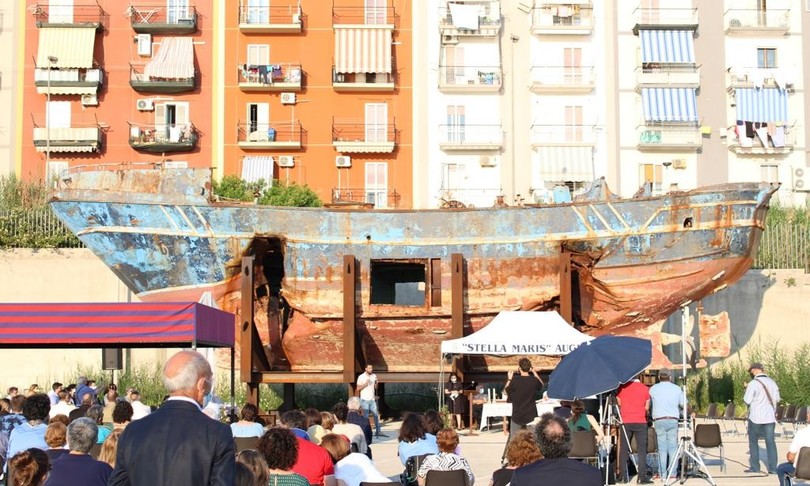 ` – The Garden of Memory will be ‘planted’ in the new dock of Augusta and the wreck of the tragic shipwreck of April 18, 2015, which caused a thousand deaths, will become supervision and testimony of the tragedies of migrants- “By the end of the year it will be ready”, the mayor Giuseppe Di Mare assures `–

On April 20, after the exhibition at the Venice Biennale of Art, the fishing boat, which sank in the Strait of Sicily – only 28 survivors – had completed the journey on a barge- On 13 June it was officially welcomed with a moving ceremony by the port city of Syracuse, for being the heart of the Garden of Memory and the Museum of Rights, a very important piece of a widespread network in the Mediterranean–

And exactly one week later, on the World Refugee Day of 20 June, the time horizon of the path that will make it possible to achieve this goal, which does not only concern Augusta, is defined: the end of 2021 thus becomes a significant historical event- Pope Francis has already made it clear: the boat of the shipwreck of migrants in April 2015 is a symbol that must “continue to appeal to everyone’s conscience and make humanity grow more solidarity”-

A project that has never stopped, assures Mayor Di Mare, “just as the collaboration has never stopped“between the Municipality, the Port Authority, the Port System Authority of the Eastern Sicilian Sea, the Navy, the Committee of April 18-” Our immediate objective – he explains – was to preserve the wreck and, then, to define the transfer to the Municipality, by the Port Authority of the Eastern Sicilian Sea, of the area in which the Garden of Memory will be built, that is, in the new dock, and we are well advanced- The Garden will be ready within the year “-

“First of all we have achieved the goal – confirms Enzo Parisi, vice president of the April 18 Committee – of making this boat, preventing its demolition, the symbol of all the tragedies and of the people forced to cross deserts and seas to seek happiness, to encourage everyone to see and address the issue of migration in a just and humane way- Those victims will come out of anonymity and in this Garden of Memory they will have a name “-

Yoro Ndao, a migrant who has become a reception and rights worker, compares the act of saving lives “to rain in the desert” and the recovery of the boat represents “the rebirth of humanity”- “Black does not mean guilty — the tools to fight against racism are there, but the political will is lacking– It was precisely in Augusta that Yoro had arrived after being saved by the Navy, “and from here we must start again for a path of memory and active citizenship that does not create new exclusions”-

By the will of the Italian government, the year after the shipwreck, the boat was recovered from the seabed with a complex operation and taken to the naval base of Augusta for the removal of the mortal remains of the hundreds of victims who had remained trapped there- Various Italian and international institutions have long been involved in the undertaking of giving a face and a name to the shipwrecked who have lost their lives-i-

At the request of the April 18 Committee, set up in 2016, the Augusta municipal administration asked that the fishing boat not be destroyed or moved elsewhere, but remained in the town to create the “Garden of Memory”-

In 2018 the Augusta City Council unanimously approved a motion by which it committed the municipal administration to take all the necessary steps to ensure that the wreck remained in Augusta “as an enrichment of the cultural heritage of the entire region, as a significant and founding element of that Garden of Memory placed as a safeguard and witness to the tragedies of migrants, as well as a sign of respect for the victims and of high value for the new generations “-

In April 2019 the wreck was sold by the Ministry of Defense to the city of Augusta which in turn, immediately afterwards, has granted on loan for use for one year to the artist Christoph Buchel to exhibit it at the Venice Biennale of Art– Its exhibition has aroused great interest and the boat is now known as “Barca Nostra”-

Various experiences have been gathered around it and the challenge it represents, like the Glomere association: “Every minute wasted in useless chatter – affirms the president Maria Grazia Patania – costs us human lives- While we speak, people die- They die in the desert, in Libya, at sea often without any hope of coming intercepted- They die in violation of any international norm that prohibits rejections that have now become a consolidated routine- Precisely with a view to active commitment, Glomere intends to cultivate the culture of peace among peoples, of legality and of contrasting any form of racism and discrimination through advocacy, awareness and fundraising campaigns in order to intervene where needed “-

“On this boat – recalls Kamal El Karkouri, operator of the Arco Porco Rosso, perhaps focusing on the central question – there were people full of dreams who had a project beyond the borders- They had left to help this country and their country- from- The boat has been recovered, but the European conscience that drowned at sea still needs to be recovered“-