Why is yoga perceived as feminine and why is it no longer so? 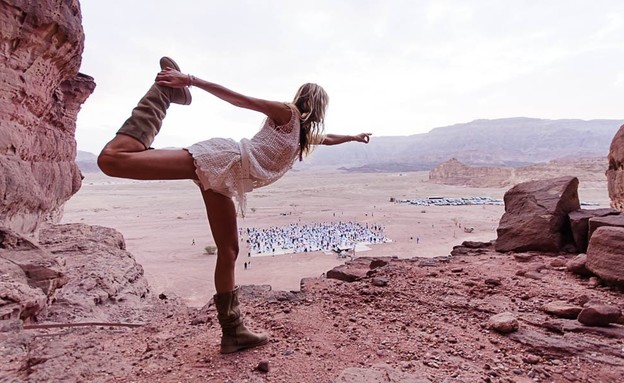 Funny how yoga, the same philosophy Spirituality and physical-spiritual training that has actually existed since time immemorial, is still perceived in a sense as a trend, despite being ancient. In any case, this “trend” is certainly neither temporary nor contemporary nor innovative. We know quite a bit about her already. For its contribution to flexibility and increasing range of motion, for improving fitness and its impact on our mental state and consciousness.

In anticipation of the International Yoga Day to be celebrated this coming Monday (June 21), Orit Ofir, Senior Yoga and Pilates Teacher and Director of a Pleasant Yoga Pilates and Dance Studio, shares with us some facts about the oldest practice that has survived the test of time and is going to stay with us. Within the 21st century.

Really not just for women: the inventors of yoga were men, and even an athlete practiced yoga

Although in the current yoga classes you will find a female majority, but traditionally the exact opposite is true. “In ancient India most of the yoga practitioners were men, the developers of the main practice methods were men, and throughout history even top athletes like basketball player Kerim Abdul Jabbar or Xian the high jumper Cornelius Johnson practiced yoga regularly,” says Ofir. So when did the women take over the field? Well, with the advent of the method in the West it has fascinated women in particular – probably because of the need for flexibility that comes to women more often than men, and not least because of the spiritual-mental connection underlying yoga, values ​​that are perceived in the West as “feminine” versus masculine values ​​like Rational thinking and supposedly free from “emotional” considerations. But as we enter the 21st century free of outdated perceptions about femininity and masculinity, more and more men are now being exposed to yoga practices, balancing the mix of practitioners, and enjoying the plethora of benefits that yoga brings to our lives.

“Think of a sleeping baby: whenever he inhales his stomach swells and contracts back on exhalation, now think about your breathing. How deep does it reach? Most likely even the lungs do not really swell with each inhale. We are born with a natural ability to breathe deeply, but the modern living environment The saturation of the stresses constantly minimizes our breathing, making them superficial and fast, “Ofir explains. “As a result, the body absorbs less oxygen, which affects blood circulation, heart function, the digestive system and, of course, brain function.”
Studies have found a link between respiratory quality and optimal central nervous system (CNS) function, sleep quality, and even bone building. All of these make the practice of breathing one of the most important skills to be invested in.

Boys and girls of the third age: Yoga can prevent the next fall

Falls in old age tend to be more frequent due to general weakness, lack of balance or background illnesses like Parkinson’s, dementia or diabetes that produce events of loss of control. In addition, due to late reaction, vision problems, weakness, poor bone density and a variety of age problems – each fall becomes much more dangerous and can captivate the injured person to bed for many months. “It has been found that regular yoga practice may be particularly beneficial – both for preventing falls and for less injury during falls in old age. As of 2016 a series of studies examining boys and girls 60 and older practicing yoga found significant improvement in balance and moderate mobility after regular practice for “Several months, in addition, the strengthening of the muscles and the density of the bone contributed to effectively stopping a fall, and minimizing the damage caused as a result of falls.”

They just look a little dirty

“Even if advanced yogis look like not very clean hippies to you – in fact they are probably the most hygienic people you know,” says Ofir. “The most advanced yogis not only practice yoga but live a yogic lifestyle that combines all 8 ‘organs’ (stages) of yoga – and physical practice is just one of them. Other stages include breathing, meditation and instructions on how to relate to the other and yourself.

Among the rules of ‘niyama’ – the set of rules for personal observation, is the maintenance of purity – that is, maintaining the cleanliness of our body and mind. To this end, many yogis follow the ancient Ayurvedic philosophy of healthy living. This includes a daily shower with waking up, applying oil to the mouth and tongue to cleanse and fight disease, and using a dry brush to cleanse toxins from the skin. So even though they may look or smell a little funny (this is probably the essential oils), devout yogis are usually very clean people, inside and out. “

The yoga poses you most hate to do: are probably the ones you need the most

How many times have you found yourself cursing your yoga teacher while still holding a pose for what seems like an eternity? “We all have the poses that make us want to fold the mattress and give up. However it is worth remembering that if our body and mind oppose a particular pose, it means that there is a physical, emotional or mental blockage that prevents us from entering it, and it indicates something much deeper: poses that require opening and stretching. Of the chest out can provoke resistance after a hard parting and suffer from a broken heart, lifting the pelvis can embarrass those who do not feel comfortable with this body area, find it unaesthetic or too large.Yoga pushes us not only on the physical level but also requires us to deal with our precipitation “Take everything out and start moving forward – in both fitness and life.”

Do not cut: The relaxation minutes at the end of the workout are the most important part

At the end of a typical yoga class the instructor will usually lead you to relaxation through a guided process called Nidra Yoga – a method of guided meditation that leads to deep relaxation and a state of substantial peace and quiet. “While there are practitioners who find the peace and quiet of the end of the class easy for others it is perceived as a‘ waste of time ’because they prefer the movement or the challenging physical aspect of yoga, and may even perceive relaxation as an embarrassing thing in front of an unfamiliar practitioner class.

“Whether you enjoy meditation moments and especially if you shy away from them, you should know that when we allow ourselves to rest and let go, our mind begins to memorize this calm state and we begin to access it more easily in our lives in general. It is the most essential part of yoga class. The energy transmitted through asana and pranayama.

“If you feel uncomfortable with meditation, try to lie down in the way that is most comfortable for you and just rest for 7 to 10 minutes, because only after this time do the nervous and endocrine systems begin to balance.”

The most important tip is to never skip the benefits of relaxation, they will allow you to reap all the fruits of yoga practice.

Did we make you want to practice yoga? Yoga Festival on the sea, Sunday-June 20-21, Herzliya Marina – free admission.
Sunday, June 20- 18: 30-21: 30
Monday -21 June -6: 30-22: 00
Dozens of workshops will be held on the waterfront with sessions tailored for women, men, boys and girls in old age, for veteran practitioners as well as new ones and this year for the first time also workshops tailored for the disabled and handicapped.
for further details