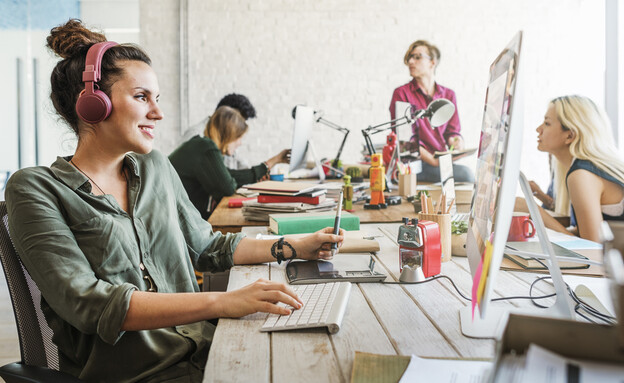 The influx of the working world into the cafes, private homes and other spaces, noisier or less, forces us to deal with different and strange noises that do not always come with a pre-order. There are those for whom the noise is good, but in most cases it is mainly a distraction and a disturbance. Of course, technology has a solution for everything, and if it is impossible to achieve silence, why don’t we create static noises that will try to neutralize any disturbance?Here you can experiment and try to adapt a variety of background noises from calm sea waves to a tropical storm.

Some of us know the world of white noise from other situations such as those that have a fan in the background while they go to sleep or a TV on. In situations where it is impossible to achieve complete silence, the static background noises can drown out all the distractions in the background, and not only that. It turns out that, at least for some of us, the various noises can even optimize the quality of work.

How does background noise affect the brain?

The relationship between different noises and their effect on our degree of concentration has been examined in quite a few studies. Classical music is already known to be beneficial for cognitive performance, a phenomenon dubbed the Mozart effect. So what is known so far about the benefits of background noise for the mind and soul? Quite a few. Listening to background noise improves recognition memory, the ability to recognize objects and events from the past, as well as abstract processing ability. It has also been found that listening to background noise improves people’s performance in creative tasks.

What more? stress relief. Natural sounds like running water and chirping birds have been shown to help relieve stress. Improving social interactions. Background music during social interactions has been found to help people feel more comfortable, which can lead them to communicate better.

It is possible that your choice to work in noise or in silence is also related to your character. Researchers at University College London found that both background music and office noise impaired introverts’ performance on tasks involving reading comprehension and prose recall. Performance in silence was the same for both personality types, suggesting that introverts have a special need for silence to concentrate.

Can the continuous sounds without the words fax those prone to any slight change in their environment? Research has found that white noise therapy may benefit people with ADHD. Other small studies have indicated that white noise may offer some benefits for improving aspects of memory and academic performance in children with ADHD.

The Norwegian researcher Goren Soderlund conducted over the past decade about 15 studies on the effects of white noise on people with and without ADHD. His research shows that people with ADHD performed better on memory and language tasks when they listened to white noise.

Is the benefit reserved only for people with attention deficit disorder? In another study, Soderlund found that people who don’t have ADHD may still benefit from quieter levels of white noise. In another study of his, dyslexic children improved their reading and memory scores by listening to white noise.

The rainbow colors of the background noise

The classic white noise is of course not the only static noise. The colored noises are cataloged according to different frequencies and include variations such as pink, brown, blue, gray, orange and more. One of the most prominent of them is the brown noise.

Pink noise is also considered more relaxing than white noise. It includes a mix of frequencies, but the lower frequencies stand out. Examples of pink noise in nature are sounds of rain falling or leaves rustling. It has been shown to show a positive improvement in work performance and several studies indicate that listening to pink noise while sleeping may help improve memory function the next day.