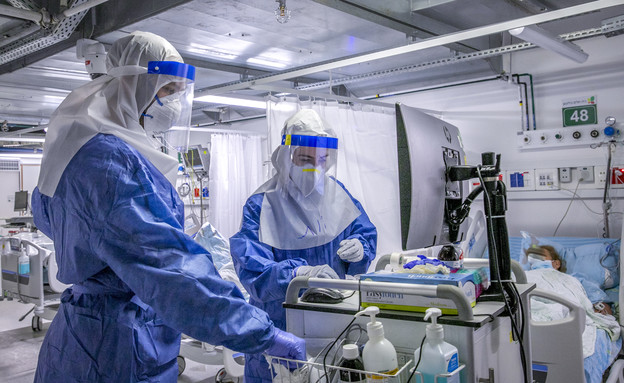 Few were surprised by the photos of the security guard next to the head of the public health service, Dr. Sharon Elrai Price. And health care professionals who dedicate their lives to rescuing patients.What is happening on social media can be defined as shocking, certainly when the fire is directed at citizens who do not have the backing of a government ministry. “I just uploaded to my page a picture of my (son) eldest getting vaccinated and I was immediately cursed,” said a man who asked to remain anonymous. “We are in mortal danger,” a doctor from a large hospital said in a conversation with Mako Health.

“Threaten a lot of people, scare them in direct and indirect ways when they are backed by a lot of money. It turns out that a lot of money, they are looking for anyone who criticizes them online and you can not write anything without receiving a threat of libel.” Nehemiah Gershuni-Ayalhu, an activist against opponents of the vaccines, described the public discussion of the epidemic care team of the Ministry of Health, which was held in the Knesset and discussed, among other things, threats against the medical staff.

When he posted a picture of his son’s birthday on his Facebook page, one of the respondents decided that this was exactly the time and place to write to him: “that the son will not grow up to be a monster like his father.” In a fake Twitter profile, photos of Gershuni’s family members were distributed and another wrote to him: “Come tomorrow at 16:00 to this address in Bat Yam.” In case the threat was not clear enough, add a curse as well. And all this only because Gershuni-Ayahu, a public relations man with over 12,000 followers on Twitter, decided to fight, for his time and account it must be said, against the denial of the corona and those who oppose vaccines.

“It’s one thing to say ‘I’m afraid of a vaccine,’ but it’s another to spread conspiracies, scare people and oppose vaccines with aggressive methods as seen on the net,” says Gershuni. “Apart from spreading Pike, they severely attack Elroi-Price and professors or researchers who encourage children to be vaccinated or reveal the truth as it is. Because I’m active against these people and expose their conduct, it turns out I’m personally attacked. “My son, that father is a monster. For me on a personal level it is less disturbing because I know the types but you can only think about how my family experiences it.”

They took a picture of a woman squirming on the street and shouting, ‘This is Pfizer’

Gershuni goes on to explain that the way he behaves in front of him and others includes slander and attempts to terrorize. “I was sued for defamation under them. There is a method and attempts here to silence by active persecution.” Gershuni is prevented from telling how the libel lawsuit against him ended, but it seems that the serial libel plaintiffs are not doing well in court. Gershuni, for his part, claims that the subject of defamation lawsuits is an organized story that aims to deter people from writing and take action against corona deniers and vaccine opponents.

“The systematicity of a very organized group that collects money, spreads misinformation on a regular basis and spreads unfounded theories. We see how it flows from the web into the public space. We saw a filmed woman being photographed on the street shouting ‘It’s Pfizer.’ I know Corona deniers who say ‘they killed my grandmother’, doctors tell me they are being threatened. ”

Gershuni explains that they are systematically looking for posts and tweets where there will be the slightest mistake to sue. Even when it is clear to them that the lawsuit is hopeless. The reason is clear: most citizens who see it prefer to maintain industrial silence for themselves.

When asked why Gershuni himself got into it, he explained that “I have about 13,000 followers, many of whom are media people, government officials and those who are at such and such key points. It is important for me not to leave the arena promiscuous to those people. “Seriously, she’s following those vaccine opponents. She’s following people who I think are very dangerous, not because they might pull out a knife.

Gershuni-Ayahu is a well-known network anchor, and is not afraid of confrontations. As part of the preparation of the article, we also talked to other citizens who received a flood of curses and threats on social media, but preferred to lower their heads.

The security guards are keeping an eye on her office. Dr. Galia Rahav | Processing: Flash 90

“You are helping to murder Israelis”

“I posted a picture of myself on Facebook a day or two after I received the vaccine against Corona. I wake up with a full response that included curses and threats. Write to me that I am assisting in the murder of Israelis and other very harsh statements. I wanted to block and make the post only friends, “So it was not helpful. I just deleted the picture and blocked a lot of people,” a resident of the country who asked to remain anonymous told us. He chose to be interviewed anonymously because he said, “These do not see with the eyes, that’s why I have no head to get into all this mess again.”

“I wrote down your name. We’ll meet again.”

Those who still feel the danger on a daily basis are the doctors, especially those who work in the corona wards. A doctor we spoke to told how just a few days ago following the death of a Corona patient, he and his colleagues suffered an attack. “Corona patient died in the ward and the family started yelling at us that we were murderers and cursing. That it was already normal, not something new. When I left the ward one of them told me he had registered my name and we would meet again. It’s really scary.”

But this is not an isolated incident. “It’s not something out of the ordinary. There were family members of the deceased who pushed us and were actually arrested by the security of the hospital. It’s enough that someone recognizes you as a doctor on the street, on a day off, in case you know who you are and you are in the Corona ward. It does not matter to them if you are in a car or in a mall with the kids. ”

The director general of the Ministry of Health, Prof. Nachman Ash, also said that he was threatened and under severe attacks. “There are real threats,” he describes, but adds that he personally does not let it get into him. Public figures and the health system work very hard and work day and night for the patients and all Israeli citizens. In return, they absorb threats and harsh curses, and that’s just awful. ”

Many doctors, including well-known ones like Professor Galia Rahav, have filed a complaint with the police. “At my hospital the security guards were instructed to keep an eye on my office. It seems absurd to me that a person who dedicates his life to saving lives and maintaining health suffers such harsh curses and threats,” described Professor Rahav, adding that her daughter, a doctor herself, suffers severe threats.

“The situation on the ground, in the wards, is just awful and it’s only a matter of time before blood is shed here,” a doctor who asked to remain anonymous tells us. Someone, or rather a ‘very organized group’, made the doctors and nurses enemies of the people, just like that. And the enemies of the people should be killed. How can it be that from a situation where they applauded doctors on the balconies, I walk around apprehensive and scared of my family members. And I’m really scared. If a doctor or nurse tells you they are not afraid of what is happening today, then I say they are just lying. “Senior members of the system and those who appear in the media, on the one hand, absorb the hottest fire and the most severe threats, but at least they are secured.”

All the people we talked to are talking about real systems madness led by conspiracy theorists. And who are those people? These are a very wide range of characters ranging from scientists, through opinion leaders on social media to completely ordinary citizens who have decided to wage a real fight against anyone who supports vaccines.

Ivy Benjamin, a social activist known among other things from the demonstrations in Balfour, says that many of the opponents of the vaccines and deniers of the Corona were in the past his close friends. That is precisely why he decided to go to war against them. “When I see who is running these anti-vaccine demonstrations, people who I thought were my friends, who are rational and turned out to me as anarchists talking nonsense about population thinning that the Ministry of Health wants to murder, I realized I should not have such friends and should fight it,” he says.

I am one of the leaders of the Balfour Protest and it pained me to see that many of my good friends, who were brothers in the struggle and I have a lot of appreciation for them, have become cobidiots who shame the Balfour protesters. Together with Costa Black, who was one of the initiators of ‘Comedy’, an idea arose to set up a WhatsApp group and fight online on Pike News. Torture them and shame them. ”

As a social activist he began to be involved, following the human economic harm to civilians brought with it by the Corona. “As a social activist I saw the suffering the country went through in an era of lack of vaccines. I mean, poor corona, businesses closing, bankrupt or closing. I want a country that will not be poor. If there is a solution in the form of medicine or vaccine, then that’s the best thing. Second I’ve discovering a Pike News industry that’s the worst. Because you’re allowed to be afraid. But you must not spread lies because it’s already a crime. “The same thing in an epidemic era. Now, they do not want to say they are against vaccines. So they say we are against a green label, in favor of democracy and that is lies.”