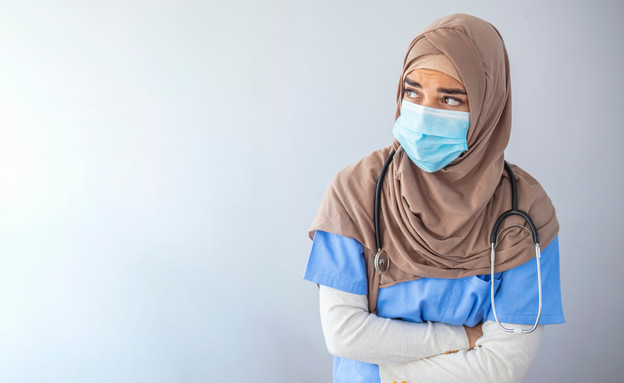 As soon as the threat of the global epidemic became tangible, Israel went to war. And just like in the war, the doctors who stood at the front risked themselves and became heroes. We all (still) remember the applause at 18:00 from the balconies for the benefit of Israeli medical personnel, excited when Prof. Galia Rahav from Sheba Hospital sheaved a beacon in honor of the medical staff on the 72nd Independence Day of the State of Israel.

But when one-fifth of the women and health staff in Israel are Palestinian citizens, Israeli heroism has been given a new and interesting, but not always pleasant, face.

At the center of a new study conducted by Dr. Guy Shalev, a medical and political anthropologist in the Buber Fellows Program at the Hebrew University, and recently published in the scientific journal “Israeli Sociology”, in the issue “Society Meets an Epidemic”, a series of interviews with Palestinian doctors Audience focuses on the experiences and perspectives of Palestinian doctors in their work in hospitals and in the community, in times of health crisis and in unprecedented positive visibility as Palestinians in the Jewish-Israeli public. The health of the Israeli public, with the aim of challenging the exclusion of Palestinian citizenship and citizenship in Israel. . All the findings of the study were presented as part of the conference “Days of Plague: The Effect of the Corona on Jews, Arabs, Relations and Conflict,” held at the Truman Institute at the Hebrew University on June 16 on the Mount Scopus campus at the Hebrew University.

The “problem” at the heart of the study is the tension between the increased visibility of Palestinian medical staff members of Israeli citizens while dealing with the corona plague, and their belonging to a moderated and discriminated minority in the State of Israel. This tension, intensified by the military manner and the militant manifestations of the health crisis during the response to the plague in Israel, has placed Palestinian health men and women as key players in the national-political field.

As part of the work, an anthropological study was conducted with funding from the Truman Institute for Peace Studies, based on in-depth interviews with 30 Palestinian doctors and Israeli citizens, as well as with activities and social activists. The purpose of in-depth interviews is to hear through close and open conversation about the interviewees’ experiences, perspectives, hopes and expectations in the complex set of these tensions, and to explore the potential and limitations of the medical field. Through these interviews, the researcher examined a number of points between them – what happens when doctors become involved in national politics ?; What political horizons are opening up, and what are their limitations ?; What are the implications for Palestinian doctors, for the Palestinian minority in Israel, and for the Israeli public health system?

“Enough, I can no longer constantly beg, constantly use my medicine to prove myself”

This research is based in part on Dr. Shalev’s doctoral dissertation, conducted at the University of North Carolina in the United States and funded by the National Science Foundation (NSF). Fieldwork. As part of the study, an observation was made in two hospitals and an interview with female students, doctors, women administrators and politicians. “It was not consistent. Moreover, he concluded that the rules of pollution and purity in health systems apply selectively to Jewish-Israeli and Palestinian physicians, with neutrality acting as a mechanism that silences and suppresses Palestinian nationalism.

The interviews with Palestinian doctors and physicians in the present study raise mixed feelings about the emphasis on the medical profession as a political lever for the recognition of civil and collective rights. On the one hand, some of the interviewees expressed satisfaction that they recognized their hard work and their important contribution to society and the health system, especially during the exhausting burden of dealing with the corona plague. On the other hand, the doctors felt uncomfortable with the separation that many in the Jewish-Israeli public make between them, as life-saving and good-natured doctors, and the rest of their people and their political representation as an existential threat. Some doctors protested strongly against these campaigns and felt that they were discounting the medical profession and imposing conditions that were impossible for Palestinians to be accepted as citizens and as part of a community with political rights.

More in-mako health:
>> Why do we constantly pee? Maybe this will surprise you
>> Experts warn: Corona symptoms have changed
>> We were surprised: just do not do it before sex

Interviews with activities and social activists who initiated and led campaigns during the Corona, centered on Israeli and Palestinian health men and women (7 interviewees from 5 different initiatives), show that the health system was carefully selected as a field for initiative and activity. For the leaders of the campaigns, the hospital provided a framework during the crisis in which the image of Palestinian medical personnel could be used effectively to advance a political agenda. They wanted to oppose the demonization of Palestinian citizens in the toxic political discourse, in order to make their participation in the political game legitimate and to emphasize cooperation, partnership and community. Everyone stressed that they consider hospitals as a model for society.

“[הרופאה הזו] She is a heroine. She rescued an Israeli patient. I mean, she … is hated here every day, she is treated badly, but she saved an Israeli patient. The goal is that as if you see it and understand, and that you have the thought that they are not supporters of war, they are not haters of Israel, they are here for all of us “(Assaf Kaplan, political activist, May 2020).

In conclusion, the initial findings that emerge from the study indicate that the political imagination of Jewish-Israeli activists does not always match the experience and hopes of the doctors and physicians, who place them at the forefront of their campaigns. Although visibility and heroism undermine exclusion and demonization, a ideological framework and professional ethics place glass ceilings on the path to national collective recognition.

And there are also thoughts of practical change following the study. Dr. Shalev says this week that “As part of the chair of the board of directors of Physicians for Human Rights, we are currently initiating a project that will initially last two years, as part of which we will hold an intervention program in hospitals in Israel. “A partnership based on the acceptance of the other in his full identity, as part of a community with history, aspirations and collective rights. The project strives to allow companies and members of health teams the security and freedom to express their full identity, including the national one.”