Many countries store the entire population in a booster 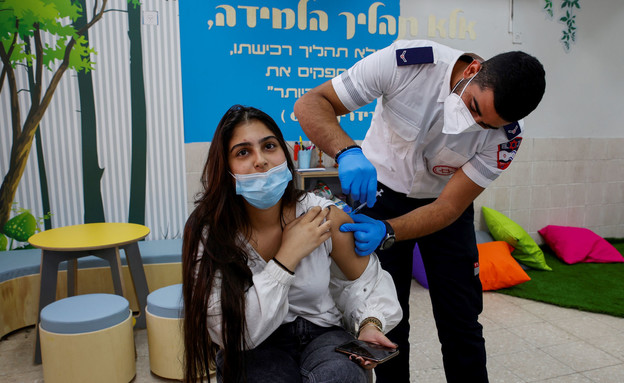 About two weeks ago, the children’s vaccine was approved in the United States, and as of this writing, nearly 1.8 million children under the age of 12 have already received the first dose. Next week, the first of them will start receiving the second dose and a little later the picture will become clearer regarding rare side effects – if any. According to expert estimates, no surprises are expected, not to mention the fact that due to the low dose of the vaccine for children, fewer side effects were observed in the clinical trial, and these side effects were also very rare in adolescents aged 12-15.

While in Israel the vaccination campaign for children is delayed due to delays in supply, the United States is in a race against time against the virus. According to data published by the American Academy of Pediatrics (AAP), in recent weeks many places have seen an increase in the infection of children, so quite a few children are expected to be infected before they can be fully vaccinated. Fortunately the disease is passed on to children in a very mild way usually, but when the number of patients is very high even a low complication rate is expressed in a great deal of suffering of those who have nevertheless become severely ill.

The main problem here is not the children, but the veteran vaccinated. The same decline in immune protection observed in Israel at the beginning of the summer is now being observed in more and more countries and the rate of distribution of the booster dose (the third dose) to those eligible does not meet expectations. As such, adult morbidity is rising alarmingly in Europe and the United States and is becoming a real problem.

Four months ago, quite a few eyebrows were raised around the world when the Israeli Ministry of Health decided to recommend an impulse dose without significant clinical information on its effectiveness. It is now clear that this decision has saved quite a few lives, and well-vaccinated countries have internalized it and are encouraging their residents to get vaccinated for the third time. In the United States, which has so far approved a booster dose only for adults over the age of 65 and people at risk, more and more states, including New York, California and Arkansas, have independently decided to vaccinate their residents once again, even though the Food and Drug Administration (FDA) has not changed His guidance. It is estimated that in another discussion to be held soon the FDA will expand the indication for vaccine in booster dose.

Meanwhile in Europe the morbidity continues to surge, and countries seeking to distribute impulse doses to their citizens are experiencing inadequate responsiveness. Germany, which has so far vaccinated only five percent of its residents in the third dose, has announced the extension of the booster vaccine to anyone who has had six months since being vaccinated in the second dose.

Gibraltar, the small British territory that ranks first in the world in the rate of vaccination against the corona virus, is now experiencing an increase in morbidity and is building on a vaccination campaign for children and a booster dose for adults. Given that only about 30,000 residents live there, the operation is expected to end soon. The UK itself, which has so far vaccinated 16 per cent of its population on the urge, is already starting to see results. A report by health authorities in the kingdom indicates that the effectiveness of the vaccine has been restored in those aged 50 and over who received the booster dose.

In Israel, the age group of teenagers under the age of 16, who started getting vaccinated in June this year, is starting to reach the date of the vaccine’s decline, and it will probably soon need an impulse dose as well. The findings of studies on older age groups have shown that there has been a decline in vaccine protection, and so far all measures of vaccination in adolescents have been similar to adults, so a similar phenomenon is likely to be seen in them as well. However, up-to-date data on the subject have not yet been released.

The Ministry of Health has two options. The first is to take advantage of the relative remission in morbidity and wait for serological findings on the status of antibodies to the corona virus in the blood of the first vaccinated. At the same time, they will have to ask Pfizer for data on the condition of the participants in the clinical trial of a vaccine for teenagers performed in the spring and prepare for a rapid vaccination operation as soon as the morbidity returns. A second option is to decide that this time not to wait, and to rely on the vaccine profile, which has proven itself both safely and effectively in the first two doses and in the impulse vaccine given to young adults as well. Another option is to space between the first and second dose, thus “saving time” in case the morbidity in children increases significantly and perhaps in this way it will be possible to prevent or reduce the next wave of morbidity.

This is not a simple decision with many consequences, not all of which are healthy. Should we rely on the relative protection from a serious illness that the fading vaccine also provides for its recipients, and on the children’s immunization campaign that will begin soon, and hope that not many adolescents will be infected, or start vaccinating and risking a low response. The Ministry of Health’s Immunization Surveillance Committee will soon be required to answer these questions, as in less than a month the first adolescents will cross the five-month line set as the minimum time for receiving an impulse dose.

Drugs and vaccines for developing countries

Two important announcements released this week could change the global morbidity picture, especially in poor countries. Pfizer announced this week that if the new drug it developed would soon receive FDA approval, it would sell it at a discounted price and allow it to be manufactured in 95 developing countries, which together have more than half the world’s population. Along with the drug from Merck, which was also submitted for FDA approval, the hope is that this move will significantly reduce the morbidity in most countries of the world – assuming of course that both drugs are indeed as effective as the companies declare. Such a move may lower the The pressure Pfizer is forced to give up its patent for its vaccine, which is likely to be its very central revenue engine today, especially given the growing need for impulse doses.

A second announcement came from the US administration, which has stated that it will invest billions of dollars in expanding the country’s vaccine production system, to a billion doses per year by the end of 2022. This move follows international pressure on the administration The alliance imposes impulses and now also vaccines for children, while many other countries fail to vaccinate even all the people in the risk groups. Such a move would increase the supply of vaccines and allow more and more people around the world to get vaccinated.