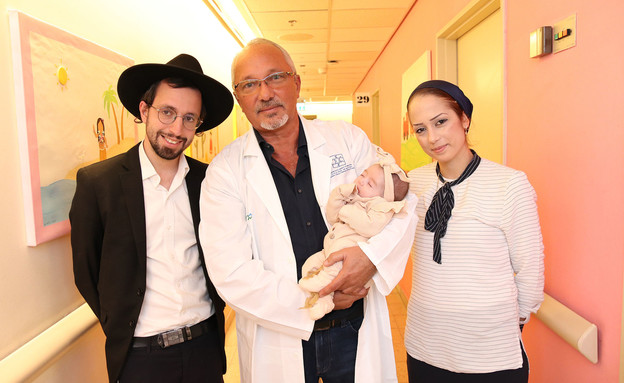 A 3-and-a-half-month-old baby, weighing 3 pounds, arrived at the Schneider Center for Pediatrics, following a gradual weight loss and increased vomiting, which began immediately after birth. Following follow-up imaging tests, the suspicion was raised that the baby was suffering from a defect in the development of the diaphragm formed during pregnancy. The defect causes part of the stomach to slide into the chest cavity instead of being entirely in the abdominal cavity, and presses on the heart and lungs. This problem can lead to lack of weight gain, vomiting, and even the formation of around the stomach – a dangerous emergency that can lead to necrosis and life-threatening.

Upon the baby’s arrival at the Schneider Center’s Surgical Department, the department’s director, Dr. Dragan Krabroschitz and his team, decided to perform surgery to repair the diaphragm defect with a minimally invasive approach, which eliminates the need to open the abdomen and allows for faster recovery and shorter hospitalization. And also aesthetically pleasing, however requiring advanced equipment and high skill from the team of surgeons and anesthetists.

Patients at such young ages and at low weights are significantly more exposed than adults to gas pressure volatility in surgeries performed with a minimally invasive approach, so during surgery an innovative system was used for the first time to monitor the gas pressure flowing into the abdominal cavity. This system allows constant pressure to be maintained and monitored throughout the operation, in order to reduce the prolonged absorption of carbon dioxide into the soft tissues of the baby.

The operation ended without complications, and the baby began to breathe on its own and eat a day later.

Dr. Kerbrushitz said: “We are pleased that we have been able, through teamwork and collaboration between the various services, to help the baby and her family undergo this type of complex surgery. The first use of the innovative gas pressure monitoring system is a significant step forward in terms of maintaining maximum patient health and safety during surgery. We in the surgical department adhere to technological innovation, and experience with tools that allow us optimal accuracy for improving the performance of the surgery. “