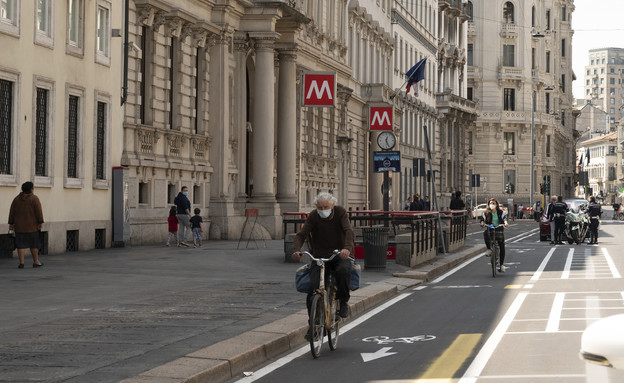 The whole family has not been vaccinated, and they belong to the group of vaccine opponents of the far-right party in Italy no-vax. Their opposition is so strong that they enrolled their first daughter in a kindergarten across the border in Slovenia, where child vaccinations are not mandatory.

The 45-year-old mother, a teacher by profession, in the sixth month of her pregnancy, contracted neglected pneumonia. Her condition worsened without anyone thinking to check if it was related to a corona virus infection. Her condition deteriorated and she also suffered from hypoxemia, a severe decrease in blood oxygen. At this point she was evacuated to the hospital where she was found to be suffering from infections and kidney failure. Doctors defined her illness as a ‘cruel’ sore throat, she less and less responded to treatment and so it was decided to transfer her to another hospital, for Acme treatment.

Due to the lack of oxygen, there was a fear that it would also affect the fetus and that it would suffer brain damage after birth. The woman is at the end of the fifth month of pregnancy, an early stage still for cesarean section and therefore according to the doctors the fetus may suffer from severe brain consequences.

Protest of the unvaccinated in Italy

Italy is in a relatively good position compared to Europe in terms of immunization percentages with over 84% vaccinated with 2 vaccines, but there are organized far-right groups that have joined forces with the vaccines and are causing quite a bit of uproar. Last week dozens of protesters against vaccines invaded a hospital emergency room and an attempt was made, blocked by the police, to storm the Italian parliament. It is estimated that about 7 million Italians who are eligible to receive the corona vaccine have chosen not to be vaccinated.

The Italian government is soon considering imposing severe restrictions on the unvaccinated similar to Austria. Five district governors in the country have called on the prime minister to take immediate action against those who are not vaccinated to stop the wave of morbidity. “Nowadays, when people have the opportunity to be vaccinated and protect themselves and their environment from the corona, there is no reason for the vaccinated to suffer another closure.” Said the governor of the province of Friuli-Venezia, of Similiano Federiga. “Restrictions should only be on those who are not vaccinated.”