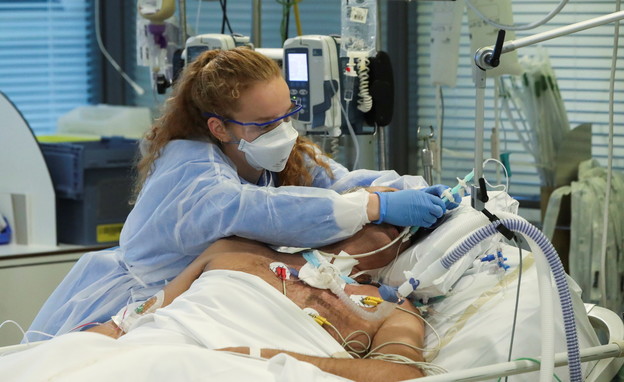 In recent weeks we have reported on The continuing rise in morbidity in Corona in Europe, and the countries there are making efforts to vaccinate as many people as possible in an impulse dose (third dose) in view of the decline in the level of protection afforded by the second dose. Austria Entered the closure this week In an attempt to stem the rise in morbidity, and the Netherlands are about to take similar steps. Immunization rates They stand at 66.5 percent and 73 percent respectively, but as we already know the protection from infection decreases significantly after half a year so more and more people are exposed to the particularly contagious variant of the corona virus. In Austria, 14.5 percent of the population has already been vaccinated with booster doses, but in the Netherlands they are lazy.

Despite the severe condition, mortality and morbidity are much lower than they could have been had it not been for the vaccine. Evidence of this can be seen in the high mortality recorded in countries such as Romania, where the immunization rate is low. So the situation in Austria, the Netherlands, Belgium and other countries could have been much worse.

But unfortunately the protection afforded by the vaccine is not absolute, and some of the vaccinated will still be infected, as this is a very contagious disease. When there are so many infected, it is enough that a very small proportion of them will suffer from a serious illness for the numbers of patients to be severe and the dead to increase very significantly. There is no wisdom in this matter, so working countries are hard at work to reduce morbidity. In Israel, they succeeded in stopping the fourth wave thanks to the rapid distribution of impulse rations. In Europe some have missed this train and are forced to adopt a policy of closures and restrictions on the public. These measures are causing public unrest and have even been reported in the Netherlands Violent demonstrations Which ended in the shooting of police officers. The situation is not good.

In the UK, immunization is performed in a beautiful advanced booster dose and the rate of immunization in the third is approaching 20 percent of the population. The results are already evident in the field, in the figure Decreased infection Especially in the age groups that received the reinforcement. More and more countries seem to understand what Israel has already implemented in the summer – the key to getting out of the wave of morbidity with a minimum of restrictions on the public is the restoration of immune protection from infection.

In the United States, the vaccination of children is being vigorously pursued until the time of writing We were vaccinated There are already more than three million children under the age of 12. No unusual incidents have been reported so far, and the Centers for Disease Control and Prevention (CDC) is expected to publish a first report on the vaccination campaign soon.

Next week, children will start vaccinating the second dose of the vaccine there. It is also the stage that worries quite a few parents, following the rare side effect of myocarditis (myocarditis) documented in the relatively young vaccinated population of 30-16 year olds. In cases where this side effect occurs, it happens within a week of giving the vaccine. The health authorities are paying close attention to this phenomenon, so if it turns out that it also affects young children, we will see it in the data that will be published in the coming weeks. Similar to Israel, the EU is not waiting and the European Medicines Agency (EMA) Recommended today It also approves the children’s vaccine.

In Israel, vaccinations for children aged 11-5 began this week, in parallel with signs of a renewed increase in morbidity. In the meantime, the operation Conducts on who rests And parental responsiveness is mediocre. looks like Most of the new infections They come from the unvaccinated population or that of veteran vaccinated who did not receive a booster dose. A particularly high proportion of those infected are children.

Meanwhile New variant Of the corona virus, which has been detected in several districts In South Africa and Botswana, there is concern in the scientific community. The new virus has accumulated 32 different genetic changes (mutations) compared to the original virus in the Spike protein, against which the existing vaccines work. Because of this, there is a possibility that he will have some ability to evade the vaccine. Of course, similar concerns have also arisen with respect to previous variants, and so far they have been dispelled. Hopefully it will be the same this time as well.

Another important point to keep in mind is that spike is also the protein responsible for infecting the virus, as it is the one that binds to our cells and allows the corona virus to penetrate into them. Changes in it may also impair the effectiveness of the virus, so in theory a more elusive but less contagious virus may be created. We’ll find out soon. In any case, health authorities around the world are now expected to closely monitor the distribution of the new variant and its patterns of activity. Hopefully we will not hear from him again.