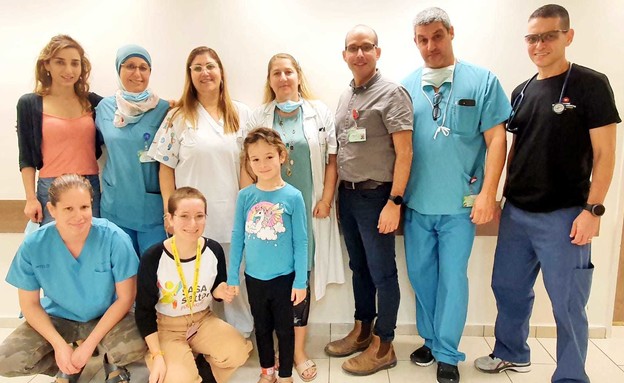 Like any girl in compulsory kindergarten, the 5.5-year-old Mia went to kindergarten about three weeks ago, but no one imagined that a routine day would end in a severe and dramatic esophageal injury and complex surgery. “That day Mia apparently fell and was injured from a chair,” says her mother Bell Brahms, herself a doctor who specializes in the neurology department at Meir Medical Center. “Mia calmed down pretty quickly and showed no signs of distress. In the evening, at her home, her father noticed that she was snoring and had difficulty drinking water and she complained that she had a sore throat. We decided not to waste time and get to the children’s emergency room in Meir quickly.”Upon arrival at the emergency room Mia was quickly rushed to the trauma room and examined by a pediatric emergency room and trauma team, who noticed air in the chest area. On examination, air bubbles were felt under the skin in the neck area. Mia was urgently sent for a CT scan, There is indeed diffused air in the chest area and neck, and in light of this she was immediately taken into the operating room to look for the source of the air leak. “Examination of the throat, trachea and esophagus found a small rupture in the esophagus through which air and saliva leaked that endangered Mia, as the saliva could enter the sterile tissues of the neck and cause a widespread infection in the neck and chest,” explains Dr. Yaniv Avner.

Mia began receiving antibiotics and was admitted to the pediatric intensive care unit for follow-up. Her mother says that after two days and after the fever rose, the doctors suspected that an inflammatory process had begun and that the hole did not close naturally. The blood tests performed on her did indeed find high levels of inflammation in the blood that lit a red light for the intensive care specialists. In light of this, it was decided to put Mia in for surgery to drain the air and saliva.

According to Dr. Sagia, Director of the Department of Pediatric Surgery, “When it comes to children, unlike adults, there is a high chance of success in conservative treatment that includes secretion of secretions and nutrition that is not oral but intravenous. Only after seeing that there is no leakage from the esophagus can one gradually switch to an oral diet. “In the operation performed on Mia, a neck drain was inserted up to the entrance to the chest in order to drain the secretions and saliva, in order to allow self-healing of the esophagus so that it can close on its own.”

For about three weeks during which Mia was initially treated in pediatric intensive care and then in the pediatric surgery department, she was unable to eat and drink normally. At first it was fed through a vein and later also through a probe. “In recent days we have gradually moved to liquid food and then to soft food. About three days ago Mia underwent an examination that showed to our great joy that the hole in the esophagus was closed and we can finally say that the drama is behind us, “says Ima Bell. It was a difficult experience for us and for us, Mia’s recovery is a real Hanukkah miracle for us. “