From cosmetics to strengthening the immune system 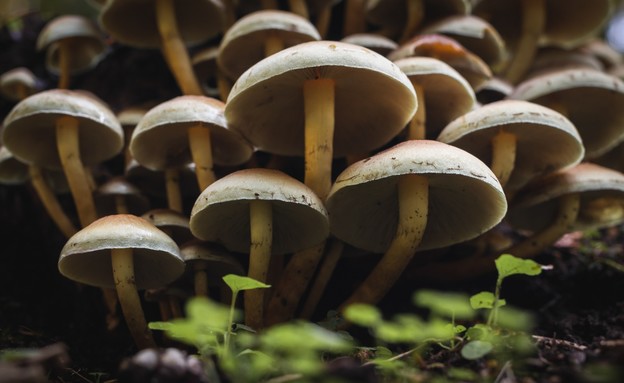 Two years ago, the movie “Fantastic Mushroom” was released on Netflix, which described it in a spectacular way The variety of qualities of the fungus in the fields of food, medicine, consciousness expansion, biological rehabilitation, nerve cell formation and anxiety treatment. Science is constantly researching their properties and ability to cure diseases, and in recent years there have been various chemotherapeutic drugs that contain different strains of fungi. Is it time to replace paracetamol, coffee and vitamins with regular consumption of medicinal mushrooms?”Already 5,000 years ago, the Chinese understood the power of mushrooms,” says Ella Wendel, 68, enthusiastically. Wendell studied pharmacy and naturopathy and was on her way to a medical track, until she decided to change track and specialize in nutritional supplements and homeopathy. In 2012, she met the founder of a mushroom growing company named Kobi Cohen, who offered her to join him on the mushroom journey. Although she had already seen retirement on the horizon, something attracted her to explore, study and join the journey.

“Kobi and Nachshol Cohen founded the company Mykolivia for growing and selling mushrooms after their father contracted grade 4 cancer, and the doctors gave him a roof over a few months. Kobi gave his father the mushrooms and he ended up living another 4 years. I always wanted to get cancer, because I have A nurse who fell ill 9 years ago and saw what happened in the hospitals, so I told myself that I would open a clinic only for cancer patients. Today I am writing a book with naturopath Sharon Tzur, which explains the variety of medicinal fungal effects. One will recognize these mushrooms.

The fungi communicate with themselves

In which medical cases do you treat with the help of the fungus?

“I have had about 100 cases of grade 4 cancer that I have treated. Cases that have tried almost everything, and with the help of the fungus we are witnessing cases of complete recovery and significant relief in most of the side effects of the treatments. They have no side effects and do not interfere with any medication.

How do fungi affect the body?

“The fungi can talk to each other even if they are not close to each other. Although they grow underground on rotten trees, they have discovered that they have an underground web as the most sophisticated Internet network in the world. It turns out that the fungi communicate with each other underground and can feed on each other “In the human body they do the same thing, the fungus knows how to work against our body’s immune system and understand what it needs to do inside it to be balanced.”

How is it different from other vitamins that strengthen the immune system?

“Mushrooms know how to work miracles and wonders, not only in cancer. For example: Mighty mushrooms know how to balance sugar like no other mushroom can. It also balances everything related to the female hormonal system. Jordan mushrooms for example are very effective in diabetes, sugar addiction and cholesterol lowering. There are also various chemotherapy drugs that are made from mushrooms. ”

When someone with cancer comes to you, does he stop getting the conventional treatment?

“Never. The integrative combination is much better and I also never tell anyone to stop medical treatment. I am not a doctor, but I also have patients who decided not to do the treatments and asked to take only the mushrooms and recovered completely. Each case individually and one is not similar to the other .

More than 4 years ago, the husband of a girl named Tal, 28, a mother of a child, called me and told me that he must have his wife. She was diagnosed with a rare lung cancer, she underwent surgery and she is in an acute condition. He emailed me the tests and I was scared, her condition was really difficult. We used the mushrooms while undergoing chemotherapy, and after something like 8 months, I got a call from them and they told me the findings were gone. She already had liver metastases, it was the second or third time I had seen such a thing. The doctor said it was a medical miracle. “Half a year after she finished the treatments, she became pregnant again.”

How do mushrooms help you personally?

“I take Agrocus mushroom every morning, which works on everything related to the skin. It also protects the bones, against osteoporosis. I also take Reishi, which is the queen of mushrooms and is excellent for the back, liver, blood and it is also very soothing. The third fungus I take is hyrisium , A fungus that works on the nervous system.It is good for dementia, attention and concentration, it is also great for chronic pain, and I use it a lot also for people who suffer from the pain of cancer.

Which mushrooms are mainly used in the country?

“We in Israel work with 9 different fungi. Tremla, for example, is a new fungus in the country, which causes glowing and moisturized skin. Abroad there are also cosmetics from Tremla and it is amazing, hope it strengthens the libido.

The connection between mushrooms and post-corona

Tal Legziel and Guy Dagan started the company Masilium about a year ago and their business combines a nursery with a growing store. “Our product is the culture of the medicinal mushroom and we also have ready-made growing mushrooms. We mainly deal in growing. 10 years ago people were almost not interested in mushrooms and today it is a kicking trend.”

Why did you decide to turn the mushrooms into a business? What attracted you to them?

“I personally suffer from cholesterol problems, I took an insane amount of pills. I also have a thyroid problem, and my whole family suffers from it. I decided to go for mushrooms and it just worked. Over time I discovered more and more about the values ​​of mushrooms and science continues to tell us. I “I take Cordyceps mushrooms, Reishi mushrooms, Lion’s mane mushrooms and oyster mushrooms on a daily basis, and in addition I sometimes take Chaga mushrooms, which are grown in Siberia and Northern Europe.”

Do you think it replaces a healthy lifestyle?

“I do not maintain healthy food. I still eat McDonald’s, I own a busy business and I do not have a healthy lifestyle. Since I eat Cordyceps every day, I am much more energetic than I used to be.”

What health problems do people come to you with?

The mushrooms are not addictive

Naturopath Yigal Kotin uses mushrooms on a daily basis. “I personally use Reishi and Cordyceps to strengthen myself. Do not stimulate me, it is not coffee. It works at the level of the adrenal gland and the body does not develop a dependence on the fungus. Since I take it, I feel it very well. I feel I have more strength and durability during the day.” .

What are the main benefits of mushrooms?

“Today research is already confirming the benefits of mushrooms and showing it in a scientific way. In the end we are looking for anti-aging substances that will make us young and strong, and that will also be safe and without side effects. The beauty of mushrooms is that they are suitable for many people and they really excel. “They do not come to work on something small, or on a specific organ, but they really work on a lot of substances in a very harmonious way. They are not too violent or strong and there are no side effects from the fungi. Side effects must be found by force.”

In what situations can the fungus be dangerous?

“In situations of autoimmune diseases, that people take different medications need to be tested. Sometimes it can be problematic for people with stomach sensitivities.”

4 most common medicinal mushrooms in the country:

Reishi / Gnodrama – It is a fungus that grows on trees, it is very strong and comes from Chinese medicine. Used to strengthen the immune system, it can strengthen the body to deal with cancer and weaken the activity of cancer cells. There is activity here that restores the liver and strengthens the liver, and strengthens the nervous system. Good for inflammation, fibromyalgia, chronic fatigue. It has action and soothing energy. Its effect is not fast, it is right to take it over time and it is very suitable for conditions of chronic diseases like diabetes, hypertension, Alzheimer’s. It is very safe to use, and has no side effects.

Cordyceps – A very rare and special fungus that grows on the backs of larvae. A very special fungus that comes from China, where it is used for fertility problems. It is very good for the kidneys, it strengthens the immune system and the adrenal gland and has positive effects in situations of chronic fatigue, exhaustion, hypertension, diabetes and more. It is often used together and brays together when you want general strengthening, for people who suffer from inflammation and pain, fibromyalgia, corona, it is the plants for corena. Reishi and cordyceps are the herbs for healing corona. And also for recovery from the corona. It is important to know that they are very safe to use, and its ability to heal is wonderful.

Shitki – It is also an edible fungus, but when it is extracted, it is seen that it mainly does an activity that strengthens the immune system. It raises white blood cells and even improves certain cancers for example colon cancer. It is also good for gastrointestinal infections, for immune weakness, along with chemotherapy drugs.

Mitki – A very popular medicine mushroom. A fungus that comes from Chinese medicine, and is also very good for strengthening the immune system. In addition it improves liver function. Research shows that this fungus is also effective for Candida and ovaries and polycystic ovary, as well as for helping with type 2 diabetes.