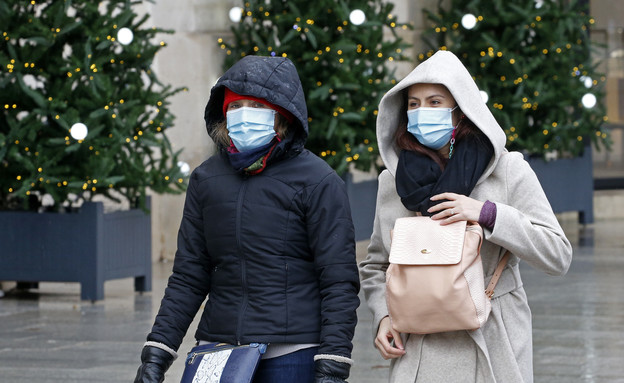 It has been a year since the US Food and Drug Administration (FDA) approved the first vaccine against the corona virus and the rules of the game in the war against the global epidemic have changed. Since given Over 8 billion Vaccine doses all over the world, of which about 2.5 billion in China, about a quarter and a quarter in India, another billion and a quarter in the United States and EU countries combined and the rest in the rest of the world in a very unequal way. The events of recent weeks illustrate to us that until the whole world is vaccinated, no country is protected.

European countries continue to face the current wave of morbidity, as more and more cases of the new Omicron variant appear. in the UK report This week on varietal infections that have not recently spread outside the country, indicating that the virus is already circulating in the community. Following this the United Kingdom returned the Duty to wear masks In closed spaces, but this step will probably not be enough to stop the spread of the omicron in it.

Last week we wondered at the expense of which immunized country we would learn about the behavior of the new variant. It seems that as in previous waves, this time too Britain will be the focus of a prominent eruption. In the United States, too, the number of those infected with the Omicron variant, which is currently identified, is rising About a third From the United States. In Israel there are still only a few diagnoses, but it is quite clear that here too it is only a matter of time and that soon the Omicron will compete with the Delta variant for dominance in the local population.

In the meantime, preliminary information on the effectiveness of the vaccine against the new infectious variant is beginning to flow. This week, three studies from Germany were published, South Africa And Sweden, as well as a press release on a Pfizer study, which tested the ability of vaccinated and recovering antibodies to neutralize the virus and prevent it from infecting human cells under laboratory conditions. The good news is that antibodies are still effective to some degree, the bad news is that their effectiveness is much lower (30-40 times) compared to their effectiveness against the original virus. Here an advantage has been observed for recoverers who have been vaccinated or vaccinated in a third dose. More studies will be published in the coming weeks and the picture will become clearer.

It is important to keep in mind, however, that the ability of neutralization tests to test the effectiveness of a vaccine is very limited. The neutralization tests conducted for Variant Delta about six months ago also yielded results Disappointing results, and yet the vaccine is effective against it. The only way to learn about the effectiveness of the vaccine against a new variant is in the field test, according to the numbers of those infected, the immune status and the severity of their disease. The coming weeks will teach us a lot.

I put together a table with a comparison for all three studies about Omicron neutralization focusing on the implications for Pfizer vaccines. Will try to update as more information comes. pic.twitter.com/MWNZZ9QpRq

Meanwhile in South Africa, which is facing a big wave of morbidity in the new variant, Transmit cautious optimism Regarding the severity of the disease it causes. Initial reports speak of less severe morbidity in Omicron infected, which may indicate that the virus is less violent, but may also stem from the young age of most infected. We will also receive an answer to this in a few weeks. Another question that needs to be asked pertains to late complications of the disease that appear only a few weeks after infection, such as multisystem inflammation in children, persistent symptoms (long-coboid) and more. We will also begin to receive answers to this in the coming weeks.

Child immunizations: data on the way

In the United States, we have so far vaccinated about five million children under the age of 12 against corona, of which about 1.5 million have already received the second dose of vaccine. No abnormal findings have been reported so far, and the State Disease Control and Prevention Center (CDC) will soon begin publishing orderly reports on known side effects.

In Israel, we have so far vaccinated about 100,000 children in the first dose, Which are about 7.5 percent Of those eligible for vaccination in this age group. It is estimated that many parents are sitting on the fence waiting to see if any abnormalities are discovered in the vaccination campaign in the United States. It is important to remember that it takes close to a month to reach maximum protection of two vaccine doses, during which time children may be exposed to the virus and become infected. Therefore, the Ministry of Health invests considerable effort in information in order to encourage parents to get vaccinated. Meanwhile, the ministry’s epidemic treatment team (ZTM) delaying The recommendation to vaccinate recovering children, probably in anticipation of more information on the level of protection of recovering from the corona virus.

In the pharmaceutical arena, GSK, which produces antibodies against corona as a treatment to prevent deterioration in patients’ condition, Reported this week That according to its findings – which have not been published so far in any scientific journal – its treatment has been tested and found to be effective against all known variants of the virus. If this is true, the condition of this treatment is very different from that of the Corona patients’ drugs developed by Regeneron and Eli Lilly, who reported Already last week about a possible impairment in the effectiveness of treatments due to the many mutations in the protein against which it is directed. The real test of all companies will of course be against the results in the field.

Meanwhile, the Astra-Zenika company Received approval Emergency treatment for corona developed for immunosuppressants. This is also an antibody-based treatment. According to them, the treatment is 77 percent effective in preventing symptomatic disease, but like the other drugs and treatments, it is not yet known whether it will also be effective against the new variant.

And finally, Israeli research Another Clalit HMO shows the impulse cream (the third dose) of the vaccine given in Israel saved the lives of many. Data collected from more than 800,000 insured persons showed that the mortality rate from coronary vaccines in booster doses was 90 percent lower than those vaccinated in just two doses. The study was published in the New England Journal of Medicine.