Russia: A 19 year old soldier was sent for a psychiatric examination after sewing his own lips 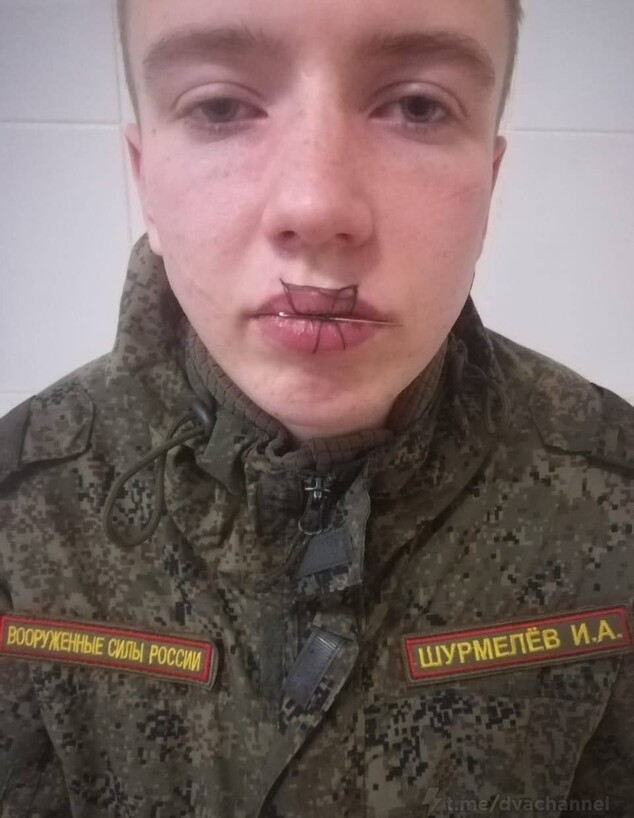 The disturbing incident was revealed after one of the officers approached the soldier and demanded that he take off his face mask. The findings of the investigation of the case revealed that the soldier allegedly did it to himself after a fight with his partner on the phone – although his mother believes that the real reason is completely different

A young soldier in the Russian army was sent for examination by mental health experts, after it became clear how he injured himself following a personal crisis. 19-year-old Ivan Shurmalev was only in the military for a few months before being sent for a psychiatric examination because he had stitched his lips so he could not speak. Pictures of the soldier have since gone online and shocked the surfers.

In the disturbing pictures you can see how the young soldier stitched his lips with two coarse stitches. The findings of the incident investigation revealed that his disturbed prank was revealed after an officer approached him while wearing a mask and when Shurmalev did not answer him, demanded that he expose his face. The stitches have since been removed at the clinic of his training base, located in the Chelyabinsk region.

Sources involved in the details of the incident said that it was revealed last Wednesday. The soldier said during his interrogation that what led him to sew his lips was a conversation with his partner, during which the two quarreled. According to Shurmalev, his partner was angry with him after it flattered a bunch of women they encountered while dating. He claimed he ended the conversation depressed and wanted to punish himself.

The soldier’s mother said since she had no idea there was a crisis in his relationship with his partner. But she noted that she thought it had nothing to do with his relationship and that it all happened because her son had become a victim of bullying by other soldiers at the base. His girlfriend has since spoken to local reporters and confirmed that Ivan has confessed to her that he suffers greatly from his military service.

His partner added: “I have no problem in principle with him flattering other women. I just specifically did not know them at all and was very hurt by him. I told him this calmly and I ended the conversation. He wrote to me later that he was sorry for his actions and apologized, but it was “It’s too early. I told him I did not want to talk and he thought I wanted to say goodbye to him.” The soldier has since been released from hospital and will soon be tried for his actions.