The technology that enables better management of multiple sclerosis 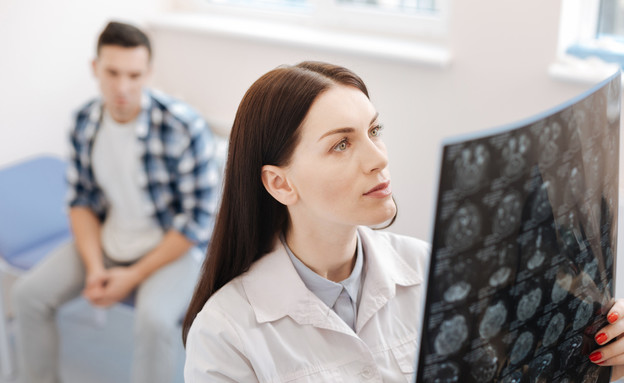 MS is a chronic, autoimmune disease that causes inflammatory damage to the central nervous system, brain and spinal cord. MS is usually characterized by seizures and remissions, which are manifested in a wide range of neurological symptoms in the body depending on the area in the central nervous system where the injury occurred, such as impaired sensation, vision, motor or cognitive functions and more. As the years go by, the neurological damage accumulates and impairs the day-to-day functioning of the patients.Monitoring the progression of the disease is a very important part of the management of the disease, especially in recent years, when new and advanced drugs have appeared that have shown good results in delaying the progression of the disease. Along with the neurological examination, once a year patients are usually also required for an MRI examination, the purpose of which is to present the status of the lesions created in the brain, their number and size. Another measure that appears on MRI is a decrease in brain volume, known as ‘atrophy’.

MRI results do not always agree with the patient’s report in the doctor’s room. “More than once patients come to me who report a change in the general condition, a feeling of aggravation, for example a patient who indicates that he notices that he can no longer concentrate at work, that he takes hours off. “He is getting tired. Maybe he notices in the housework that things are falling out of his hands. These things are supposed to light a red light, but the MRI scan shows that the patient is stable,” says Dr. Paniuta Petro, a senior neurologist at the Hadassah Center, Hadassah Medical Center. That there are actually changes in the condition of the lesions, small or subtle changes that our eye cannot detect. It could be a progressive progressive decrease or small seizures that are not clearly reflected in the imaging. “Year after year, the test indicates that the patient’s condition is stable, but if we wait five years, we will suddenly see the difference.”

In order to overcome the limitation of the human eye in detecting these early subtle changes in MRI, a new technology called IcoBrainMS developed by Icometrix has recently been implemented in various hospitals in the country. The system connects to the MRI scanners and the PACS system, where scans and tests of the patients are concentrated and using artificial intelligence decodes the situation according to the various indices and compared to previous scans. “These techniques allow us to detect those small changes in the condition of the lesions and a decrease in brain volume, compared to the previous test, as well as provide a numerical measure of brain volume compared to the normal condition in a healthy population. “Progressive, not only in terms of the patient’s level of functioning but also in terms of cognitive changes,” explains Dr. Petro.

Influence the future of patients

The more detailed and accurate the information obtained about the condition of the disease and the degree of injury, the better the decision-making process for physicians. “The data from the scans can give us an indication of whether treatment should be changed. For example, the newer drugs for the treatment of multiple sclerosis have been tested in terms of their effect on cognitive disorders and cerebral atrophy, so if a patient does not show seizures but some difficulty and scans indicate atrophy “We may choose to treat him with one of these drugs. New lesions can indicate the ineffectiveness of the existing treatment, and then we will examine whether another treatment should be tried.”

One common way to assess disease activity is through the NEDA (No Evidence of Disease activity) index, which includes several criteria to determine whether the disease is active or not – whether the patient experiences new seizures, whether there is progression in disability (testing done through another index, EDSS scale , Which quantifies the level of impairment of the patient’s mobility) and whether there are new or active lesions in the MRI. “Our goal is for the patient to be completely stable. If once it was enough to see that there were no seizures or changes in EDSS or that MRI was not seen as a change in the number of lesions, today we know it is not enough, and we have better tools for monitoring patients.”

The study in the field of multiple sclerosis includes many studies that have shown that there is great significance to the treatment given in the early stages of the disease on the continuation of life with the disease, says Dr. Petro. Of the disease compared to other patients who started less effective treatments. In these works they found that those who received the more effective treatment were in a better condition in the years that followed, i.e. the future of the patient depends very much on his condition and the treatments he receives in the first years of the disease. “If I can detect in a patient at an early age, a decrease in brain volume or any other change and choose one of the advanced treatments for him, I am actually affecting not only his health today but the coming years.”

“Until today, we lacked better biomarkers to monitor patients,” concludes Dr. Petro. “Today, we have new technologies that provide us with better biomarkers, so that we can better respond to MS patients.”

* It should be emphasized that the choice of possible treatment is for the decision of the therapist who registers the prescription in consultation with the patient. The information is valid as of December 2021. For more information, please contact the attending physician.