The downside of pretzels 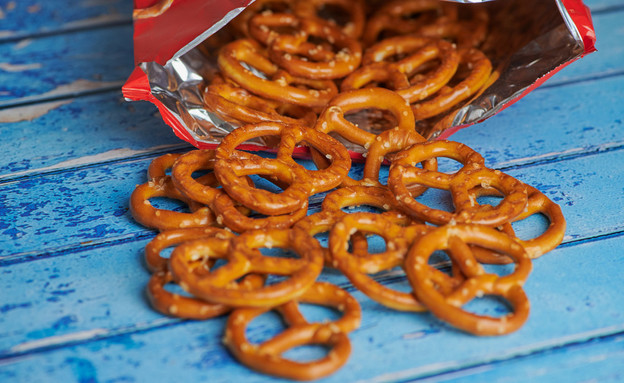 Everyone loves a pretzel but not everyone eats it the same way. Some will eat it directly from the bag, others will have to dip it in cheese and some will even prefer to combine with chocolate spread or peanut spread. But it turns out that there is one way that is the best and healthiest to eat pretzels.

Pretzel is considered to be one of the least harmful of the salty snacks, mainly due to the fact that it is not fried. Many salty snacks are fried and therefore also saturated with oil, which also adds quite a bit to their caloric value. If you ask dietitians, the healthiest recommendation is of course to avoid salty snacks and replace them with healthier snacks, such as vegetables and fruits. But pretzels also have a downside that many forget. That is why we are here to remind you and warn you.

According to data from the Ministry of Health, 100 grams of pretzels contain between 770 and 1200 mg of sodium – a particularly significant amount for such a small snack. In other salty snacks, the amount of sodium is usually below 700 and this is also considered a lot. 100 grams of pretzel stands for no less than 400. In addition, pretzels have very little dietary fiber, so it will not satisfy you in the long run. Yours gets a significant amount of sodium, which can harm the body.

Excessive sodium (salt) intake has been linked to a variety of diseases, including hypertension, which can be fatal and increase the risk of cardiovascular disease, stroke, heart attack, kidney failure and more. Most Israelis consume more sodium than they should (the prevailing recommendation is about 1,500 mg of sodium per day) and this can have significant consequences. This is one of the reasons why the nutrition label on food products indicates high sodium, high fat and high sugar. Excessive consumption Of all three can lead to various diseases that significantly affect the quality of life.

Is there a healthy way to eat pretzels?

As mentioned, the healthiest way to snack – is to choose healthy snacks, like dipping vegetables in white cheese, or eating a banana or apple with some peanut butter and there are plenty of other healthy snacks possible. But if it’s hard for you to say goodbye to a pretzel, there’s a healthier way to consume it. First, you should not eat directly from the bag and prepare a small dish in advance, a handful of pretzels will suffice for you. Second, you should add white cheese or cottage cheese, and you can also add some vegetables on the side like gamba, cherry tomatoes and cucumber – which will help the snack to be more satisfying (and also more nutritious, as they contain protein). And when you buy a pretzel at the supermarket – make a comparison between different types of pretzels and choose the type that contains as little sodium as possible.