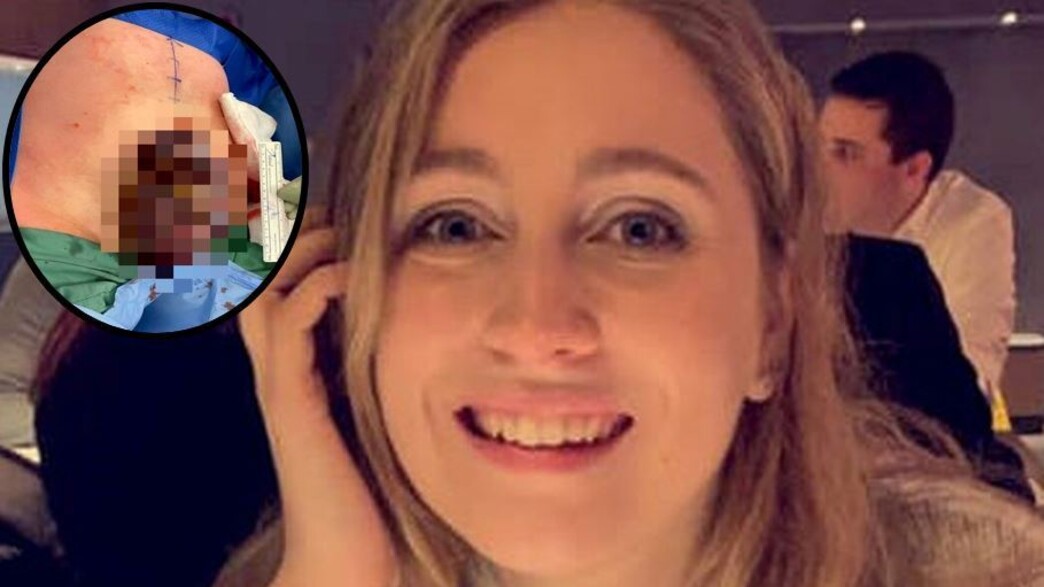 A young British woman who moved to Australia complained for months to doctors who criticized her for having symptoms of urinary tract infection. After no treatment helped, she was rushed to the hospital – where surgeons were shocked to find that she had a 20 cm ovarian tumor.

A woman was rushed to hospital with a tumor the size of a melon in her ovaries after doctors told her she just needed to “lose weight.” The woman, a Briton named Hannah Cotton, a nurse in a living clinic by profession, is undergoing life-saving chemotherapy in Australia without her family, as her relatives cannot reach the closed country due to corona restrictions.

Hannah, 24, moved to Melbourne in 2019 to work at a veterinary clinic. She visited the doctor after suffering from bloating and recurrent urinary tract infections, but was told it was probably related to stress and that she needed to lose weight.

But the events took a dramatic turn when she collapsed in excruciating pain while riding horses in October last year. She was later diagnosed with ovarian cancer after being taken to Mercy Women’s Hospital in Melbourne, where surgeons removed a 20cm tumor from her ovaries.

“I was so angry because for more than two years I suffered from recurrent urinary tract infections,” Cotton said angrily. “They pushed me with so many antibiotics to try to cure it.”

“For more than a year I went to different doctors in an attempt to find a family doctor who would listen when I told them my period was irregular and something was wrong,” she describes how the default rolled. “The response from everyone was ‘You’re stressed, you’re fine, give it time, lose weight.’

“I lived with menstrual cramps, chronic fatigue, urinary tract-like symptoms and bloating. I knew something was wrong but no doctor seemed worried,” Cotton added.

While Hannah was planning a new life in Australia, she wanted to return home to the UK every year to visit her family. “The last time I saw my parents and brother was when I said goodbye to them at the airport to travel to Australia almost three years ago, so it was very difficult for all of us.”

Although she underwent emergency surgery to remove the tumor, Hannah’s chances of recovery are high. “Due to the size of the tumor and the fact that it ruptured I am currently undergoing chemotherapy,” she noted. “But I’m lucky that my prognosis (assessment of chances of recovery) is good because many in my situation are unable to get out of it.”

She hopes her story will help other women express their concerns, even if their GP thinks otherwise. “I have received fantastic support from my friends here in Australia, including my friend Kiel, as well as from my many friends at home who have all been amazing. It’s incredibly difficult for them because all they want to do is hop on a plane to be with me but they are not allowed to.”

Her friends rallied to help her raise funds for daily costs, as her health insurance only covers the care. One of its members even organized a fundraiser and in Australia, members set up a Gofundme page that has already raised more than $ 3,000 from supporters.

“Everyone was amazing in their support of me and for that I am so grateful,” she concluded. “Once I’m healthy enough, I’ll fly home to what will undoubtedly be a very exciting encounter.”