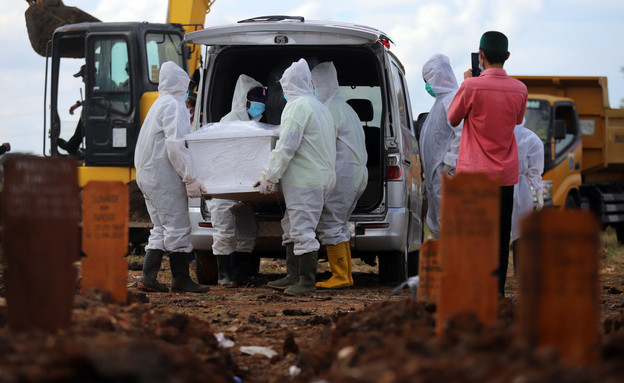 Indonesia is currently facing another severe corona wave, apparently due to a Delta strain, according to the country’s authorities. Since May, the number of corona cases in Indonesia has been on the rise – and yesterday (Monday) it reached a record number of 29,745 new infections per day.

It is now reported that in the last weekend alone, 63 patients died at a hospital in the city of Jaba due to a lack of oxygen. The hospital said in a statement to local media that they had tried to get more oxygen balloons before the incident, but the amount of new corona patients who arrived at the hospital last Friday quickly led them to a state of oxygen deprivation which also surprised the medical staff at the site. A hospital spokesman did not say if all 60 people who died from oxygen deficiency were corona patients, the hypothesis is that some or most of them were infected with the virus.

Jaba hospitals are overcrowded these days and the local health system is on the verge of collapse, apparently as a result of the spread of the Delta strain within the country’s borders. The Indonesian government recently noted that the number of funerals held daily due to corona disease has increased significantly – 10 times the number of funerals that took place in early May. According to reports, 392 people died of coronary heart disease on Saturday alone. Authorities say the increase in numbers is likely due to recent celebrations in the country and due to the complacency of the leadership in the face of the spread of the Delta strain. “This variant hurts everyone – not just children but also adults,” said Buddy Gonadi Sadikin, the Indonesian health minister. “If we compare that to the previous wave, the number of validated patients increased significantly faster in both adults and children.”

Apparently the immunization rate in Indonesia has also affected the significant wave that is taking place these days. Although the vaccination campaign began in January, so far only about 5 percent of the population is vaccinated with two doses, according to data from Johns Hopkins University. It should be noted that more than 350 doctors and medical staff were infected with corona despite being vaccinated with the Chinese vaccine from the Sinovak company. This is not the first proof that the Chinese vaccine may be significantly less effective compared to other vaccines. Various countries that have purchased the Chinese vaccine have recently reported new outbreaks of corona, including Chile and the Seychelles.

The Indonesian government recently declared a state of emergency in the capital Jakarta. In addition, a field hospital will be built at the stadium in the capital, which will provide 5,000 extra beds for Corona patients.

The corona plague is an event that continues to evolve and catch up. The current report is as of Tuesday (06.07.2021) and more may change. We strive to bring you the latest reports, but it is important to be updated daily in light of the many changes.