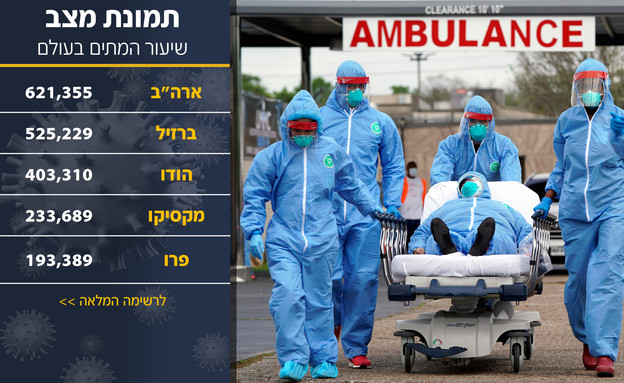 541 days have passed since the first (official) death of the corona virus, a 61-year-old Chinese citizen from the city of Wuhan, died on January 20, 2020. We are now approaching another tragic record in the global fight against the corona virus – officially 3.9 million. Worldwide, the death toll is alarming, with the daily average approaching 7,400 deaths each day. Currently the situation is still catastrophic in Brazil, Mexico, India and Russia. However, the United States also recorded a sad record of 621,300 deaths, almost a third of them during the time of the new president, Joe Biden. The situation in Israel is still considered excellent in relation to the countries of the world, but Ministry of Health officials are monitoring the increase in infected data.

According to Think Global Health magazine, the corona virus has become one of the top four causes of death in the world, with 1 in 20 deaths worldwide since the outbreak in 2020. It is also claimed that in France, the US, Iran and Spain, the corona The Delta strain, which has also hit the state of Israel hard, is responsible for infections in no less than a hundred countries, according to the World Health Organization. It should be noted, however, that thanks to the vaccine the symptoms are milder and severe cases become rare for those vaccinated.

According to the latest data, 184.9 million cases of corona have been documented worldwide. Of these, 34.5 million are infected in the US, 30.6 million in India and Brazil 18.7 million people have been infected in Corona. Experts around the world attribute the high death toll to mismanagement by governments. Corona deniers, who have risen in human life.Of course in countries where the health care system is not advanced, morbidity and mortality are higher.

As mentioned, the USA leads in the number of deaths with over 600,000 followed by Brazil with 525,229 deaths. India is in the third place in the table with 403,310 deaths. In Micronesia and Samoa no deaths were recorded at all and also the number of infected stands at one single patient in each of them, and both have already recovered from the virus.

The 10 countries with the highest death toll

In Israel, the number of deaths from corona is at a moderate level in relation to the world, even when the number of deaths in relation to the country is measured. According to the Ministry of Health, the death toll in the country is 6,429. An encouraging statistic that can be comforted is that the graph of those who died of the virus is declining. This is true for Israel as well as for the world. In January and February there was a record number of daily deaths with an average of about 17,000 deaths. In April this year the figure dropped to an average of 15,000 deaths per day while in June 2021 the daily average dropped to 7,000 and the graph continues to record a decline. A total of 169,316,371 people around the world have recovered from the virus.

The corona plague is an event that continues to evolve and catch up. The current report is as of Tuesday (06.07.2021) and more may change. We strive to bring you the latest reports, but it is important to be updated daily in light of the many changes.