Israelis undergoing plastic surgery from non-certified doctors in the PA 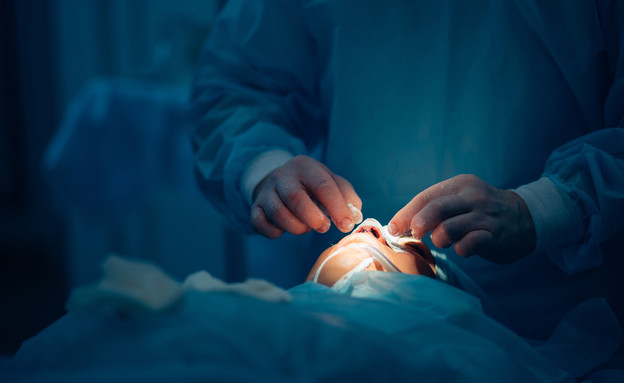 The hospital said she was “in a state of shock, very low blood pressure, dizziness and pallor”. In addition, “a test performed on the patient revealed blue marks all over her body that indicated extensive hemorrhage. A further in-depth examination revealed a hemoglobin 5 level that was very low and even life-threatening.”

This incident revealed a life-threatening phenomenon both health and security. It is estimated that every year there are hundreds of Israelis who enter the Palestinian Authority to perform plastic surgery because of the low price. The problem is that the low price can cost them their lives. These are doctors who are not approved by the Ministry of Health and in quite a few cases it seems that these are doctors who have not specialized in plastic surgery and even those who do not have a certification to practice medicine.

According to the Israeli Association of Plastic and Aesthetic Surgery in the Medical Association, every year about 60 women and men are hospitalized in public hospitals in the country due to complications caused as a result of plastic surgery in places that are not allowed to perform and are not supervised. As mentioned, the result is life threatening and in quite a few cases there may also be health damage and lifelong scarring.

In the case of the young woman who arrived at Shamir-Assaf Harofeh Hospital, her life was saved after she was quickly transferred to the Department of Plastic Surgery, headed by Prof. Lior Heller, where she “received intensive treatment to stabilize her condition, which included three doses of blood and fluids.

The fact that she underwent surgery in the PA was discovered when the young woman’s family was asked to bring her surgery report so that the medical staff knew how to treat her. However, to the surprise of the doctors, the family refused to submit such a report. The doctors were not surprised to find out on the plain document, based on the signature on it, that the doctor who performed the surgery and introduced himself as a specialist in plastic surgery, did not undergo any specialization in this field at all.

Prof. Lior Heller, Director of the Department of Plastic Surgery at Shamir Assaf The doctor explained: “This case represents a group of patients undergoing surgery and operations related to plastic surgery in unqualified places. And repairing these damages will result in lifelong physical and mental scars for the patients. ” Dr. Meir Cohen, chairman of the Israeli Association of Plastic and Aesthetic Surgery at the Medical Association, said that he “wishes the patient a speedy recovery and congratulates the plastic surgery team at Shamir, headed by Prof. Lior Heller, on saving her life. This is a painful and unfortunate case.”

The problem is that this painful and unfortunate case is not the only one. It is no secret that many Israelis choose to perform plastic surgery in Israel and abroad in places that can be defined as dubious, at best, due to the low costs.

“In general, Palestinian doctors are not recognized and certainly not supervised by the Ministry of Health,” a source in the ministry told us. “A doctor who is not an Israeli citizen or resident may apply for a limited permit, but only if a recognized public medical institution invites the doctor to work and perform operations within the same institution. Palestinian doctors do not work in recognized institutions in Israel and therefore are not eligible to submit such a permit. Approved by the Ministry (Health) and not supervised. “

He honestly admitted that he does not know the number of Israelis who choose to undergo plastic surgery in the Palestinian Authority. However, he estimated them at “several hundred each year. Some of them are Israeli Arabs or Druze, but they also have a very large share of the Jewish public.”

Non-qualified physicians and equipment that does not meet standards

So who are those Palestinian doctors who perform plastic surgery? “Some of them did pass the relevant internship,” said a source familiar with the details in a conversation with Mako. However, he wanted to emphasize that “the fact that they have a specialization in the field is not everything. The patients who choose to go to the same doctors do not know how successful he really was in his studies and specialization. They also do not know where he studied and passed the specialization.” “The level of medicine in the PA’s is not high, certainly in the field of plastics.”

But, believe it or not, this is still considered the best case scenario. Because, according to officials in the Ministry of Health and doctors who have been exposed to the phenomenon, a large part of those who perform plastic surgery in the PA have not undergone any specialization in plastic surgery. “These are professionals who have specialized in other fields; ophthalmology, gynecology and more, who decided to go into the field of plastic surgery privately. Palestinians see the sharp increase in the number of these surgeries in Israel and around the world, they understand the economic potential.” Really high. “

It should be noted that not only is the physician’s professional level unclear, the level of hygiene of the equipment and cleanliness does not meet Western standards and significantly endangers patients. Dr. Cohen, chairman of the Israeli Association of Plastic and Aesthetic Surgery at the Medical Association, sends a stern warning to the public to pay attention to “who is the doctor who treats him.” Emphasizes that “remember that every surgery also has risks and a recovery period, so it is recommended before the surgery to ask the doctor what the complications are related to the specific area of ​​the surgery and to update the doctor on all background diseases, medical history and hear his recommendations.”

He wanted to emphasize that “it is essential that the public understands that a plastic surgery specialist is a doctor who, after receiving his license to practice general medicine in Israel, chose to continue his training and specialize in the medical industry called plastic and aesthetic surgery. A doctor who specializes in this field. “

In addition, Dr. Cohen explains that in order for a doctor to become a specialist in plastic surgery, he must study and undergo an internship for at least 13 years. .

As stated, data from the Israeli Association of Plastic and Aesthetic Surgery at the Medical Association show that every year about 60 women and men are hospitalized in public hospitals in the country due to complications of aesthetic surgeries performed outside the Israeli health system. These complications can be fatal, necrosis, severe infection, accumulation of blood and fluid that requires drainage in the operating room, opening of scars and surgical wound, difficult-to-heal wounds and deformities created following surgery or unprofessional surgery. And sometimes severe scars for life.

The union’s data show that in the past year, about 6,000 liposuction procedures have been successfully performed in Israel under local or general anesthesia by Israeli plastic surgeons who specialize in plastic and aesthetic surgery at the Medical Association. How many surgeries were performed outside the Israeli health system? It is estimated that there are many thousands more, hundreds of them in the PA’s territories.

It should be noted that today, the condition of the patient who survived the week has stabilized, and she is expected to be released to her home in the coming days for further follow-up and treatment in the community. In Israel, however, there are many hundreds of people who carry scars for life.

A. is also a young woman in her 20s from a northern settlement, who underwent plastic surgery in the Palestinian Authority. “I knew what the risk was but the price bought me, I mean,” she says. “I also came to a meeting with the doctor who overall seemed very nice and serious to me.

She claims “two of my girlfriends had surgery there and everything was fine, so in general it was clear to me that I was going for it”. Only she fell in the statistics and in her case the surgery really didn’t end “okay”. According to her, the day after her release and return to Israel from the West Bank, “I started having strong pains and bleeding. I tried to contact the doctor but I couldn’t and at every minute my suffering became insane. The pain became more severe and the bleeding from the stitches. There were also dizziness and I became apathetic, “she described.

Luckily, her mother took her to the intensive care unit at the hospital, where they saved her life after a diagnosis that included low hemoglobin, low blood pressure and a lack of blood and fluids. The doctors in Israel simply saved A.’s life.

Alongside the medical question there is of course also the security aspect. Israelis are prohibited from entering Area A, and entry is also not recommended for Area B, which is under Israeli and Palestinian civilian security control. However, sources we spoke to in the IDF and the police admit that there is no real enforcement of the ban, especially not against Israeli Arabs but also not against Jews.

In an investigation with officials in the SJ district, the police stated that the issue of plastic surgery of Israelis in the Palestinian Authority is familiar to them, but not the magnitude of the phenomenon. A way to enforce a ban of this kind, because it is a regulatory office.

A police officer from the SJ district with whom we spoke also did not know how to outline the extent of the phenomenon, but said that “many Israelis break the law to conduct trade in PA areas. Also medicine? Could it be. I know that Palestinian dentists are very much in demand by Israelis. “Because of the price. Probably not just them. But it can also be shopping, garage care and all sorts of things like that. It really does not matter why an Israeli enters there, it is life threatening and as a police we ask that they not do it.”

To be honest, the fact that Israelis are risking their lives for a few pennies is not a new story. The field of plastic medicine shows that the phenomenon is only getting worse and it seems that it has even gotten out of control. But even if we put the security issue aside, every Israeli should ask himself, certainly in the medical context, whether saving a few pennies is worth the danger to life.