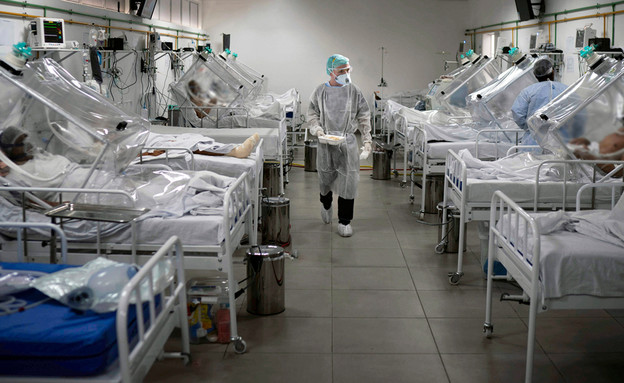 The global vaccination campaign against the corona virus began nearly eight months ago, with the aim of vaccinating the entire world population and suppressing the plague. So far Given More than 3.7 billion vaccine doses are worldwide, and the rate now stands at about 31 million doses a day, about a third of them in China. World population counter About 7.9 billion people, about a third of them children, and most vaccines require two doses, so a little more than 5 billion remain to be vaccinated.

Had the vaccine been given horizontally worldwide, about a third of the adult population would have received two doses of the vaccine. In practice the division was not equal at all, so some countries vaccinated most of their inhabitants and others did not vaccinate almost at all. If we add to the picture the relatively low effectiveness of Chinese vaccines, which are about half of the vaccines distributed worldwide, we get a complex picture of a world fighting a plague with very limited success, even if one already sees the light at the end of the tunnel.

Gaps in dealing with the Delta variant

A few months ago, a new variant of the virus emerged from India, which has accumulated a series of mutations that allow it to infect far more people than all the variants that preceded it. The variant, dubbed Delta, manages to erode the effectiveness of the vaccine in preventing infection and we come across more and more vaccinated people who have been infected. Although the vaccine is still effective in preventing serious illness, a small percentage of those infected still develop symptoms that require hospitalization, and a minority even die from the disease. The statistics do their thing, and when the number of infections is high, even low percentages are manifested.

Countries that have succeeded in obtaining a large number of Western vaccines (Pfizer, Moderna, Astra.Zenica and Johnson & Johnson) and vaccinated a significant proportion of their population, are now encountering vaccines thanks to the outbreak of variant Delta which is characterized by relatively severe or dead patients. Still, as time goes on the number of patients increases. This is what is now being seen in the UK and the United States and is beginning to be seen in Israel as well.

This situation is not simple, but it is nothing compared to what happens in countries that are dealing with the Delta variant without the protection of the vaccine. A tragic example She stands out Indonesia, which now ranks high in the global morbidity table with more than 30,000 verified infections a day and more than a thousand deaths every day. For comparison, the United States has a similar number of verified people, but its mortality rate is about one.fifth that of Indonesia, and the vast majority Of the dead (99 percent) are not vaccinated. In the UK, more than 40,000 people are diagnosed daily, but the daily death toll does not exceed a hundred.

There are many more examples of countries that have not vaccinated enough of their residents or have opted, sometimes with no choice, for less effective vaccines and are now dealing with the Delta variant without adequate protection. there is A clear statistical relationship Between a low immunization rate and a high mortality rate. And if you still need further proof of the importance of the vaccine, see this graph:

The situation in the UK, then, looks seemingly good. At present it has almost no restrictions on the public, and the morbidity is indeed rising But mortality is still quite low compared to previous eruption waves. The British decided Bet on the whole pot And try to live next to the virus and see what happens. This is a kind of huge experiment in humans, done after a similar move last spring failed miserably and cost tens of thousands of lives – but then there were no vaccines yet.

At present it seems that the number of sick and dead patients in the UK does not threaten the functioning of the health system in the country, but the increase in it is worrying. The main concern is that the virus is still far from realizing its potential for infection, and so the British may reach a point where it will no longer be possible to control it without imposing severe restrictions on the public that everyone is trying to avoid. We wish them success and try to maintain a safe distance in the morbidity rate.

NEW: probably the most important Covid chart I’ve made

As Delta goes global, it’s a tale of two pandemics, as the heavily.vaccinated Western world talks of reopening while deaths across Africa and Asia soar to record highs

Impulse for an impulse dose

In Israel, the situation is confusing. Unofficial quotes that have been leaked to the media in recent days and the publication of data by the Ministry of Health tonight (22.7) paint a worrying picture of a relatively high infection rate among vaccinated January. This may indicate an erosion in the effectiveness of the vaccine in preventing infection, although the rate of protection it gives from a serious illness remains high, which is the most important thing. Decreased benefit may be due to natural attenuation of the immune memory or due to characteristics of the virus that manages to evade the immune response induced by the vaccine. However, these results may also have all sorts of biases such as: non.uniform test rate, non.uniform exposure rate among vaccinated, higher sensitivity of the first vaccinated (elderly and people with background diseases) and more. We are in a kind of twilight period in which the information is not yet complete. In the coming weeks the picture will become clearer.

From time to time the possibility arises to give a third dose (booster dose) of the vaccine in order to renew the immune protection, at least for those who are in risk groups. Currently, the US Food and Drug Administration (FDA) has not approved this move, and the Israeli Ministry of Health has also avoided it, except for a fairly small group of vaccine.suppressed people. It is also not clear if such an impulse dose will help, but the option is on the table.

Pfizer Company Announced Which intends to begin an updated vaccine test adapted to protect against the Delta and Delta Plus variants as early as next month, but no findings are expected before November. In the United States, as mentioned, there is no rush to approve a vaccine in a third dose, and since the extensive vaccination campaign began there after Israel, in most places there are still almost no signs of a decline in the effectiveness of the vaccine – primary evidence for such a trend is beginning to emerge AndSan Francisco, Where several cases of “breach of immunity” were discovered. At a festival held in the Netherlands, which was attended by 20,000 people who were all vaccinated or tested shortly before the event and left for Corona (a kind of “green mark”), Still infected with corona Close to a thousand people. It is not known how many would have been infected without the vaccine.

A study published this week, based on data from the UK, estimated the effectiveness of two vaccines against the Delta variant at about 88 percent. It is difficult to determine how relevant these data are to Israel, as the British have implemented a different vaccination policy, which includes a gap of up to three months between the first and second dose. Moreover, they may have started vaccinating a little before us, but the significant use of Pfizer vaccines began there only at the height of winter. We seem to be in a time of uncertainty again. Thanks to the vaccines we are in a much better condition than we were a year ago, but we will have to wait a few more weeks for the picture to clear up. And that too only on the assumption that a new variant will not emerge that will completely change the rules.