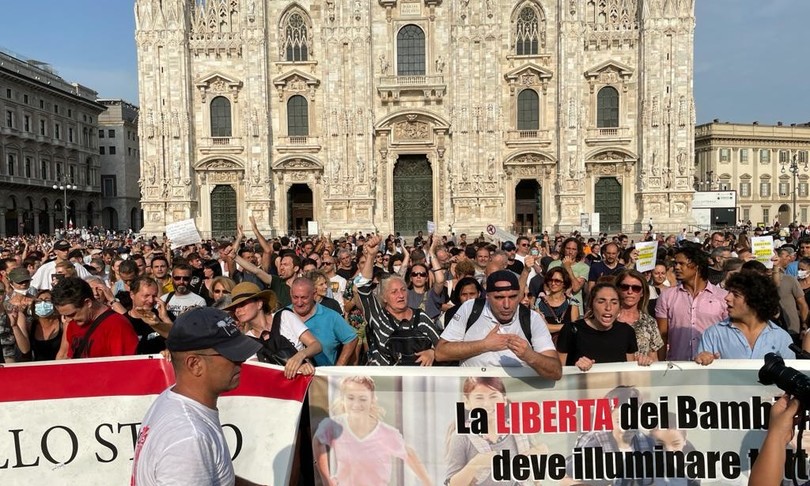 ` – Different thousands of people in the square this afternoon in about 80 Italian cities to demonstrate against the green pass and what they define “health dictatorship”– Protests not only in large cities – in Rome in Piazza del Popolo, Milan in Piazza Fontana, Genoa in Piazza de Ferrari, Turin in Piazza Castello, in Naples in Piazza Dante – and in many provincial capitals, but also in several smaller centers such as Nizza Monferrato, Saluzzo, Montebelluna, Foligno. “Freedom, freedom” the slogan shouted everywhere.

In Rome, the demonstrators, most of them without masks, chanted “No to the green pass” and “freedom”. Some waved tricolor flags. One of the signs on display reads ‘No to the green pass, yes home care’. “We participate in these demonstrations as citizens, without our symbols. I hope they are popular protests and that they are not exploited,” said Luca Marsella, Casapound municipal councilor in Rome. In Milan at least 3,000 people shouting “Freedom, freedom” and “No Green Pass” they walked the streets around Piazza del Duomo aimlessly. Also on display was a banner “Big Pharma out of the state. No to multinationals”, chants of “You will pay it all, you will pay dearly”.

“No to vaccine segregation”

In Turin, where a crowded demonstration had already been held on Friday, a procession with the banner “United for freedom of choice against all discrimination”. In Macerata a banner “Green is the new black. No to vaccine segregation”. In Bari the procession was formed in Piazza Ferrarese, after a word of mouth that in recent days took place on social media and in chats, then it headed towards Piazza della Libertà, where the Prefecture is based. Banners are displayed against the government and anticovid regulations. Slogans such as “Freedom”, “No green pass” and “Hands off the children” are shouted. The event takes place simultaneously in other cities of Puglia, starting from Lecce.

Over a thousand people in the square in Genoa: young people, families, the elderly have invaded the De Ferrari quadrilateral with signs and slogans. Someone wore the yellow Star of David on their chest that read “not vaccinated”. Among the first to speak on the megaphone, Leonardo Sinigaglia, 22 year old Genoese, history student: “I am not the spokesperson of any movement. It is something that is mounted on social networks, evidently representing the thoughts of many people who are in the square today “. Sinigaglia, who is not vaccinated and has chosen not to do so because “the vaccination campaign is yet another way of the state to wash its conscience: they continue to attribute the blame for the health and social crisis to the choices of individuals” also a sign with “boycott green pass” written in black on the Italian flag with the symbol of the Nazi SS.

Two events organized in Florence. Several hundred people who have made an appointment, with a tam tam via social media, in Piazza della Signoria. Men and women, mostly over 50, all, or almost all, without a mask, have implemented an unauthorized defense. No respect for the spacing. The few tourists present look astonished. The other event was the one organized by the ‘R2020’ network in the public gardens of the Fortezza da Basso. At the garrison, authorized by the police, there were about 200 people, also in this case without a mask, who gathered in the green area surrounding the Fortress, sitting in a circle on the ground. On a small stage set up at the top of the hill in the gardens, ‘speakers’ alternated to represent their point of view on the new measures and “give a voice to those who have no single.minded information”.