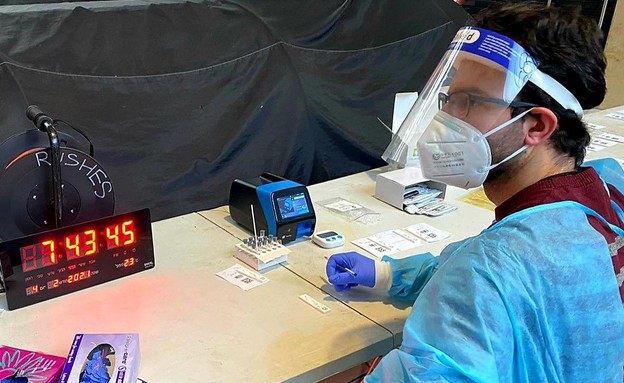 Until the fourth corona wave, the use of rapid corona testing as a tool for disease control was limited. We saw it mainly at the entrance to the “Green Islands” Eilat and the Dead Sea, and also at the entrance to events, although their application in this context was relatively minimal. Now, it seems that the rapid tests will come into wider use and the question is: what are the expectations from the tests and can they be realized?

There are several reasons why the quick tests come up for discussion again. The first is the recommendation of the cabinet of experts who advises the government, according to which these tests should be used as a substitute for isolation among children in schools. That is, when a child of primary school or kindergarten age is verified in an educational setting, it will be possible to perform rapid tests on those exposed to it every day for a week, as a substitute for isolation. Whoever is found negative, will continue to learn.

A second reason is that the speed tests are now part of the green mark. Today, people who are vaccinated and recover and those who presented a negative PCR test that is less than 72 hours old can enter complexes that require a green mark. From this week, even those who presented a negative fast test lasting less than 24 hours will be able to do so.

Another change is the launch of the home speed tests. To date, the Ministry of Health has hesitated whether to allow the marketing of speed tests purchased at pharmacies, out of a desire to get a complete picture of the number of verified patients in the country. However, it was decided that in light of the fact that these tests are in demand by consumers and because they are common in other countries, and can also be a significant tool in managing a routine alongside the epidemic, they are more marketable. However, they will not be considered an official inspection that allows entry into a restricted compound.

The characteristic of rapid tests is that they are quite good at detecting if a person really does not have a corona, meaning that he is negative. According to Ofir Klein, CEO of the BD Medical Equipment and Diagnostics Company in Israel, for those who are not ill – a false positive result is almost never obtained. For the event, 8.14 will receive an answer that they are not sick, and will enter.

For the protection of rapid testing it should be noted that the subjects it is mistaken for and does not identify as positive, are usually of lower viral load, and therefore may be less contagious relative to other positives. It should also be noted that a rapid test from 24 hours ago may give a more reliable result than a PCR test, which is more reliable at baseline, but was performed 72 hours ago and since then there has been another opportunity to be infected.

But, given these numbers, the quick check does not remove risk from the event or the individual attending it. It only reduces the numbers at the population level.

Klein: “The tests that reached the Israeli market are five or six tests out of dozens of tests that exist in the world. The Ministry of Health was selective and chose the best and most accurate of the global tests. “Performance has been found that, according to the journal, puts these tests in line with the PCR tests as a tool for controlling the epidemic.”

The demand for the rapid tests offered today at doctor’s offices and before, indicates the public’s interest. Sagi Yaniv, Marketing and Sales Manager at Sofia Israel of the Remipharm Group, which markets the Quidel test from Quiddle, the most common in the country today, notes that with the application of the “happy character”, which allows PCR tests to be replaced quickly, there is a 30% increase in demand for speed tests. Perform for a fee at a doctor’s company. Klein says that even before, where BD rapid tests can be performed, demand is high.

Dr. Nadav Davidovich, head of the School of Public Health at Ben.Gurion University, says: “I would differentiate between a test performed by an organized body such as a health fund or MDA, and funded by the state, and the test at home. The official test is a good tool to reduce The rate of infection, while keeping the economy and the education system open. ”
“As for home tests,” says Davidovich, “it is very problematic in terms of reliability and reporting. Some subjects will make a mistake in performing the test and there is also a fear of unreliable reporting. That’s why we refer to them as ‘Nice To Have.‘ –

If I’m going to an event right now where there are speed checks at the entrance, I can not really be calm.
“If you are both vaccinated and maintain social distance, then it adds another layer of protection. You should not look at it as 0 or 1.”

David Peppo, chairman of the Association of Private Pharmacists, estimates that the quick tests will be in pharmacies for private purchase by the end of the week or the beginning of next week, depending on the approval given by the Ministry of Health to importers. The price will be several tens of shekels.

“The tests are very simple to use,” says Pepo. “I see this as normalizing daily life in the shadow of the epidemic. Perhaps in the office where to this day those who come to the compound physically asked once every two weeks, will now ask for a quick check twice a week. Even if the test is a little less accurate, it is a different procedure.”

Even if people perform the test themselves?
“Is there an interest for a man to come with Corona to work? If he is such a deceiver he has all sorts of other ways to deceive.”

In Europe, rapid testing is an everyday reality

Europe has been betting for months on speed tests as a means of reducing the spread of the corona plague. These are not home tests, but fast antigen tests that give results within 15.30 minutes, which went on the market last September and are usually offered for free. They are run alongside the more accurate but slower PCR tests, and are a key part of Europe’s disease prevention strategy.

In Germany, for example, rapid tests are performed in shops, medical centers, commercial spaces, tents and wherever he has received approval to perform them by committing to follow the appropriate medical protocol. Employees, who are supposed to be skilled at taking samples using a pen, perform them and the results are obtained quickly via e.mail.

For those who have not been vaccinated, for example, any entry into a business, restaurant or museum in Berlin is required to present an up.to.date negative negative test (usually up to 24 hours). Thousands of places for speed checks have sprung up ad hoc on city streets and across Germany. For flight or tourism, however, PCR tests usually need to be introduced.

At the same time, in many European countries such as France, Germany and Austria, mass speed tests for students are organized in schools. Some children test themselves with markers under teacher supervision once or twice a week, some salivate for PCR tests, and by the start of the school year in the coming weeks the authorities have already made it clear that these tests will be part of the routine of the lower age groups, who have not yet been vaccinated.

In France, which has been at the forefront of rapid testing since the beginning of last winter, the new regulations passed over the weekend abolish the subsidy granted so far for these tests, and in September everyone who has to do them will be asked to pay at least 50 euros for them. The move is designed to encourage immunization.

In Germany, these tests are still provided free of charge to residents, and funded by the authorities. But in fact, their use is at the center of the authorities’ investigation, after widespread failures in their supervision were discovered – independent testing centers are allowed to report the number of subjects without any control, and many cases of “inflating” subjects have been discovered in order to obtain fraudulent funds. Each center receives between 12 and 16 euros for the test, which in many cases cost a euro or two.

Regarding home inspections, regulations in Europe vary from country to country. You can buy them at pharmacies or through the internet. In the UK, for example, any supermarket worker, police officer, transport worker and other “key roles” will need to check themselves daily for a quick check, in order to avoid isolation in case they are not vaccinated and are required for isolation. In Germany, some companies require employees to perform an independent inspection on a daily basis.

As for the question of the effectiveness of the rapid tests it is difficult to get an unequivocal answer. The common perception is that their sensitivity is lower, and that symptoms must be demonstrated in order to get a positive result. The European Agency for Disease Control ruled last month that they “can be an effective tool in combating coronary heart disease”, especially in the workplace. But the fact that they came into use in parallel with the increase in the number of vaccinated and the summer season makes it difficult to determine whether they constituted a significant “change of direction” in the fight against the corona plague.