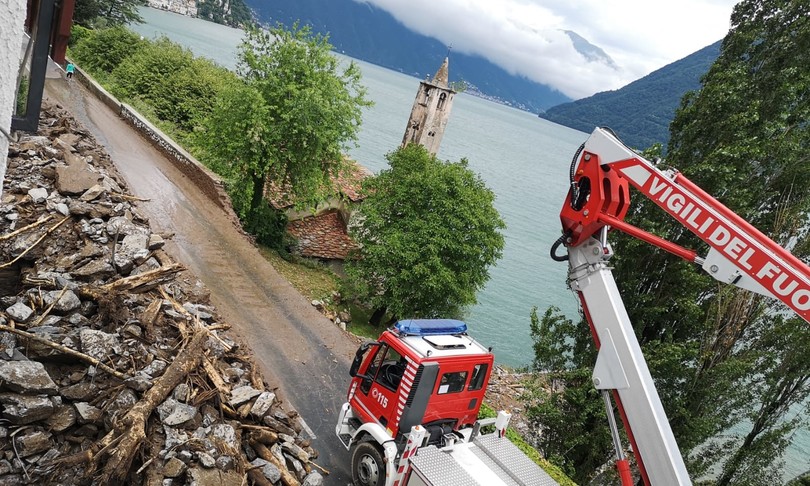 ` The old Statale Regina, the road built by the Romans that connects Como with the ends of its lake, collapsed four times in one morning due to the bad weather that hit the lake in the summer- The rains of the last few hours are causing great inconvenience in the Larian area-

The Queen’s traffic has been blocked, the streets are flooded with debris and mud and some countries have remained isolated- According to what was reported by the fire brigade to the `, hundreds of interventions had to be carried out, mainly located in the lakeside villages of Blevio, Lezzeno, Brienno, Laglio, Colonno and Argegno-

A condominium has been evacuated in Cernobbio- The brigade also rushed to secure an elderly person, not self-sufficient, in his home in Laglio- One was evacuated in Olgiate Comasco and Uggiate Trevano forty people- For many hours the rain has been beating incessantly-

Roberto Pozzi, mayor of Laglio, invites his fellow citizens to “stay home” in a Facebook message- “Tracimata Val Caradello- Flooded houses and people evacuated by the Fire Brigade- A torrent of water and mud which then flowed onto the SP 71 Regina, flooding it and causing the lake walls to collapse in the restaurants area- Franata Via delle Frazioni in Tana della Volpe, just redeveloped- Provincial blocked for landslides-Avoid getting moving, the whole Basso Lario is in emergency “is the message to the inhabitants of Laglio, a town made famous by George Clooney who owns the princely ‘Villa Oleandra’ on this shore-

In a previous post, the mayor gave an account of the fact that “the Caradello stream has transported downstream mud, debris, stones and rubble, two bridges knocked down and finished the mad rush crossing the provincial road at Villa Dell’Orto and dividing to the left towards Piazza Roma, breaking down walls on the lake and dragging cars and to the right carrying a great mass of trees and debris almost to the town hall “-

The largest vaccination hub in the province closed

As of 17 July 27, the largest vaccination hub in the province of Como, that of Villa Erba, was closed due to bad weather- The decision was made by mutual agreement between Asst Lariana, the Prefecture and the Municipality of Cernobbio-