Significant increase in cases of infection in Europe 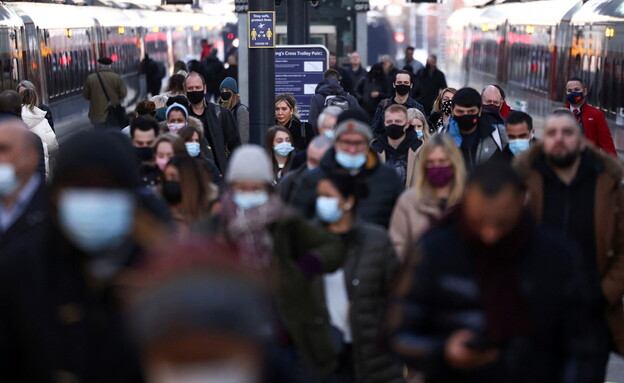 Is the fifth wave behind us or was the return to routine too early and too fast? In recent days and after a consistent decline in all corona indices, a number of European countries are reporting a trend reversal. The amount of morbidity is climbing in the UK, France, Germany and Austria. In Israel, too, the infection rate has remained very high since the beginning of the month and stands at 0.86%, the highest rate since February.Experts estimate that a combination of lifting restrictions and lowering immune defenses are the ones contributing to the change in numbers. At the same time, experts are monitoring the new strains and their rate of spread in an attempt to see if they could further aggravate the data. A sub-version of Omicron, BA.2, considered a strain with increased transferability, is now considered the most common strain in the UK.

Last week, the World Health Organization also introduced the Deltacron strain, a hybrid version that combines Delta and Omicron, and updated that it has begun to travel around Europe. According to the briefing, the new variety began to emerge slowly in France, Denmark and the Netherlands. “We have not seen any change in epidemiology, a change in severity, but there are many studies in progress,” she said.

Pls also see here where we talk about the possibility of recombinants of #SARSCoV2. This is to be expected, especially w intense circulation of #omicron & delta. @WHO TagVE is tracking & discussing.

The UK, which has lifted all restrictions, including the obligation to isolate verified nationals, last week reported an increase in all indices, especially among people aged 55 and over. According to The report Last official During the last 7 days the number of new cases increased by 46.4%, deaths increased by 19.5%, and the number of patients hospitalized increased by 12.2%.

“The large increase in new cases across the country and in the elderly is a cause for concern, especially as we are now seeing an increase in hospitalizations for the first time,” said Professor Tim Spector, an epidemiologist at King’s College London. He added that the increase began as soon as all restrictions were lifted. Dr Jenny Harris, director general of the British Health Agency, said the presence of Omicron version BA.2 strain and a slight increase in infections over the age of 55 in the UK “shows the epidemic is not over”.

So too in Scotland the number of people with corona in hospitals is at the highest level in 13 months. Last Wednesday, 1,636 patients were reported at the hospital, higher than the peak during the Omicron wave in January.

Case rates in France rose more than 25% on Friday compared to a week earlier. The Ministry of Health recorded 72,399 new infections on Friday, while the seven-day moving average of new infections also rose, for the fourth day in a row, by almost 16% to more than 60,000.

A general decline in the world

According to the latest update from the World Health Organization, last Tuesday, the number of new cases has dropped by 5% worldwide compared to the previous week.

However, this decrease disguises a huge difference in the condition of the virus in different parts of the world. While cases in Europe were down 18%, and cases in the Americas were down 24%, cases in the western Pacific – the World Health Organization area that includes China – were up 46%.

Is the corona on its way to disappear? 3 possible scenarios