The coefficient of infection crossed the 1st: What is the chance of a new outbreak? 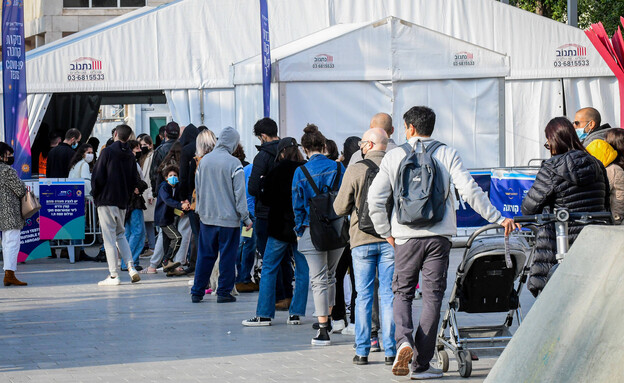 For the first time since the last wave, the infection coefficient has risen to 1.1, which indicates a trend of spread of the corona plague. According to the data, the number of carriers now stands at 43,630 and the number of hospitalized remains relatively stable, with 331 people hospitalized in critical condition, of whom 143 are respirated and 23 are connected to an Acme machine. At present it seems that the central question is whether we are in the continuation of a fifth wave, or at first possible of another wave that may bring with it further restrictions.”I think that today we in Israel are in a very similar scenario to what we have seen in countries like Denmark or Austria and the Netherlands,” says Prof. Cyril Cohen, head of the Immunotherapy Laboratory at Bar Ilan University and a member of the Corona Vaccine Clinical Trials Advisory Committee. “In Denmark for example they thought we were at the peak of the wave, after a small drop suddenly the data started to go up again and the reason for that was the BA2 variant. With the 1 then came the 2 that uploaded the data.

Although these are supposedly related strains there is still a difference in their genetic profile. “The good news is that in the meantime they are both of similar severity, meaning there is no serious illness and therefore our attitude should not change. But there is an asterisk about the fact that BA2 is spreading faster than the omicron.

It is very difficult to say where we are approaching, a fifth or sixth wave. In my opinion what we are seeing is a mixing of a decrease of BA1 on the one hand and an increase of BA2 on the one hand. There is no separation as we have seen before between the alpha and the delta and between that and the micron and so on. In my opinion, what needs to be determined is less the number of daily infections, because if the situation in the hospitals and there we see a stabilization of the number that was indeed in the decline that stopped but there is the stabilization around 300. That means there is a chance for a new rise. ”

According to Prof. Cohen, the large numbers we have seen recently will not return soon. “It’s hard for me to see that we go back to a hundred thousand cases a day as we saw before. But keep in mind, the more people get infected we see the creation of more variants and already today we can count 15 variants of the omicron itself developed in the world. “BA1 and BA2 as discovered in Israel and complicates our picture a bit. Because it means we see accelerated evolution of the corona both because of rapid infection and because of combinations of different strains in a given strain and not point mutations as we have seen more or less so far.”

“We have learned not to make accurate statements. But I estimate that we will see an increase that I do not think will reach 80, one hundred thousand people we saw a few months ago. It is not backed up by data yet, but I estimate there will be an increase around 10 or 20 thousand. To be based on that is the situation in the hospitals. ”

“We are still in the fifth wave”

Professor Nadav Davidovich, a public health expert and head of the School of Public Health at Ben-Gurion University, provides similar assessments to Professor Cohen. He said, “We are still in the fifth wave. “The event was postponed due to material fatigue and the war in Ukraine that made headlines.”

He points out that there is a need to emphasize the issue of vaccines. “What is worrying is that people are not getting vaccinated. I am able to understand the hesitation that was at the beginning of the epidemic, but today it is absolutely clear that the vaccine is a safe thing.” According to Professor Davidovich, “Vaccines have saved some 20,000 people from death and even now people are dying because they are simply not vaccinated. I think beyond the personal responsibility for the citizens, the government should invest much more in encouraging immunization and allocating resources for it.”

Is the corona on its way to disappear? 3 possible scenarios