“The situation in Israel is very different from the United Kingdom” 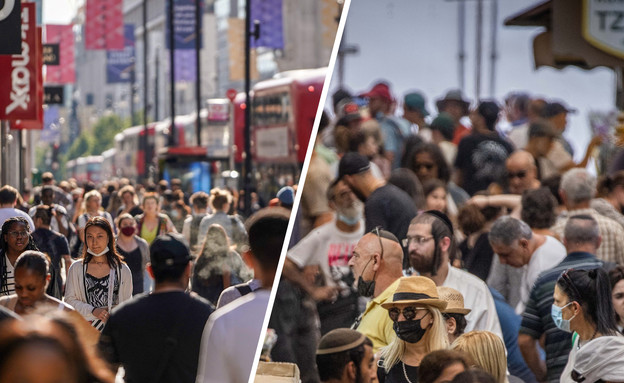 Precisely when things seemed to be moving in the right direction, as the Western world gradually opened up and morbidity in vaccinated countries diminished, the Delta variant came and preyed on the cards. The virus, originally called the Indian variant, has so far infected millions of people and killed hundreds of thousands according to official data – in practice it is probably much more. The world has recently reached 200 million verified from the outbreak of the plague. The time it took to get from 100 million to 200 million was half the time it took to reach the first 100 million.

During the spring the highly contagious variant spread from India to other countries, including Israel, and from there to the whole world. The first disturbing reports came from countries that vaccinated a significant portion of their population with controversial Chinese vaccines, such as the United Arab Emirates, the Seychelles, Chile and Mongolia, and found more and more infected vaccines. Later, similar cases began to appear in countries that used Western vaccines, such as those of the companies Pfizer, Moderna and Astra-Zenika. When in May the number of verified patients began to re-climb in the UK as well, it was already clear that there was a problem here.

According to current estimates, the protection efficacy that vaccines provide from infection or symptomatic disease has significantly decreased compared to the new and aggressive variant. According to the stricter estimates, their efficiency has dropped to about 40 percent, and the permissive estimates still speak of 88 percent. The real number is probably somewhere between the two estimates. The good news is that the vaccine still protects well from serious illness, which is well reflected in the graphs of the UK and Israel. At the height of the current wave in the UK the death toll was ten times lower than the previous wave in January, before the vaccination campaign was completed.

An interesting process is now happening in the UK. About two weeks ago, when the wave of morbidity was at its peak, it was decided to open up the economy and abolish all restrictions on the public, in a controversial move. Contrary to expectations, morbidity in the UK is declining and there is a feeling that the combination of a high immunization rate (70 received at least one dose and 58 percent were vaccinated twice) and about 4.5 million known recoverers – about seven percent of the population – and in practice probably much closer. , Despite the breakthroughs in the protection of the vaccine. We wish the British that the virus will not come back and inflict another blow on them, as it has done repeatedly in the last year and a half.

In the meantime in Israel

Our situation is very different. Morbidity in Israel is rising and shows no signs of stopping. This may be due to the lower immunization rate due to the high percentage of children in the population, or due to the different immunization protocol, as in the UK they waited up to three months between the first and second dose. It may be simply that Israel has been less affected by previous waves. In any case, the “wait and be okay” policy does not seem to be working, and there is already talk of a holiday closure.

If that wasn’t enough, a burglary was recently identified in the immunity of vaccinated adults over the age of 60, who as I recall were among the first to be vaccinated. The phenomenon may be related to the decline of the immune memory, which occurred in parallel with the emergence of a much more contagious virus than its predecessors. Another possibility is that the Delta variant is slightly different from the variants that preceded it and therefore manages to partially evade the protection afforded by the vaccine.

In an attempt to deal with this breakthrough, they began vaccinating the elderly in Israel in a third dose this week. We are the first country to give a third dose of Western vaccine, and many countries are watching us curiously to see the results of the move. So far, about 260,000 adults have been vaccinated in the third dose, leaving more than a million more.

The World Health Organization is monitoring the vaccination with a third dose, which this week urged Western countries to avoid vaccinating their citizens in a third dose, in order to keep as many vaccines as possible for countries that have difficulty obtaining them, hoping to reach ten percent worldwide vaccination around September.

The response from the largest consumer of Western vaccine doses in the past six months, the United States, was not long in coming. At a news conference, a White House spokeswoman announced that the United States is considering giving a third dose if it turns out to be necessary, and that it will not come at the expense of donating vaccine doses to developing countries. It is also a place to mention that the global epidemic will not stop until a significant portion of the world population is vaccinated or infected and recovers.

Meanwhile, the US Food and Drug Administration (FDA) has announced that it intends to examine earlier this month the possibility of giving permanent approval for vaccines against the corona virus instead of the emergency approval given last December. The hope is that the move will increase public confidence in the vaccine and encourage more hesitant vaccines to protect themselves from the disease.

Meanwhile, the variant in the Delta variant is also rising in the United States. In countries within which the immunization rate is relatively low, plays that we had already hoped to forget are beginning to be re-seen. It is important to emphasize that most of the casualties there are people who have not been vaccinated, which only illustrates how bad our situation would have been had it not been for the vaccines. And yet, one of the hospitals in Louisiana reached insufficiency this week, mostly because of the multiplicity of infections among staff members.

This week, several studies were published that shed light on interesting points about the Delta variant and the function of the vaccine against it. A study by Maccabi Health Services in Israel showed that boys aged 15-12 who were recently vaccinated are protected from infection with the variant at a rate similar to what we saw in the winter compared to the other variants. (About 95 percent). Another study showed that the viral load in vaccinated people dropped faster compared to unvaccinated ones, this figure joins doctors’ evidence that severely vaccinated people are released from hospital faster full of vaccinated in the same condition, and a study from Sheba Hospital showed that vaccinated medical staff have neutralized antibodies. Their blood affected the severity of the disease. The study was done on adherence to the alpha variant, but there is a high probability that the same is true for the delta variant.

A recent and intriguing study deals with the prevention of infection within families. One of the most effective ways to get infected in Corona is to be in one household with a sick family member. A new study has shown that treatment with an antibody cocktail from Regeneron significantly reduces, about three times, the risk of contracting corona from a close family member and getting sick.

Such treatments are most often used to prevent deterioration in the condition of people who have already been infected, as was done to former United States President Donald Trump when he was infected in Corona. This is now the first time that the ability of the treatment to prevent infection has also been demonstrated. However, keep in mind that even if it is approved, it is not a cheap treatment, so it is very doubtful whether it will be accessible to everyone.