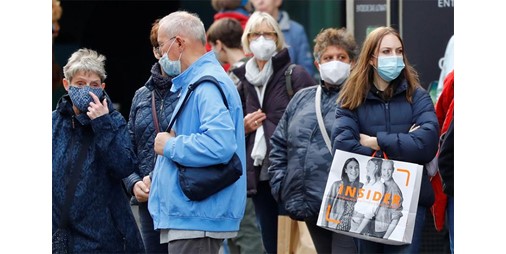 The results of an opinion poll conducted in Germany revealed that a large number of citizens intend to continue wearing masks in closed halls, despite the easing of anti-Corona measures.

The results of the poll showed that two out of five Germans (41%) intend to continue wearing the muzzle inside shops, for example, or in transportation, even if there is no longer a mandatory wearing of the muzzle in the context of canceling Corona procedures.

According to the poll conducted by YouGov, 27% of those surveyed said that they would re-wear the muzzle in this case from time to time, while 9% said they would rarely wear it.

On the other hand, 17% of those surveyed said that they would never wear a muzzle if the compulsory wearing was canceled, while 7% did not give an answer to the question posed by the institute.

The results indicated that the percentage of women who intend to continue wearing the muzzle in closed halls, even after the compulsory wearing of it is abolished, exceeded the percentage of men (43% compared to 39%).

It is noteworthy that most of the anti-Coronavirus rules are expected to be canceled based on a government decision, despite the continued high numbers of new cases.

And the states, after a transitional period that will last until the second of next April, can impose wide-ranging restrictions that include re-applying the compulsory wearing of the muzzle and rules for entry only if the state parliament in question approves a critical situation in the so-called hot spots with high numbers of injuries.

The resolution did not stipulate boundary values ​​after which states would begin to intervene.

However, in this case, these hotspots will not apply all the previous measures to combat Corona, but they will apply measures that exceed the basic protection measures.

92 cases of anthrax have been found worldwide