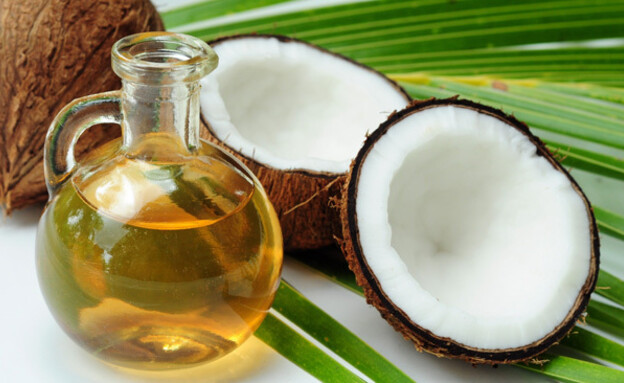 Coconut oil is one of the most common oils in the food industry in recent years. The routine use of oil is done when it is distilled, bleached and odorless but at the same time in recent years the trend is to use more and more oil in its unrefined form. The use and production of the oil has been booming in recent years with the bulk of the oil being used in the Far East in countries like the Philippines, Indonesia and India but also across Europe and the United States. the motherUnusual saturated fat

One of the benefits attributed to coconut oil lies in its composition. Because it is an oil that contains mainly saturated fat it is in the same category along with butter, palm oil and other animal oils. Saturated fat is mainly found in oils that come directly from the animal and its advantage is its high smoking point that allows it to be used at higher temperatures, in frying for example, without harming the structure and taste of the oil itself. At the same time, saturated fat is a fat that is less recommended to consume in the daily diet because it is associated with the development of cardiovascular disease, and even with mortality. Therefore the recommendation is to consume as little saturated fat as possible routinely.

In recent years, coconut oil has been more researched and found to have a fatty acid composition, fundamentally different from regular saturated fat that comes from animal. It seems that the fatty acids that make it up can actually affect the body in a different and more positive way. Chain Medium Fatty Acids (MCT) Are fatty acids that are easier for the body to digest and require less processes than long-chain fatty acids (LCT) In order to be absorbed and give us energy, coconut oil mainly consists of lauric acid which is admittedly not exactly MCT But in its features it behaves more like MCT Than acids LCT Normal and therefore consumption of coconut fat and its digestion in the body may contribute to the body or at least not harm like consumption of regular saturated fat that comes from the animal. At the same time the question was asked whether this feature gives him any health benefit? For on the one hand it is still saturated fat that it is recommended to reduce consumption of it in the diet and on the other hand it is not exactly saturated fat that comes from animal.

A study by the Department of Public Health at Cambridge University published in 2018 found that although butter and coconut oil both belong to the saturated fat group, the effects of coconut oil were found to be more similar to olive oil which is known to be healthy and recommended for consumption and has beneficial effects on the body. The two oils did not change the levels ofLDL (Bad cholesterol as it is commonly called) in the blood, in addition to coconut oil even raised the levels ofHDL (Good cholesterol) among the subjects. The study does not change the recommendation regarding the consumption of saturated fat, but emphasizes that not all saturated fat is composed of the same fatty acids and there are oils like coconut oil that may also be part of a balanced and nutritious diet.

Another surprising benefit that can be attributed to coconut oil is the prevention of diseases and maintaining hygiene in the oral cavity. Although studies on the effectiveness of the oil on oral health are still limited and do not give an unequivocal position, the trend still shows that a combination of coconut oil along with the usual dental and oral cavity preparations may be beneficial in maintaining oral health and hygiene. Coconut oil as such is a relatively inexpensive oil and is therefore available to most people around the world and may also have a place in terms of oral hygiene.

The possible benefit of coconut oil for improving the weight loss process has been talked about quite a bit in recent years, but at the same time there is still no professional literature indicating any physiological advantage that the use of coconut oil has on the weight loss process. In addition if there is such an advantage, the recommended amount to use also remains in question.

In recent years a number of studies have attempted to answer these questions, with one study by Weil Edimi from the Department of Physiology at Radimer University in Nigeria published in 2020 in the Monthly Biomedicine & Pharmacotherapy In 2020, Find that using coconut oil does not speed up the weight loss process as the condition for weight loss is a caloric deficit. At the same time, benefits were found to decrease the amount of fat around the liver tissue and to improve blood biochemical indices such as cholesterol, LDLTriglycerides, bilirubin and more, when consuming small doses of coconut oil (200 mg per kg body weight) among people who are overweight or obese and deteriorating in these indices in high consumption (600 mg per kg body weight).

In conclusion, Coconut oil is indeed an oil with many benefits, so it is probably preferred for consumption over regular saturated fat that comes from animal. At the same time it is important to remember that this oil is not defined as a superfood, and is still considered a saturated fat. This is a fat that according to the recommendations of the World Health Organization (WHO) It is recommended to reduce consumption from it and prefer consumption of unsaturated fat that comes mostly from vegetable sources like olive oil, avocado, seeds, nuts. It can be said that products like coconut oil can be complementary products in the diet but not its base as we have seen in the studies above. It is of course advisable to continue researching and keeping up to date with new studies regarding additional benefits of coconut oil as this topic has been researched quite a bit in recent years.

Leon Weiner, Clinical Dietitian, The Association of Dietitians and Nutritionists in Israel – Atid