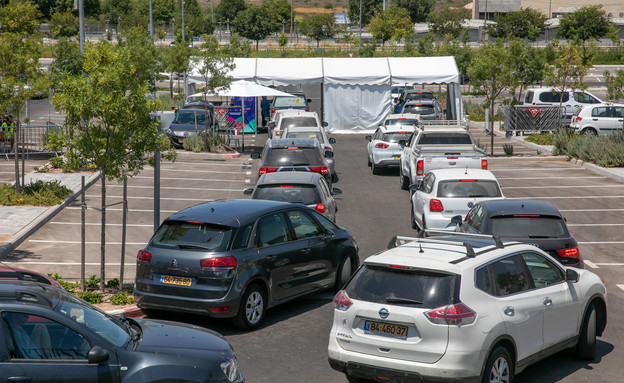 Despite the Minister of Health’s promises to the HMOs, abnormal loads have been recorded in the corona examination complexes for three weeks. Mako has received many complaints regarding loads recorded in testing complexes in the Sharon area, in Netanya, which also serves the surrounding cities and towns, in Be’er Sheva, where residents of Ofakim, Netivot and the Bedouin diaspora and other areas are also being checked.

HMOs acknowledge the problem and say that reports of congestion were forwarded to the Ministry of Health and the Home Front Command’s Alon headquarters about two weeks ago, but almost no action has been taken since then and no new test complexes have been set up to alleviate the congestion. Along with discomfort to citizens, it is a critical component in the war against the virus as effective and early detection helps in rapid amputation of the infection chain.

The number of tests in Israel in recent weeks has ranged from about 50,000 to 90,000 tests per day, compared to more than 100,000 tests on the days of the third wave. The health system and the headquarters for the fight against Corona understand that extensive and effective tests are the basis for preventing the spread of the virus, but it seems that the system is simply not ready to deal with the number of citizens who come to be tested. Both the HMOs and MDA centers know how to report many cases in which citizens who despaired of the queue simply left the compound without being examined.

The Ministry of Health calls on anyone who feels symptoms or has come in contact with a verified patient to be tested for corona, even in the case of vaccinated. To these must be added the travelers and returnees from abroad who are required to have a corona examination, those who have been in contact with a verifier whose number increases as the morbidity data increases, so it happens that every day that passes the number of those required to be tested increases significantly.

All the health funds, as well as MDA, state that three weeks ago they began to submit reports on congestion to the Ministry of Health and the Alon headquarters of the Home Front Command, along with a request to open additional complexes. Simple and for long hours.However, despite the reports, almost on a daily basis, no significant budget was transferred and in addition no logistical preparations were made in order to cope with the growing demand for inspections.which produces the huge queues that are only growing.

The default on the subject is twofold, this is because the morbidity data as they are today was already known about two weeks ago. Even then, estimates were presented to the political echelon and the Ministry of Health based on models from the Home Front Command, which showed that the number of verified people would reach more than 3,000 this week, and that is exactly what happened. In light of this it was clear that the number of subjects would also climb rapidly, although no proper assessments were made and no more Corona test sites were opened.

A source at one of the health funds explains that the big problem is that even if they could improve the situation today, the process would take a week or more. This is because it is necessary to recruit samples and train them. A story of a few days to a week. Even in the case of reservists, after over a year and a half of crisis, quite a few of them have completed their annual reserve quota, which requires special approval to recruit them when not everyone is interested and which also micromanages the cost of their recruitment. Meanwhile, many citizens are forced to queue in unusually long queues and morbidity figures rise, with the main tool that is supposed to help cut off the chain of infection not working properly and fully.

The problem of corona queues is also compounded by the problem of waiting times for the test result for those who have already managed to reach their destination and are sampled. According to data from the Ministry of Health and companies, the reliability of the tests stands at over 95 percent. Language only It should be noted that this is provided that the testing of the samples in the laboratories has been carried out in a time span of 24 to 48 hours. However, many citizens are waiting for the results of the tests they have done for 72 hours and beyond. Probably due to the existing load on the labs. This means that the test results in these cases are unreliable. Which of course adds to the problems in the chain whose whole purpose is to cut off the chain of infection in order to lower the morbidity data. There is a high probability that many people who received a positive result were not carriers of the virus and worse, there are quite a few who received a negative result and returned to public space carrying the virus.

Rona (pseudonym) was examined last week after discovering she had been exposed to a verified corona patient, who had been vaccinated twice. After the first test she did was damaged and not sent for a lab test at all, she called the HMO with the goal of determining again. Because no queues were available, she was checked at the Home Front Command compound. When she began looking for the results that did not come, she was referred by the Home Front Command again to the HMO. “I called the cashier to try to find out if the sample had reached them at all, they claimed they had no way of knowing. After another 24 hours, I talked to the cashier again, explained to them that I had put myself in isolation and they did not understand why, because I was vaccinated. “If I do not feel safe, I can go again.” In the end, only after 72 hours, the negative test result came, “she says.

No response has yet been received from the Ministry of Health.