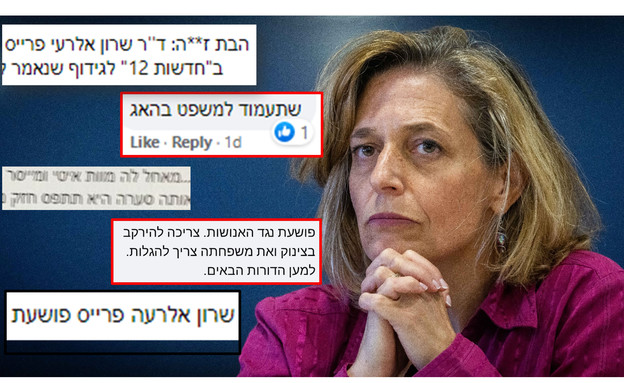 The head of the public health services, Dr. Sharon Elrai Price, did not hide her frustration last night in the face of the Knesset’s failure to address an incident that occurred this week in the Constitution Committee in which one of the participants present at Zoom cursed it. “Shame they did not find out who the person who cursed me was,” she told Danny Kushmero in Studio Six, adding that “these are very difficult days, the discourse has descended into an abusive, violent, shallow and degrading form and something needs to be done about it.” Elrai-Price also said she had filed a formal complaint with the police following the sharp attacks against her.

Indeed, the discourse on social media against Elrai-Price has been escalating in recent weeks with the decision to give a third dose of vaccine and talk of a fourth closure. It is led by dozens of vaccine opponents who have targeted Al-Rai-Price and her colleagues in the Ministry of Health.

You can find dozens of posts visible to anyone who longs for her death, curses her and her family and calls for her to be prosecuted. One of them is Jonathan Nissim Alfasi, a 27-year-old resident of Kiryat Motzkin.

After his interrogation at the Alfasi police station, he was brought to the Krayot Magistrate’s Court for a hearing on the extension of detention. The police representative asked for an extension of his detention by five days on the grounds that his conduct endangered public safety, but the judge decided to accept Alfasi’s defense attorney, Adv. Tomer Naveh, and released him under five-day house arrest.

While under house arrest, Alfasi distributes our doctrine and publishes inciting posts wishing for the death of Elrai-Price, who as of this writing has not yet been dealt with by the police. Yesterday, Alfasi wrote on his Facebook page that Elrai-Price “is in fact an undercover agent of a dangerous group that is running a huge experiment on us in full control of the population … wishing her a tormenting slow death. “And I’m pretty sure when we get out of this storm in another storm … in that storm it will be caught very strongly,” Alfasi wrote.

In response to Mako’s request on the subject, the police initially said that no complaint had yet been filed regarding the publication of the post and the matter of opening an investigation was being investigated by legal sources. Tonight, the police have already decided on time for the investigation.