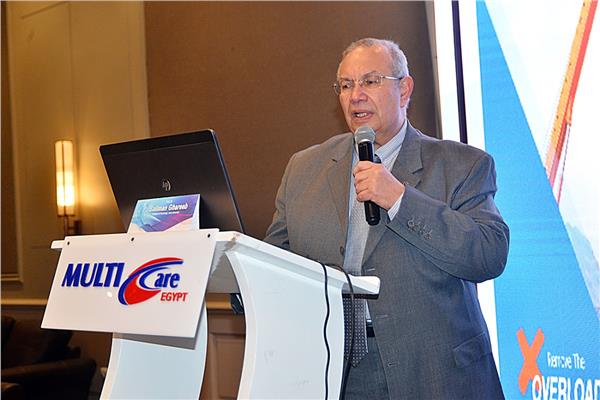 A few days ago, Multicare Pharmaceutical Industries organized an important scientific meeting, during which it announced the launch of the latest drugs for the treatment of hypertension and type 2 diabetes, “Kerdipine Plus” and “Glimbaker”, in the presence of a large number of internal medicine, cardiologists, diabetes and endocrinologists.

Dr. Enas Shaltout, Professor of Diabetes and Endocrinology at the Faculty of Medicine, Kasr Al-Ainy and President of the Arab Society for the Study of Diabetes, confirmed that the latest statistics of the International Federation of Diabetes, the largest international gathering of international sugar societies, issued in December 2021, said that Egypt is ranked ninth in the world. In terms of the number of diabetics with a total of nearly 10.9 million diabetics, 95% of them are of type 2, noting that 50% of diabetics, especially in the Middle East countries, do not know that they have the disease, and therefore they remain for years without a diagnosis or receiving any Treatment and when diabetes is discovered, they have had serious complications.

Shaltout added that diabetes caused global deaths during 2021, reaching 6 million deaths, a remarkable increase from the previous statistic in 2019, in addition to the fact that the coincidence of diabetes with Covid infection increased complications of diabetes as well as the number of people infected with it, justifying This is because the virus can attack the pancreas, causing recent infections with diabetes, as well as the adoption of the treatment protocol at the beginning of the pandemic in 2020 on cortisone, which caused a large number of patients with diabetes, which was controlled in the recommendations for treating Corona later using cortisone in Limited cases.

Commenting on the pharmacological group to which the drug “Glimbaker” belongs, the head of the Arab Association for the Study of Diabetes explained that the treatments that work through the kidneys have been used for about 7 years in the global market, and besides their work to reduce the level of cumulative sugar, they help in weight loss, especially And that 80% of patients with type 2 diabetes suffer from obesity, and therefore losing weight improves their diabetes, adding that the second advantage of this drug is that it was found to be safe on the heart and even benefit it and improve its health by reducing the occurrence of strokes and heart failure (suffering from it). 25% of diabetic patients), as well as reducing the death rate due to heart disease, which is a therapeutic revolution, especially as it reduces the incidence of diabetic nephropathy, as well as reduces albumin in the urine of a diabetic, which is the first indicator of renal disease, as well as reduces the deterioration of the kidney condition with Diabetes progresses, and also reduces the progression of nephropathy to renal failure.

For his part, Dr. Suleiman Ghareeb, Professor of Cardiovascular Diseases at Kasr Al-Aini Medicine, explained that some people mistakenly think that redness of the eye and headache are symptoms of high blood pressure, noting that the danger of pressure lies in that its first symptom can be a blood clot in the brain, especially since 83% of blood meters are inaccurate and give misleading measurements.

Regarding the treatment of high blood pressure, Gharib pointed out that there are more than 300 treatments for high blood pressure, but the first method of treatment is to change the lifestyle, pointing out that high blood pressure is linked to problems in the arteries of the heart, so it must be taken into account that the drug used to reduce the level of pressure in patients The patient also has a positive effect on the arteries of the heart, kidneys and brain, such as the drug “Kerdipine” or “Kerdipine Plus”, which gradually lowers the level of blood pressure, protecting the patient from clots resulting from the sudden reduction in blood pressure at once, as well as protecting the kidneys, as well as improving the condition of blood vessels in the brain In addition, its concentration and price are suitable for the Egyptian patient.

In Haditha, the professor of cardiovascular diseases touched on one of the advantages of the new drug, which is that it does not cause swelling in the feet like other pressure medications, so the doctor does not mislead between treating pressure and heart failure, and that the patient stops taking it once does not cause sudden high blood pressure.

Dr. Rasha Hassan, Executive Director of the Scientific Office of Multicare, said that the company’s “Cerdipine Plus” for the treatment of pressure diseases is a real breakthrough in the field of treating pressure and kidney diseases, as it is the product of a combination of two types of pressure treatments (lercanidipine plus). enalapril) in which many of the side effects of traditional treatment were avoided, such as the negative impact on kidney disease, albuminuria and a number of other diseases, stressing that “Multicare” is keen to provide everything new in the Egyptian market and maximize the benefit for the Egyptian patient.

The Executive Director of the Scientific Office of “Multicare” stressed the importance of “Glimbaker” for the treatment of diabetes patients, which contains (Empagliflozin 10 & 25 mg) because of its effectiveness in treating and controlling high blood sugar levels and also protection to reduce heart disease. And blood vessels, kidney and liver diseases.

Dr. Osama Antar, Chairman of the Board of Directors of Multicare Pharmaceutical Industries, stated that “Multicare”, which was established in the Egyptian market in 2001, owns many pharmaceutical varieties in various medical specialties, and always has a lead in terms of innovation in the pharmaceutical industries in the Egyptian market, stressing that In the case of the presence of the same active substance in another class in the market, different advantages are added to the same active substance before the release of the product of the “Multicare” company.

Dr. Osama Antar added that the Egyptian pharmaceutical industry has very great opportunities for export growth and control of the African market in light of the great efforts made by the Egyptian state in this file, explaining that the export price competition is in the interest of the Egyptian pharmaceutical product, whose price is lower than its external competitor by rates ranging between 50 And 75%, which makes us able to achieve great successes in exporting the Egyptian medicine within a few years, given our technical and manufacturing expertise.