Does the moon affect our behavior? 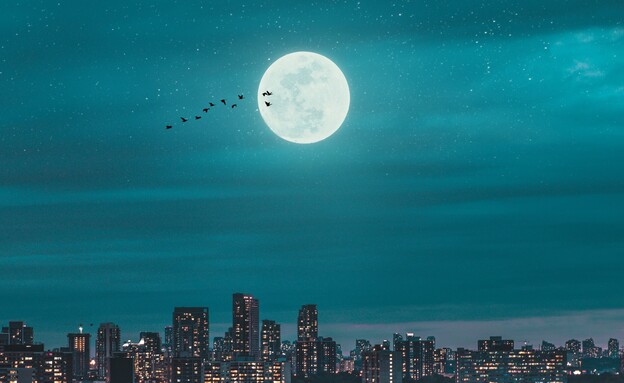 Throughout all generations the relation to the moon has crossed religions, peoples and cultures and connected metaphysics to the world of psychology. Peoples around the world worshiped the moon and treated it as a tk idol in the belief that it has real power to affect their lives and health. According to astrology, the moon’s symbolizes the world of emotions and represents throughout its menstrual cycle the process of building a personal identity, and in Shakespeare’s play Othello, servant Emilia tells Othello that the moon has moved too close to Earth and driven people crazy.Quite a few more or less strange connections have been suggested over the years between the moon and human behaviors. In the first century AD the Roman philosopher Pliny suggested that the full moon causes the formation of dew, which he claimed led to an increase in moisture in the brain, which, he said, could cause insanity. Aristotle believed that because the brain is moist, it may be affected in the same ways that Earth’s waters are affected by the moon. According to him, the moon has the power to cause insanity, epilepsy or bouts of insanity.

Some modern thinkers have also been preoccupied with these ideas. The psychiatrist Arnold Lieber dealt extensively with the field in his books “The Moon Effect: Biological Tide and Human Emotions,” written in 1978, and “How the Moon Affects You” – a controversial book about the moon’s tremendous power to influence our emotions. Lieber suggested that because the human body contains about 70% water, humans experience tidal changes caused by the phases of the moon, just like the oceans of the earth. He said in full moon situations murders, suicides, aggravated assault, psychiatric emergencies and fatal road accidents rise dramatically.

The idea that a full moon can evoke emotions, evoke certain behaviors and even cause physical illness continues to be common even today. One study claims that over 80% of mental health professionals believe that the moon has the power to affect and change our health – both mentally and physically.

While science is still trying to figure out exactly why this happens, it turns out that the moon’s impact is far from a random myth and there are quite a few studies that have been done in recent years that have found interesting and surprising connections between lunar cycles and different and strange behaviors.

A scientific paper published in the 1970s Ten Just as the moon has a profound effect on water, so it can also change the way blood flows in our body. When we look at all the studies that have been done since then, the studies are less certain in relation to the effect of the moon on blood circulation and heart rate.

A 2013 study found a number of cases in which heart rate and blood pressure in men dropped significantly when the moon was full. as per Research Otherwise, if someone harms undergoing heart surgery, performing during a full moon can increase their chances of survival and even shorten their hospital stay.

Impact on the menstrual cycle

Menstrual cycles are related to lunar cycles because while a full moon occurs every 29 days, a menstrual cycle usually repeats itself every 28 days. Ovulation occurs about 12 days before a woman’s period begins. This means that if the cycle is planned to start around a full moon, it will probably ovulate around a new moon. On the other hand, women whose cycles tend to occur around the new moon will ovulate during the full moon.

It has been found that a woman’s temperature tends to rise slightly (around 0.5%) when ovulation occurs during a full moon which increases the chance of giving birth to a male child. Some Studies It is claimed that there is an increase in births during a full moon (due to its gravity).

More sleep disorders in the middle of the month

Studies suggest a link between difficulty sleeping and the full moon period. A surprising study finds that many take an extra five minutes to fall asleep during a full moon period. In addition, there are those who sleep 20 minutes less and a 30% reduction in deep sleep (REM) is expected.

A study published in Sleep Medicine in 2014 estimated the sleep quality of 319 participants during different lunar phases. This study found that during a full moon, participants had lower sleep efficiency. A 2015 study found that the full moon may affect sleep differently in males and females. While women slept less deeply during the full moon period, men actually had more REM sleep during this period.

A 1984 study found that the crime rate may rise at nights with a full moon. Its authors said it may be due to “human tidal waves caused by the moon’s gravity”. A more recent study published in 2009 claims that psychiatric hospitals hospitalized more people during the full moon period. The study, which examined the records of 91 patients “with violent and acute behavior disorder,” found that 23% of these hospitalizations occurred during the full moon.

However, other studies have contradicted the notion that the full moon causes people to harm themselves and others. Research Published In 1998 he found that there was “no significant relationship” between any phase of the moon and an increase in violent behavior. In 2019, Researchers From Switzerland and the United States analyzed the data of 17,966 people treated in 15 different psychiatric wards for 10 years. This study also found no evidence of increased aggression in the full moon phase.