A young mind in an older body – what is the rare progeria syndrome? 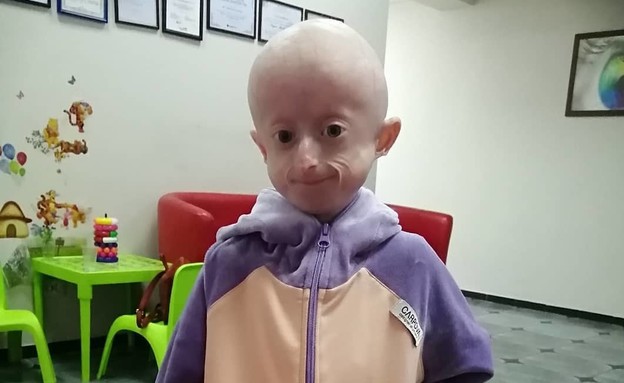 The film “The Wonderful Story of Benjamin Button,” starring actor Brad Pitt, which depicts how a man is born old and slowly becomes younger until he becomes a baby, actually presents an opposite situation from progestery syndrome. In progeria syndrome the children are born with an adult appearance and suffer from diseases of older people, resulting in dying at a very young age.

10.year.old Irena Kimitz from Ukraine was a girl in the body of an 80.year.old woman, and recently died of heart failure as a result of progeria. In her short life she became a talented artist and managed to present her works in exhibitions in Ukraine. Her big dream was to visit Paris and display her works in the major museums, but this week her mother announced her passing through a heartbreaking post on Facebook.

What is Progeria Syndrome?

Hutchinson.Gilford Progeria Syndrome is a rare genetic disease that causes premature and accelerated aging and premature death of children. Children with this disease are born healthy and the first signs begin to appear at the age of two. Body fat, hair loss, aging tooth decay of the skin and the appearance of wrinkles.Also, they suffer from adult diseases such as hypertension, high cholesterol and heart disease.

The word progria originates from the Greek language and means – premature aging. At first, babies born with this syndrome look perfectly healthy, but when they reach the age of a year and a half or more, signs of the syndrome begin, which include slow growth from the norm, baldness, faces that remain smaller than normal, a small jaw and more. After a period more severe signs develop which include signs of real aging, wrinkled skin and extreme thinness, low stature and more.

The disease does not affect the level of intellectual development and the children with this disease develop mentally just like their peers. The average life expectancy of these patients is 14.6 years, but there is only one patient from the United States who managed to survive at age 43, and she is considered a medical miracle and the oldest progeria patient in history. The incidence is 1 in 20 million, and currently only one patient lives in Israel Suffering from the disease.

What causes the disease?

In most cases the disease is caused by a random mutation, which is not inherited. One of the reasons that this disease is difficult to inherit is that most of its patients do not reach a normal sexual maturity and therefore do not start families. At the same time, there are a few families in which the disease has been inherited and some of the family members suffer from it. Until now, doctors have been helpless in the face of the disease – medical treatment has focused on treating the symptoms of aging rather than the disease itself, and patients have suffered severe effects on their lives. The only treatment options included supportive care and treatments aimed at complications resulting from the disease. Today, there is a unique drug approved several months ago by the FDA that inhibits the development of the disease and prolongs the life expectancy of its patients.

Progria syndrome is an example of a rare disease. The group of rare diseases poses a challenge to the treating physicians, both because their diagnosis is often delayed as they are rare and not usually known to the medical establishment, and because several systems are involved in the body. In the past year, a number of specialized centers for rare diseases have been opened in the Tel Hashomer, Soroka, Wolfson and Haemek hospitals, with the understanding that these diseases require special and separate treatment.