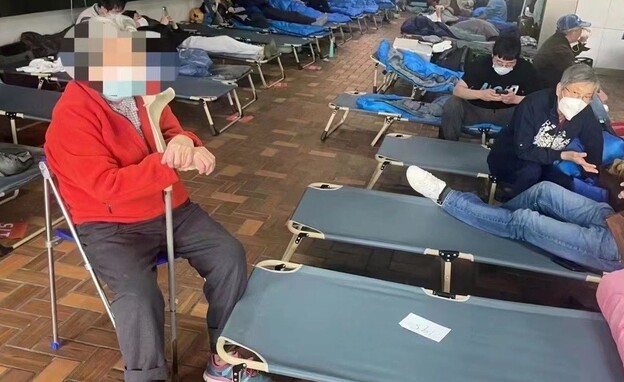 The major eruption in Shanghai has forced city authorities to take extreme measures, and while in most of the world only more and more restrictions are being lifted, nearly 25 million Chinese city residents have been under a rigid closure for more than three weeks. And if that’s not enough, authorities last Thursday announced tougher restrictions in some counties. Emergency centers to which patients are sent have opened, and many complaints about unbearable living conditions are beginning to emerge. A video posted on Sky News shows some of the tough conditions.

The person who shared the videos is at the quarantine center and asked to remain anonymous because police have threatened punishment for anyone passing on information from inside. He photographed the chairs on which people, even the elderly, are forced to sleep: “There are about 160 to 180 sunbeds on this floor,” he described in a conversation with Sky News. “They forcibly took people from their homes in the middle of the night and did not provide them with the medical support they needed,” he added, concluding: “There is no doubt that it is dangerous for the elderly and sick people who are here.”

Many patients also do not receive proper hygiene conditions and there are not even showers in the enclosed areas. In addition, many calls for help from relatives of those who are in those centers are starting to be heard on the street as well. In a post written by one resident, she pleads for help for her grandmother: “Please rescue my 90-year-old grandmother. Yesterday at 01:00 at night, she was sent to an impromptu hospital after being tested positive. She has high blood pressure, diabetes, difficulty moving and cannot treat. “The makeshift hospital does not provide her with the care she needs and she is not safe there.”