How herd immunity has eluded us 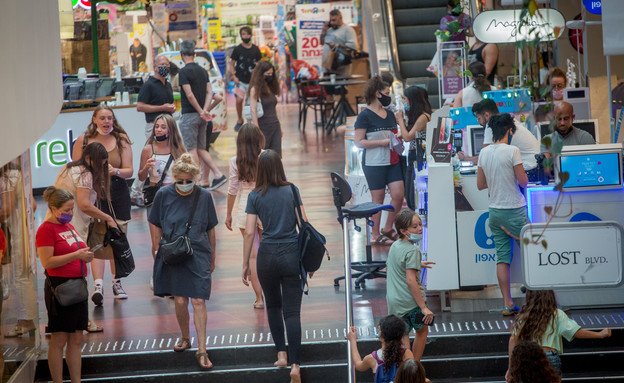 It all happened on May 25, that is, three months ago. Prof. Gili Regev Yohai of Sheba Hospital announced that Israel has reached out to the corona vaccine, even without vaccinating children. It has been a long time since that, but it seems like an eternity, and here we are again at morbidity levels that endanger the health care system. How did it happen? And is it possible to go back to the same coveted state of herd immunity?

Before we look at the past and the future, a brief explanation of what exactly herd immunity is. This has a direct relationship to parameter R, the average number of people a sick person actually infects. If each patient infects less than another person on average, even if the number is 0.99, then over time the plague will subside. Herd immunity means R less than 1 even when no restrictions are imposed.

Lowering the R: This is how the immune wall collapsed

How did we get to herd immunity or something like that in May? The size of the R depends on several parameters: vaccine effectiveness, immunization rate, number of recoverers, public behavior and how much the variant is contagious. In Israel between January and May, a very effective vaccine against a highly contagious variant was combined, with some remaining restrictions, such as masks and isolations, and together they lowered the R below 1.

As long as Corona patients did not come from abroad, as soon as the plague subsided enough, more and more restrictions could be removed and it had no meaning. There was no one to get infected from anymore. And to bring in the new, more contagious variant and the vaccine was even less effective against it, and at the same time more and more restrictions were removed, it turned out that there is no longer an immune “wall” that leaves the R low. On the contrary: the R reached an Israeli record of 2.25, higher than in all previous waves.

The third dose: Is it possible to restore the herd’s immunity

First, the third vaccine. The great hope is that it will be effective in preventing infection and serious illness just like the first and second vaccines, and then our condition is excellent, provided most of the population is vaccinated. This is the optimistic scenario, and one of the prominent voices supporting it is Prof. Eran Segal of the Weizmann Institute, who has been modeling the disease in Corona since the beginning of the epidemic and was one of the first to identify the effectiveness of vaccines.

“If today the coefficient of R is 1.3, then a 20% increase in the protection of the entire public is enough to reach an R of 1, and begin to see a decline not only of the serious illness, but of the morbidity in general. The third dose seems to improve protection against infection. .40% to 80%.

“In our estimation, in addition to the 1.6 million already vaccinated in the third dose, another 1.4 million new vaccinated are needed to lower the R to such a level.” The total population currently relevant to the third vaccine that has not yet been vaccinated is about 3.16 million Israelis.

According to the current immunization rate of about 60,000 people on weekdays and 30,000 on weekends, faculty estimate that immunization at such a level will lead to a significant decline in the epidemic by the end of September. Prof. Itamar Grotto, former Deputy Director General of the Ministry of Health, also estimates, according to current morbidity trends, that this will be the beginning of the decline.

There are some uncertainties that can challenge this scenario, and Segal also admits of course that he does not know everything. First, data on the change in vaccine efficacy were collected from those aged 60 and over. It is possible that among young people who are vaccinated later and their immune system is more effective, the difference in the effectiveness of the third dose is less than 2. In addition, it is not known what the response to the vaccine will be among young groups – so far it seems high, but difficult to predict. In addition, it is possible that returning to school will lead to an increase in morbidity.

The education system: what may prevent the curb of serious illness

In a tweet from Prof. Ran Blitzer, Clalit’s director of innovation and a member of the epidemic treatment team, he wrote: “He is working to stop the serious illness. It is still unclear who will win.“

Other health officials declined to predict: “We still do not know exactly how effective the vaccine will be and how it will be responded to, so it is impossible to predict not only the date of onset but even the possibility that it will actually arrive without further action,” they say. That is, not everyone is sure that we are rapidly rushing towards herd immunity, but perhaps in the direction of a prolonged diffuse disease.

Staff: “The more the education system operates without restrictions and the morbidity rates in it are really high, we will need even more vaccinated in the third dose to start seeing a decline, so the decline will be postponed to a later date.” Or, if not enough vaccines are accumulated, it will be necessary to provide the protection through recoverers.

Meanwhile we see that with the administration of the third vaccine, the severe morbidity of those aged 60 and over vaccinated begins to stabilize and may even decline despite the spread of the plague. In contrast, a pool of about 8% of unvaccinated (in general) people aged 60 and over “succeed” in producing about 200 new critically ill patients a day, and this figure is on the rise with no signs of stopping.

Meanwhile as the morbidity increases, we also see more recovering, and they seem to be well protected from the new variant. Of those infected in the last two months, recoverers accounted for 1%, and vaccinated recoveries – less than 1%. Will accrual of verified benefit from reaching herd immunity?

The staff counts each recovering as a double vaccine for the purpose of its calculations. Hence that if we count only recoverers with no additional vaccinators at all and put them into a staff equation, we reach the same decline only in 12 weeks, when in the meantime the situation will get worse, perhaps in a way that will take even longer to reach a decline. It should be borne in mind that even recovering patients are not fully protected, although at present they make up only about 1% of patients.

In practice it is likely that the decline will eventually come from a mix of the two, more vaccines and more verified. Attempts to reach herd immunity through recoverers in other countries have so far been unsuccessful, even in relatively vaccinated countries dealing with the Delta strain. In the UK the number of verified returns to rise after a sharp decline, which has yet to be explained. In Sweden, which has imposed late restrictions among all countries and its mortality rates are double those of Israel on a population of a similar size, there has again been an increase in morbidity in recent weeks. In Brazil, a village was previously reported where a serological survey estimated that 70% .80% of the population had fallen ill, but when a new variant arrived many of them fell ill again.

“Epidemics do not just disappear because of natural herd immunity,” Grotto says. “Here measles has been a very popular disease for years, and it did not go away until the vaccine arrived. The epidemics do naturally fade when they have fewer new victims to catch, but they do not end, but rise and fall in waves.“

Segal’s calculation takes into account a case where vaccines and morbidity are evenly distributed across the general population, when in practice there are pockets of non.immunization. The biggest immunization pocket is the kids.

The serological survey conducted this week among children aged 12.3 was canceled in many cities after the percentage of positive results was found to be low: 3% recover in cities slightly affected by the plague, up to 25% in cities most severely affected by previous waves. This means that most children are still naive, meaning they have not fallen ill.

Reaching herd immunity within schools without vaccines for children, that is, for a morbidity of 70% or more of the children, is a matter that can take many years, which will be characterized by morbidity, including severe and long.term morbidity. “In the previous wave we did manage to reach herd immunity in a population with an open education system without vaccinating the children,” Segal explains, but then the variant was less contagious. “In the near future there will be isolations, at morbidity levels at the moment it is likely that there will be a lot of isolations,” says Segal.

According to Prof. Orna Bar.On from the School of Public Health at the University of Haifa: “I think we need to find a way to run the school not in a crowded and less contagious way. Even if we go through this wave, we are probably heading for more waves.“

Grotto: “High morbidity levels, even outside schools, are contagious, and there is no point in closing them. It is different when the morbidity level is low.“

The future: Will the corona fade or learn to live with it

Other factors that can later contribute to bringing us closer to herd immunity are variant vaccines, vaccines for children under 12, and immunization among all those who have not been vaccinated, with a preference for three doses at the appropriate ages. It is unclear when and if these interventions will come.

Grotto: “If it turns out that this vaccine is really valid for all variants as long as we take it often enough, then we’ll be fine. “That completely bypasses the vaccine. But it can also happen with the flu.“

Bar.On is less optimistic: “There will be more variants. We will see more such waves, so we must learn to deal with them, and ask ourselves what level of risk each of us is willing to take.“