Cube Jellyfish: One of the most dangerous jellyfish in the world 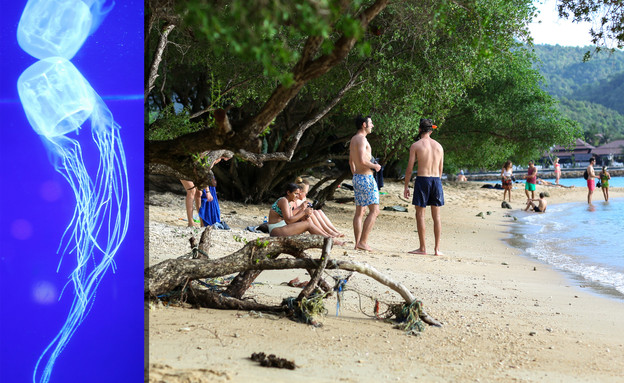 A tragic incident this morning in Ko Phangan off the coast of Thailand – a 9.year.old Israeli boy dies from a venomous jellyfish bite. Medical teams provided him with immediate medical attention but were forced to determine his death shortly after. According to reports, the offending jellyfish is a type of cubic jellyfish, a species of venomous and dangerous jellyfish that is common in Thailand.

The Box Jellyfish is considered one of the most venomous creatures that lives underwater. One of the most dangerous is Chironex fleckeri, Known as the sea wasp and is considered the deadliest jellyfish in the world. In some cases contact with it may cause pain and nausea for several days, and quite a few times, as in the present case, it may cause cardiac arrest within a few minutes. They are difficult to identify in water because they are transparent, which increases the risk of injury. There are studies that talk about dozens of deaths a year. A study examining island deaths in Thailand found that out of 15 cases, six were fatal. Three years ago, Israelis living in the area were seriously injured by a jellyfish and evacuated to the hospital for treatment.

May cause death in a short time

Prof. Miguel Geltstein, a pediatrician at Ichilov Hospital and director of the Toxicology Service (Poison Research), explains the risk of injury from the jellyfish. In many cases the venom immediately damages the heart and causes death in a short time. The venom contains several types of proteins and if one of the dangerous proteins manages to reach the heart, it is extremely dangerous. “

A possible side effect in milder cases is the development of inflammation. The bite can cause an overreaction of the immune system and inflammation throughout the body. It can also develop into dermatitis, dermatitis. But as long as you are vacationing in the country the risk of encountering the dangerous jellyfish is nil. “The risk exists in some areas, especially in Australia, Thailand and Korea, and it is common throughout the year and especially in the summer. There is no fear of this specific type in the country.“

In case of a cube jellyfish bite is there a way to treat the venom? “Similar to the bite of dangerous snakes that have developed antibodies (anti.venom) in the country to inject and neutralize the venom, Australia also has an effective substance against the venom of jellyfish, and if given within a short time of the bite, it can save lives.“

What is important to do in case of injury?

Because the jellyfish is transparent it is very difficult to detect it in advance and avoid it. Some beaches are forbidden for bathing due to the presence of venomous strains but in case of injury it is important for safety to do the following. First of all get out of the water immediately, and make sure that no part of the jellyfish is left in the body. Rinse the area with vinegar for at least half a minute. In case the pulse or breathing rate slows down, resuscitation should be started immediately.

What to avoid? Do not touch the bite site. Do not rinse the area with fresh water, alcohol or ice. Such substances can aggravate the spread of the sting in the body.