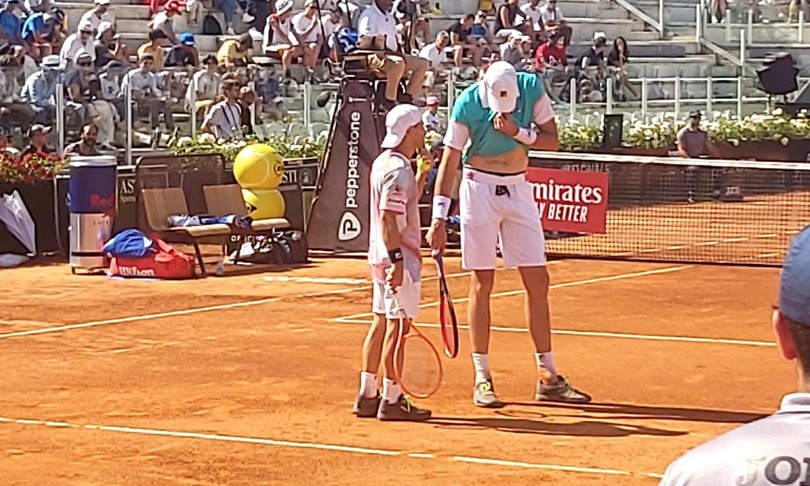 That the Croatian Mektic and Pavic won the title, after all, is just a detail from the roll of honor. What is a lost ending compared to a hashtag (#Isnerman) that will remain forever, a bit like the Brangelina of the late Pitt-Jolie couple? Because the triumphs of this double 2022 of the Internazionali d’Italia (and perhaps of the whole tournament) are undoubtedly John Isner and Diego Schwartzman, the American “long John” two meters and 8 centimeters high and “El Peque” the Argentine short that stops at one meter and 70. Not exactly the ideal in singles (disadvantage that has never managed to curb the ambitions of Diego, now 15th in the world and two years ago number 8) let alone in doubles.

The big brush and the little guy had never played together, for some time they had promised to do so and in Rome they succeeded, sending the spectators into ecstasy. Never before had such an audience been seen at the doubles final, usually followed (wrongly) by four cats.

Instead the Pietrangeli of the final between the Croatians who in the semifinals broke the dream of the double blue Fognini-Bolelli and #Isnerman was packed and not only because the match was in the interlude between the women’s and men’s final. Most of the spectators remained even when Djokovic and Tsitsipas started because the fun, the real one, was there, cheering for the little guy with the cap backwards and for the lungagnone with the cap in the right direction.

At the Pietrangeli, while the two after losing the first set recovered until the tie break of the second, winning it, a real stadium cheer was broadcast, including “Die-go, Die-go”, “Forza Jhonny” and a group in the front row who, raising up the sign with the words #Isnerman, shouted “Isner-man, Isner-man”.

Long John had a lot of fun, he was also beating the rhythm with his hand, and perhaps a moment of glory like this did not happen to him since the legendary meeting with Mahut at Wimbledon 2010 when he won after a marathon-record of eleven hours and five minutes, divided over three days.

There was a great feeling on the pitch between the long and the short: Isner number 22 in the rank of doubles and eight titles had to be the decisive man compared to Diego who in the couple specialty is only at number 307 “and zero titles” (but he was also number 39). Instead the two alternated in joy and pain, with Isner who in the tie break of the second set sent under the net, he who should dominate the net from the top of his two meters and passes, an easy volley even for a tennis player on Sunday, but who then canceled the match point at 9-8 in the final supertie-break with a supersonic ace.

And Diego from the feeble joke, has always been decisive in his feats from the baseline and also in the smash, in spite of the naivety of mother nature who only granted him that meter and 70. Audience standing, shouts from the stadium, “Isnerman, Isnerman” and a pity that a backhand from Diego on the match point for the strange couple went off a finger.

Too bad, because if the Croatians hadn’t won in the end (6/2 – 6/7 – 12/10) we would certainly have seen Isner pick up Schwartzman to celebrate. It doesn’t matter, it will happen soon. And for the Pietrangeli audience they won. So much so that during the award ceremony they screamed, as in the stadium “under the curve – under the curve”.