Historic all.blue podium in the women’s 100 meters at the Paralympics 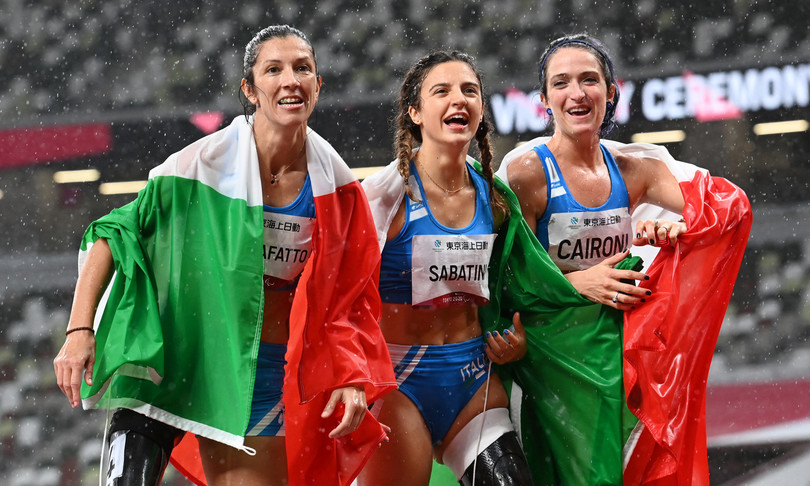 Gold for Ambra Sabatini, silver for Martina Caironi and bronze for Monica Contrafatto: it is historic and fantastic blue trio in the 100 meters of athletics in the T63 category at the Tokyo Paralympics.

Amber Sabatini leads the blue hat.trick in the 100 meters of athletics in the T63 category at the Tokyo Paralympics complete with a world record.

At the Olympic stadium in Tokyo, the one he consecrated on August 1st Marcell Jacobs 100.meter Olympic champion, the 19.year.old sprinter from Porto Ercole graduated from the Paralympic champion by running, under pouring rain, in 14 ”11, a time that is equivalent to the new world record.

Sabatini improved the 14 ”37 that his teammate had raced a few hours before Martina Caironi, then silver in 14 ”46.

To complete a historic result for the Italian Paralympic sport, the bronze of Monica Contrafatto who finished in 14 ”73.

All three blue, Ambra, Martina and Monica, are amputated of a leg at the knee.

The fantastic and historic all.female trio in the 100 meters of the T63 category in athletics raised the medals won by the Italian expedition at the 16th edition of the Tokyo Paralympic Games to 69. A number that means record.

Only on the occasion of the first edition, a sort of ‘experiment’ for Paralympic sport, that of Rome 1960, the Italians managed to conquer 80 podiums but with fewer sports included in the program (there were 8, today there are 22), far fewer nations present (there were 23, today there are 163) and therefore registered athletes (there were 400, today 4520).

With only one blue who will still have to compete, Jacopo Cappelli in the Italian night in the qualifications and eventual final of the 50.meter SH1 mixed rifle, Italy is ninth in the overall medal table with 14 gold, 29 silver and 26 bronze medals in the safe.

The Italian Paralympic sport led by Luca Pancalli in swimming alone he won 39 medals (more than half) with 11 golds attached.