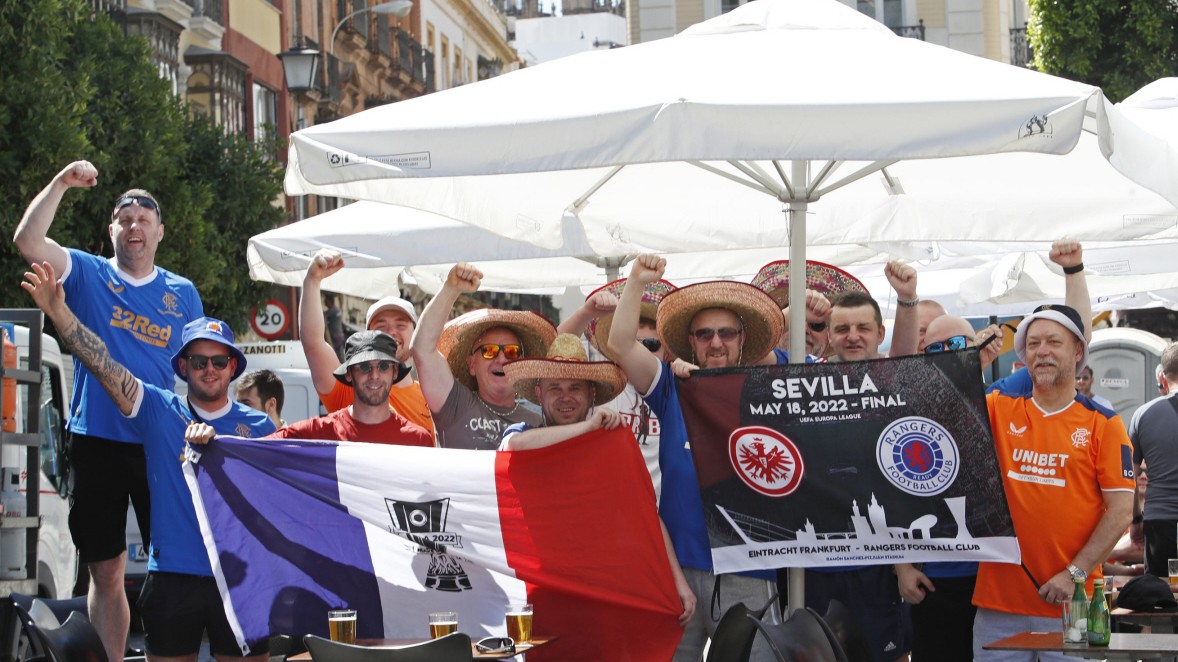 Spain’s Policía Nacional has its big day on October 2nd, at least in religious terms. Because this date is reserved for the patron saint of the police, the Santos Ángeles de la Custodia, the Holy Guardian Angels, in the Catholic Church’s calendar of saints. “Do you think we should dedicate a prayer to them?” a police spokesman asked in Seville on Tuesday when asked about the patron saint of his corps. Well, to put it in the famous words of the composer Maximilian Stadler to Ludwig van Beethoven: It’s no use, no harm.

The Europa League final between Eintracht Frankfurt and Glasgow Rangers is on Wednesday in Seville, accompanied by an unprecedented number of visitors, which General Commissioner Juan Carlos Castro called “a single madness”, “una barbaridad” at a press conference. Seville has 750,000 inhabitants.

On the basis of the registered bookings, one reliably calculates around “80,000 to 100,000 Scots and 50,000 Germans”, but even these figures can turn out to be pipe dreams. 30,000 Scots live in the nearby Portuguese Algarve alone, and it is not foreseeable how many of them will set off from there and other emigration hotspots such as the Costa del Sol, the Balearic Islands or the Canary Islands. The hotel capacities are completely exhausted. But if only that were it.

The Ramón Sánchez Pizjuán stadium does not have enough seats for 44,000, both clubs were only provided with 10,000 tickets, half of the remaining tickets were reserved by the organizing European football association Uefa, the other half went on sale. There will be fans who “under all circumstances” will try to get into the stadium – by force, with forged tickets “or disguised as security stewards”. In addition, both fan camps are known for setting off fireworks both in front of and in the stadium and, if necessary, storming the pitch.

The crowd faced a total of 3,000 emergency services from the Policía Nacional, but Castro did not name the number of private security guards and the local police. For comparison: Not only the charters, ferries and trains to Seville are fully booked. 2000 landing permits for private planes were also issued in Andalusia. A record. After all, the fan groups are not considered hostile, even if they belonged to different political camps. Either way, “It’s the total and absolute challenge,” Castro said.

How long will it stay quiet? “A large part of the fans drink and drink a lot. And if they already drink warm beer in their home countries, they will drink even more here, where the beer is nice and cool,” suspects Castro. Especially since the heat of over 30 degrees is added, “which the residents of Seville don’t notice because it’s normal for them and which invites them to refresh themselves. As you know, water is bland, tasteless and odorless. A beer tastes better ” said the policeman. Local brewery Cruzcampo is expecting a new beer record, the current record being set in a 2003 final between FC Porto and arch-rivals Celtic Rangers.

In any case, the restaurants were forbidden to put furniture on the terraces, on previous occasions chairs and tables were thrown. The police were also concerned about the many construction sites in the city – less because of the obstruction of fan movements, but because there was material that “some” of the fans could also use as projectiles.

“But to be clear: nothing is further from the police than to spread alarm,” said Castro. The residents of Seville would have to be prepared for “a few inconveniences”, for chants that could last all night. What advice does he give to his neighbors? “Patience.”