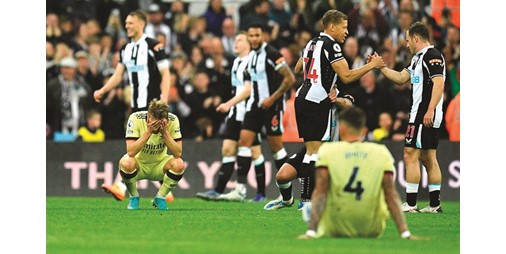 Arsenal manager Mikel Arteta was very frustrated after losing to Newcastle United 0-2 in the Premier League, and said that this performance was not close to the level required to qualify for the Champions League.

“It is very disappointing that Newcastle were 10 times better than us, and the performance was not close to the level required if we want to play in the Champions League,” Arteta told Sky Sports. He added, “This is painful. Things were in our hands, but they are no longer.”

And Arteta told reporters when asked about his frustration with his players: “I am responsible all the time, if someone made the exception this year in a way that no one expected at the beginning of the season, it is this squad of players, and I will defend them constantly, but things were really difficult. ».

And Arteta concluded his speech by saying, “There is always a weak chance in football.”

Ben White (55 fouls on his own goal) and Brazilian Bruno Guimaraes (85) scored the two goals.

Arsenal fell to fifth place after its tally of 66 points, two points behind Tottenham, one stage before the end of the season.

And Tottenham only needs a draw against its host Norwich City in the last stage to guarantee its ticket in the Champions League because it has a goal difference (+24 vs. +9), while Arsenal must win at home to Everton and wait for its neighbor to stumble against the last-placed.