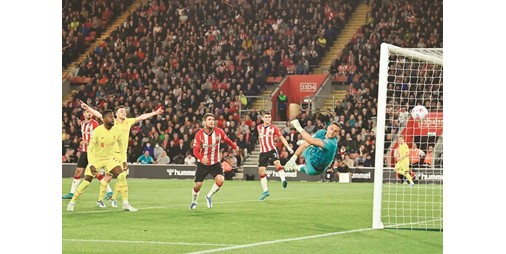 The English Football League title was postponed to the final stage, with Liverpool beating its host Southampton 2-1 in a meeting that the “Reds” fought in a largely auxiliary lineup in the 37th stage, thus keeping its hopes for the historic quartet.

Liverpool’s visit to the “St. Mary’s” stadium, where he fell 0-1 in his last match in the stronghold of Southampton on January 4, 2021, was postponed.

German coach Jurgen Klopp’s team entered the meeting four points behind leaders Man City, who stumbled Sunday against West Ham (2-2), but he managed to reduce it to only a point by winning Tuesday against Southampton thanks to Japanese Takumi Minamino (27) and Cameroonian Joel Matip (67). ), who compensated for his failure with the goal of Nathan Redmond (13), which postponed the decision to the final stage in which he meets Sunday at home with Wolverhampton, while the team of Spanish coach Josep Guardiola plays with Aston Villa at his stadium also at the same time, and Liverpool needs to beat Wolverhampton in a stronghold. Liverpool “Anfield”, and “City” not beat its guest Aston Villa.

Liverpool coach Jurgen Klopp said after the victory that the chance of his team snatching the Premier League title from Man City in the last round, or winning the historic quartet, is unlikely, but possible, and said: “I am very happy with the performance, it was a bit impressive, to be honest. Adding Harvey Elliott, Curtis Jones, Takumi Minamine, Oxlade Chamberlain like Ferraris in the garage, what happened was exceptional because of these boys.

In addition, three postponed matches from previous stages of the English Premier League will be held today, where Chelsea hosts Leicester City (stage 27), while Everton hosts Crystal Palace (stage 33), and the third confrontation, between Aston Villa and Burnley at Al Awal Stadium, in a postponed match. From the 18th stage.

Chelsea is seeking to reconcile its fans after losing the FA Cup title against Liverpool, by achieving victory and exiting the full match points at the expense of Leicester, and the “Blues” occupies third place in the league table with 70 points, 19 points behind Liverpool, the league runner-up, while Leicester He enters the confrontation in high spirits, after winning his last two rounds, the first against Norwich (3-0), and the second against Watford, which ended 5-1, and the “foxes” hope to win and come out with a positive result against Chelsea despite the difficulty of the match, as the Foxes occupy Ninth place in the league standings with 48 points.

Nottingham close to the Premier League

Nottingham Forest will face Huddersfield Town, who previously beat Luton, on May 29 at Wembley Stadium, in the Premier League qualifiers final.

Fulham and Bournemouth qualified directly for the English Premier League after they finished first and second.

Fans stormed the stadium after the match, and British police announced that they are currently investigating the attack on Sheffield United player Billy Sharp (on loan from Nottingham Forest) after the match ended, and the incident occurred after a fan came down, attacked the player and “gotted him.” The footage was captured on video.