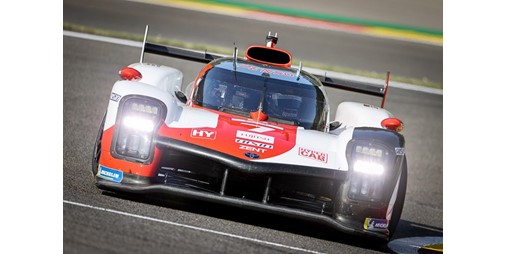 GAZOO Racing achieved its first win of the FIA ​​World Endurance Championship this season, after 6 exciting hours at Spa-Francorchamps, with world champions Mike Conway, Kamui Kobayashi and Jose Maria Lopez in a Toyota GR010 electric vehicle « Hybrid” high-performance, bearing the number 7, as they overcame competing high-performance vehicles, despite the weather challenges that greatly affected the course of the race, to win the second round of the 2022 season, which is the last round before the Le Mans 24 Hours race.

With an impressive performance at Staflo Circuit in Belgium, which extends over 7,004 km, the team celebrated its sixth consecutive victory in the Spa-Francorchamps, as well as winning 7 out of 8 races of the high-performance Toyota GR010 electric hybrid vehicle since its launch in the Grand Prix. Spa-Francorchamps in 2021.

It was a promising start to the race for the GAZOO Racing Team, which showed unprecedented capabilities during the stages. As the race progressed, severe weather conditions caused several accidents, which derailed many vehicles from the race track, which led to a number of interruptions, and the red flag was raised several times.

However, Mike Conway and Kamui Kobayashi maintained their consistent performance throughout the race.

During the last hour and a half, Jose Maria Lopez took the wheel of the Toyota GR010 hybrid electric vehicle, No. 7, to complete the final part of the race.

In light of the turbulent weather, the competition with high-performance rival vehicles became fierce, and Jose Maria was finally able to advance in the final stages, especially as the weather and track conditions continued to improve. Six hours later, he crossed the finish line and took the win by 27.473 seconds over the competing vehicle.

On this occasion, Akio Toyoda, President of Toyota Motor Corporation, said: “I thank Mike, Kamui and Jose Maria for their first victory of the season.

I am very happy with the first win of the new team principal Kamui, and I thank him for his great efforts in managing the team and driving the race car.

Although the heavy rain was a major challenge during the race, we at Toyota believe that vehicles should be safe to drive under any condition.

Like any race we run, this race has gained us important new experiences and data that will help us continue to develop the best vehicles ever that drivers can drive with confidence.

I look forward to the team members stepping up their efforts to benefit from the superior performance of the high-performance Toyota GR010 electric hybrid vehicles, and to put their best foot forward at the next 24 Hours of Le Mans.” And thanks to the fans and the generous audience for their continued support.”

It is worth noting that Toyota has participated over the past years in many motorsports, including Formula 1, the World Endurance Championship WEC, and the “Nurburgring 24 Hours Endurance Race”.

The highly anticipated Le Mans 24 Hours race is the most important event in the World Endurance Championship, and is scheduled to take place on June 11-12, as the GAZOO Racing Team will compete for the fifth consecutive victory in this legendary race.