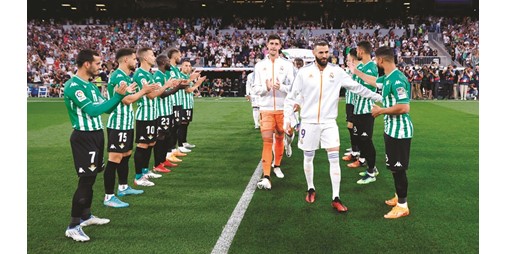 Real Madrid, crowned the Spanish League title for the 35th time in its history, is preparing to face Liverpool in the Champions League final, with a 0-0 draw at home with Real Betis, the cup champion, on Friday in the last 38 stage.

Similar to Real Madrid, the Catalan rival Barcelona is playing a marginal match today at home against Villarreal, after deciding the runners-up with a 5-point lead over Atletico, the defending champion, who in turn is a guest today against Real Sociedad with the risk of losing third place in favor of Seville (a point separates them) without This will affect his participation in the Champions League next season.

The two qualifying seats for the Euroleague competition were also decided in favor of Real Betis and Sociedad.

After the relegation of Levante and Alaves to the second division, the conflict will be five to avoid catching them between Getafe (39 points), Elche (39), Granada (37), Real Mallorca (36) and Cadiz (36).

And there will be a direct final confrontation between the two threats that gather today between Elche and Getafe, while Granada plays with Espanyol, and Real Mallorca will meet with its host and Sasuna, and Cadiz with the relegated Alaves.

Italy.. Milan to win the title

In addition, Milan stands on the verge of winning the Italian Football League title for the first time since 2011, when it is a guest of Sassuolo today in the 38th stage, while its neighbor and direct chaser, Inter Milan, the champion of last season, receives a Sampdoria guest at the same time.

Milan is two points ahead of Inter and is superior to it in direct confrontations between them this season, and therefore the first is sufficient to secure the title and equalize its neighbor in the number of titles in the competition (19) as the second best winner of the title behind the leaders Juventus (36 titles).

Attention is focused on the identity of the team that will accompany Genoa and Venetia to the ranks of second-tier clubs, and the conflict is limited to Salernitana and Cagliari.

Salernitana leads by two points from Cagliari, and the first hosts Udinese, while the second is a guest of Venezia.