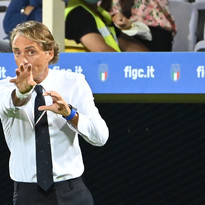 – Maximum yield with minimum risk: this is the national team’s plan to snatch the three points against Lithuania tomorrow night at the Mapei Stadium in Reggio Emilia. On the occasion of the last match of the national mini.cycle, the Azzurri, subjected to a large turnover, aim to consolidate the first place in the qualifying round for the 2022 World Cup– So as to chase away the anxiety of ‘equalizing’ and prepare with greater serenity the challenge at the summit against Switzerland in November.

The imperative is to win, underlines the coach Mancini during the press conference on the eve of: “There are three games left, if we win all of them we are qualified”. The blue coach preaches calm “we are not upset or worried” and reassures the fans about the fogging phase: “Football is this for now: the ball does not enter and in Italy the culprit must be found immediately. We have to isolate ourselves and think about doing certain things better, with a little more precision, then the goals will come ”.

To face the Lithuanian team, last in the standings with zero points in four races, will be a reserve Italy where many news could find space. Especially since a couple of pawns, Verratti and Pellegrini, are unavailable and have already left the retreat as a precaution. “But it will not be an easy match – Mancini warns – they will get behind trying not to concede a goal. We will have to be good at unlocking it immediately ”.

The turnover will have a double objective: avoid the owners the third game in just a week and offer to the new recruits, especially up front, a chance to show off against an opponent within reach. A way also to experiment with new offensive solutions given the difficulty in going online that emerged in recent meetings. Tomorrow evening in Reggio Emilia the Azzurri will take the field with the usual 4.3.3 with Donnarumma in goal.

In defense, Chiellini and with a good chance also Bonucci are destined to rest: in their place Acerbi and Bastoni, the backup pair already seen against Wales at the European Championships– On the right flank Di Lorenzo is a candidate, who has only played one game, threatened by Florenzi and Toloi, on the left instead, Biraghi paws to replace Emerson Palmieri.

In midfield fatigue and injuries draw a triangle formed by Locatelli and the fresh grafts of Sensi and Pessina, with Cristante at the window. A midline that made its debut in the second half in the first leg in Vilnius, complete with a goal from the Inter. Defections also in attack: Immobile and Zaniolo stopped and skipped the finishing session of the afternoon.

In front of the church, therefore, space, among the most brilliant, accompanied by Bernardeschi or Berardi. In the midst of a ballot for the tip that in Reggio Emilia there will also be the club fans: it was a two.way race between the young Sassuolo teammates, Raspadori and Scamacca. On the other hand, the team led by coach Ivanauskas, narrow defeat by Bulgaria in the last match, will be played with a 4.2.3.1.

In attack Dubickas supported by Novikovas, Cernych and Kazlauskas. In the median Megelaitis and Simkus, while in defense, to protect goalkeeper Setkus, there will be Lasickas, Satkus, Utkus and Baravykas. The Lithuanian coach will not be able to follow the game from the bench because he is positive for Covid, in his place will be deputy Urbonas.

The precedents between Italy and Lithuania are few and all in favor of the Azzurri. The two teams have met 7 times so far, five wins for the national team and two draws. The last match was the one played last March 31 in Vilnius, which ended 2.0 for the Azzurri: Sensi and Immobile scored. Before that game the last clash was dated 2007, the same result thanks to a brace from Quagliarella. The only two draws came in 2001 (0.0) and 2006 (1.1). In official competitions Italy and Lithuania faced each other only in the qualifications for the European and World Championships.