Covid in Japanese football: Japan tests itself out of jubilation 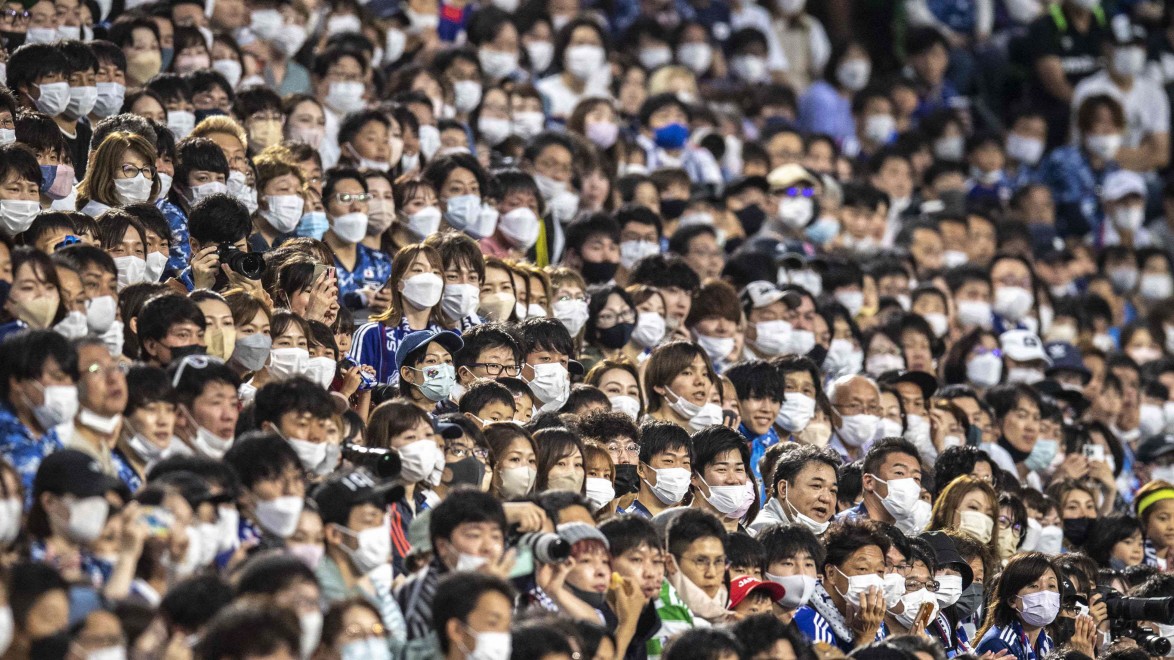 Yoshio Kobayashi always suspected that goal celebration is an urge that football fans can’t suppress. Not even if it would be better to be quietly happy for reasons of infection control. And today, in the third J-League season of the pandemic, as a regular and ardent admirer of top-flight club Urawa Red Diamonds, he can say: the assumption was correct.

The coronavirus was never a reason for Kobayashi to stay away from football. “If we could buy tickets, we went to the stadium.” There he willingly submitted to the rules for corona protection. He wore a mask, refrained from cheering, sang no songs about his favorite team. He thought that was right. He still thinks that’s right. But a total ban on cheering was too harsh. When Urawa put the ball in the net, it triggered a reflex in Kobayashi that he couldn’t suppress. “I cheered.” He openly admits it. He’s a fan, not a robot.

Nobody can do anything against the forces of football love, which is why the Japanese J-League graciously accepts that its three professional leagues cannot remain completely clean when it comes to corona neutrality. Nevertheless, it should currently offer one of the most hygienic gaming operations in the world. Because while the German Bundesliga, for example, seemed as noisy and lively as before the pandemic at the end of its season in May, Japanese football is only very cautiously groping its way out of its pandemic cheerlessness in its current season from March to November.

He hits the Japanese zeitgeist. In the entire island state, people aren’t really ready to break cover. After all, the coronavirus variants are not gone. Nippon’s people continue to wear masks everywhere, most even when alone on the street. Only since June 10 has the Japanese government hesitantly been issuing some visas to tourists from abroad in order to slowly open the country after more than two years of the entry ban. And in the football stadiums things are still going on like at a classical concert.

Excerpt from the J-League Corona rules: “Prohibited actions are as follows: Loud cheering such as singing songs, whistling on fingers, booing.” The audience demands a “uniform cheering style”, according to which “acceptable” are: “Clap your hands, clap, drums and other sounds that can be produced on site.” The cheering is considered a security risk.

Reds fan Yoshio Kobayashi, 51, a real-life company employee, and his son Takahiro, 19, a law student, are on a local train bound for Urawa, a suburb of Saitama in the vast Tokyo metropolitan area. They are on their way to the home game against Nagoya Grampus. Getting to the stadium on foot or by bike is actually also an anti-corona request from the J-League. But that’s difficult for the Kobayashis, because their hometown of Akitsu in Tokyo’s west is a bit too far away.

Wearing Urawa jerseys, they are sober, happy and devoted to their club. “I can watch all games rationally, but with Urawa…” Yoshio Kobayashi chuckles. The Reds are part of his life. He still remembers the successful guest appearances of the German 1990 world champion Guido Buchwald, from 1994 to ’97 as a defender, later as a coach. blissful times And now? Since February 23, 2020, the last matchday without pandemic rules, he has had to deny important instincts of his football fan existence. “Shoganai,” says Yoshio Kobayashi, doing nothing. “My impression is that the J-League has been careful with the pandemic.” No complaints. And Takahiro defends Urawa’s mediocre standings: “Many new players have not yet been integrated.”

Harmony and insight are Japanese virtues. And the mass consumption industry in particular does not want to jeopardize Japan’s decent corona balance sheet. In a survey, the J-League found that 76 percent of fans support the return to the battle cry. But if you’re careful, you can’t go wrong. So she’s in no hurry.

The weekend before last there were the first tests with cheering. In the second division match Tokyo Verdy – Morioka Grulla (2: 2) and in the League Cup second leg of the Kashima Antlers against Avispa Fukuoka (2: 1), a total of around 2000 – of course masked – fans were allowed to sing and scream like in the good pre-pandemic times. Blocks were reserved for the tests in the stadiums, which could only be occupied by 25 percent. The players felt the difference. Hayato Nakama, new to the Antlers, said in the Japan Times: “For the first time I heard cheering at Kashima Stadium and it touched my heart so much.”

But the game Urawa – Nagoya is still under the rest ordinance. Almost 29,000 people came to the Saitama Stadium, site of the 2002 World Cup in Japan and South Korea. Large boards at the entrance explain the access restrictions, mask requirement, temperature control, hand disinfection. You should tear off the ticket yourself at the entrance to avoid physical contact. Nobody needs proof of vaccination or negative tests. And in the grandstands people sit next to each other quite normally.

But they are quiet.

Mumbling before the teams march in. Warm applause as they come. Rhythmic clapping during the game. No chants, no battle cries, not even a single enemy insult. Only when Urawa scores, which happens three times that evening, does a kind of goal scream erupt. He quickly turns to applause. In addition, silent flag waving behind the gates. It’s a beautiful game. But without the noise from the fan stands, it feels like a painting with paint dripping from it.

The fans seem to have gotten used to it. You look, clap, shut up, go home. No big deal. “It will probably continue for a while,” says Toshio Kobayashi. How long? Hard to say. The J-League is planning the next round of cheering tests for July. Then with a total of six games in the first and second division.

One thought on “Covid in Japanese football: Japan tests itself out of jubilation”