End of Martin Hinteregger’s career: At 29 in the club of legends 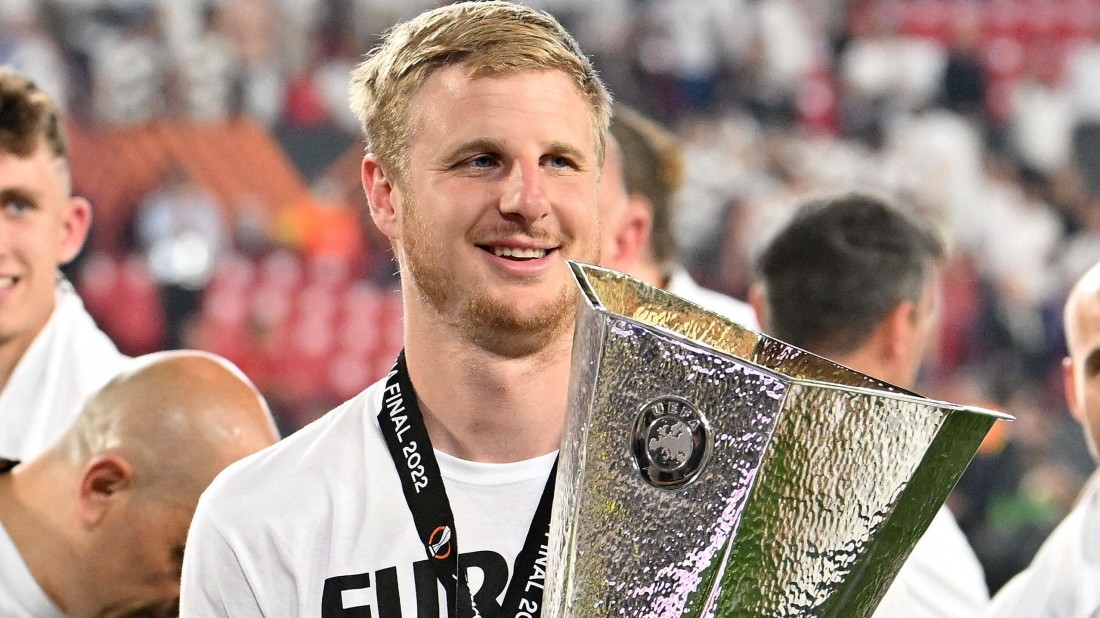 Anyone who was able to speak to Martin Hinteregger in mid-May after the Europa League final in the catacombs of the FC Sevilla stadium was faced with a quiet, almost sentimental person. Due to an injury, he was unable to play a minute of the Frankfurt Eintracht final against Glasgow Rangers. But the fact that Eintracht won on penalties and thus qualified for the premier class meant that compensation was on the horizon: “I certainly don’t want to miss out on the Champions League with these fans,” Hinteregger was to say a little later. Now everything turned out differently.

On Thursday afternoon, his employer Eintracht Frankfurt sent out a press release that was published by the Austrian Crown newspaper with the warning “No kidding!” was provided: “Hinteregger ended his professional career”. At 29 years old. In the best footballer age, as they say.

Hinteregger himself could not be spoken to afterwards, his adviser did not want to make any further comments, “everything was said” in the message. The communiqué reads as if, above all, they had agreed not to inflict further injuries on one another, which had been the subject of so much talk in recent weeks. What was there to read? Among other things, that the same Hinteregger who had been enthusiastic about the Champions League a few weeks ago had wanted to have been pregnant with the idea of ​​ending his career for a long time.

“Last autumn I had my first thoughts of retiring after the season. I was in a difficult phase in terms of sport: My performance was fluctuating. The victories didn’t feel so good anymore, but every defeat hurt twice as much,” said Hinteregger.

So now the end – and the review of the Europa League victory, five Austrian championship titles and four cup wins with RB Salzburg, also 67 appearances in the Austrian national team and 188 games in the German Bundesliga for FC Augsburg, Borussia Mönchengladbach and Eintracht Frankfurt. However, what will also be associated with the name Hinteregger in the foreseeable future: a series of affairs, some of which were due to alcohol consumption, and the recent scandal surrounding the “Hinti Cup”, a tournament for hobby and youth teams in his home town of Sirnitz in Carinthia.

Hinteregger hit the headlines after an article by the Austrian journalist Michael Bonvalot. In an article that appeared in the online magazine Perspektive.press on June 8, Bonvalot made it public that Hinteregger organized the party through a company whose founding members included a certain Heinrich Sickl, “formerly a Graz FPÖ municipal councilor, identitarian promoter and well-known extreme rightist,” as Bonvalot wrote.

The Austrian association was also surprised by the resignation

On Thursday, Hinteregger explained that “a few issues arose recently, the scope of which only became clear to me afterwards”. “Emotional, perhaps thoughtless words” on his part would have led to irritation, for which he now apologizes. Among other things, after the termination of his business relationship with Sickl, Hinteregger called the journalist Bonvalot a left-wing extremist and complained about an alleged media hunt. “To say it again very clearly: I condemn right-wing, intolerant and inhuman ideas in the strongest possible terms. Anyone who knows me knows that,” Hinteregger said on Thursday.

The Austrian association was also surprised by the resignation and announced that Hinteregger would be included in the association’s legends club. Hinteregger is an “individual guy with rough edges that many people and fans could identify with,” said sporting director Peter Schöttel.

Markus Krösche, the manager of Eintracht Frankfurt, also sounded forgiving: “Not least because of his sincere apologies for his behavior in the past few days and weeks and his clear and credible distancing from right-wing ideas, he remains always welcome in Frankfurt as a deserved player and European Cup winner. “

Krösche also spoke of an “unexpected” decision, but the player “presented his perspective and reasons impressively and convincingly”. Hinteregger asked to be released from his contractual obligations, Eintracht agreed to say “baba und fall net” to express it in Austrian. Hinteregger’s contract, which runs until 2024, was only “suspended” for the time being, i.e. put on hold, as Eintracht announced. In other words: Eintracht secured themselves in the event that Hinteregger changed his mind again. If he wanted to play professionally again before the end of the contract, Eintracht could collect a transfer fee.

One thought on “End of Martin Hinteregger’s career: At 29 in the club of legends”