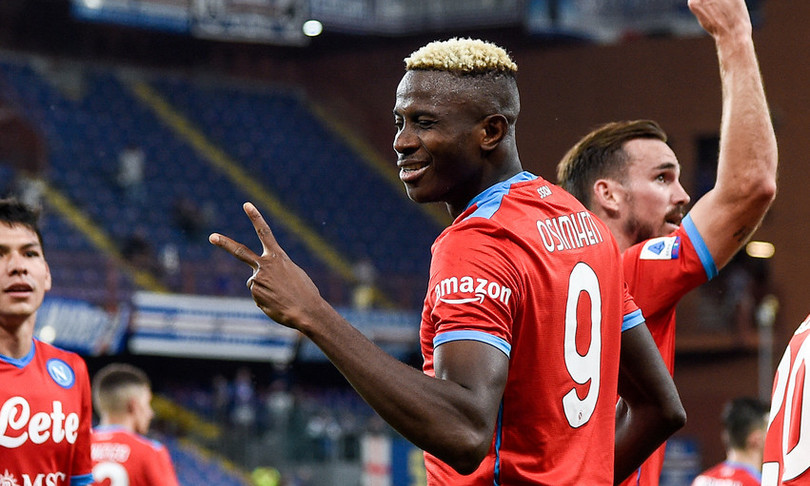 – One super Napoli also beats Sampdoria and continues the race to the top of the standings with full points. In Marassi, Spalletti’s team won 4.0, thanks to a brace from a irrepressible Osimhen and to the seals of Fabian Ruiz e Zielinski scoring the fifth success in a row in five league games.

In Turin, on the other hand, Lazio limits the damage and manages to go home with a draw at the last minute. It ends 1.1 thanks to the penalty of Immobile when the time is up, the momentary catches up advantage of Pjaca. Bitter in the mouth for Juric’s grenades, one step away from the third consecutive success; second even in a row instead for Sarri’s team, who has not won for three rounds and is close to the appointment with the Capitoline derby.

Nothing to do for D’Aversa’s men, forced to a new ko after the recent success in Empoli. The first great chance of the match happens at 7 ‘on the feet of Osimhen, who runs away in speed face to face with Audero practically kicking on the goalkeeper. Just three minutes pass and the Nigerian makes up for it with a bit of luck and the complicity of Audero himself, which he cannot reject a docile shot of the attacker entering the goal with all the ball.

The reaction Doriana, however, is there and arrives at 19 ‘, first with Andrien Silva then with Yoshida, which they commit Hosts in seconds touching the goals of a possible draw. At 35 ‘he comes close also Candreva, inaccurate from the edge with a powerful right. The Neapolitans are reviewed at 39 ‘finding the goal of doubling by Fabian Ruiz, very good at placing a left handed surgical to the corner where Audero cannot reach. At the beginning of the recovery Napoli he closes it well in advance: Lozano runs off to the right and proposes in the center for the rushing Osimhen, who from a few steps can not miss the appointment with the 3.0 and the personal double. Spalletti’s team he does not want to release the pressure and a little lateri also find poker, this time with Zielinski breaking the door with a great left.handed. Sampdoria tries to at least go in search of the goal of the flag, that he would find in the 73rd minute with Candreva’s tap.in, were it not for an irregular starting position of Caputo.

Lazio drew in extremis with Turin

Very little happens at first very balanced, devoid of great ideas and emotions. Sarri’s team tries to make the match unsuccessfully while Juric’s men they look for some flames in the restarta, with Reina who, however, is practically never engaged. Right in the first half final the grenades build the first real goal ball of the match: Aina breaks through on the left and crosses in the center, Sanabria offs the head calling precisely Reina at the first save of the game with the help of the crossbar.

In the second half, Lazio continues to struggle to find spaces, thanks to a Turin that concedes very little and that at 70 ‘goes back one step away from the advantage: this time the protagonist is the newly entered Ansaldi, whose left.handed diagonally (deviated) ends with a nothing on the bottom. The grenades begin to believe it and a few minutes later they find the deserved 1.0 with the newly entered Pjaca, who, as against Sassuolo, finds the decisive flame by taking over from the bench. The Croatian also touches the brace shortly after, denied by a super intervention by Reina on his right from the edge. In the final Lazio tries them all to limit the damage and just at 90 ‘Muriqi wins the penalty kick that Immobile transforms into the 1.1 goal.

Roma wins at the Olimpico and finds a smile again

With so much suffering and apprehension, due to a physical drop in the finish, Rome succeeds in any case to forget the defeat in Verona. Udinese beaten 1.0 thanks to Abraham’s goal: the Giallorossi regain the 3 points and move up to fourth place at 12, waiting for the derby on Sunday. Second knockout in a row for the bianconeri of Gotti, which remain firm at 7 points.

The Giallorossi start immediately strong and in eight minutes they strike even two woods, first with Mkhitaryan that splinters the pole to Silvestri’s right, then with Zaniolo hitting the opposite one in an attempt to put in after the displacement of Cristante on Pellegrini’s corner.

The team of Mourinho continues to play the game albeit losing a bit of pace, but at 37 ‘he finds the blaze to unlock: the credit is all of Calafiori, who does the whole left.handed lane overcoming a couple of opponents and serving Abraham a chocolate to be pushed only on the net for 1.0.

Udinese is not there and immediately tries to react by touching the balance, avoided by a providential intervention by Mancini on Pussetto’s tap.in from two steps. In the recovery the Giallorossi try to hold the ball of the game in hand, and friulani at 62 ‘ they still make themselves dangerous with Udogie, whose left.handed diagonal hisses near the door of Rui Patricio.

With the passing of the minutes the Rome seems to suffer a lot from fatigue sinning of lucidity, not being able to go up and become dangerous in Silvestri’s parts. In the final Udinese he tries with all his last strength available, also taking advantage of the numerical superiority (expelled Pilgrims for a double yellow card, he will miss the derby), but fails in the enterprise of equalizing The bills.