Tatjana Maria in Wimbledon: The mom with the scythe 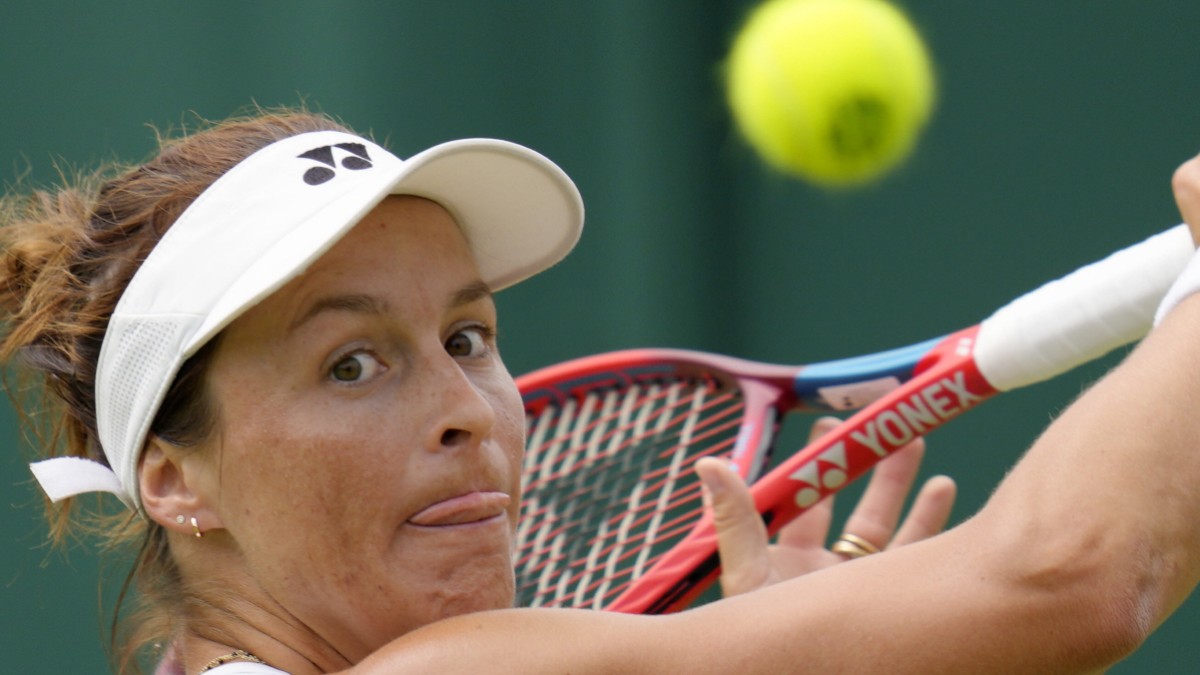 At Aorangi Park, there is a crowd at the entrance during peak hours. From 9.30 a.m. the first professionals march onto the training grounds in the All England Club, teams of the same strength appear, Team Djokovic, Team Gauff, Team Tsitsipas. Then tons of bags are lugged and rackets stacked on top of each other are carried.

When Tatjana Maria shows up, she first pushes the stroller in.

Cecilia, 15 months old, looks around curiously. Charlotte, the eight-year-old first daughter, is always on the go. Most people here know her, so sometimes someone says to her: “Well, champion!” Tatjana Maria often does not find her way to her practice center immediately. She is constantly greeted, a hug here, a friendly sentence there.

The woman who masters one of the most venomous, nasty shots in tennis to near perfection is undoubtedly a nice person. If you ask around, many of my colleagues say that too. At least those who don’t have to be on the pitch with Maria.

Tatjana Maria from Bad Saulgau, who has long been a world traveler with her family, has once again drawn attention to herself in Wimbledon. Three wins in a row at a Grand Slam tournament, she had never achieved that in her professional career, which began in 2001 under the maiden name Malek. She has never made it to the round of 16 either. Until now. On Friday, in the third round, she surprisingly defeated Maria Sakkari, the fifth in the world rankings from Greece, who stabbed the balls that Maria sent off with her forehand in a row into the net. No, their style of play hasn’t changed even with an enlarged family.

In March, Maria won the final in Bogota, her second title on the big tour.

The American Serena Williams is generally considered the most famous mother on the tennis tour, the 23-time Grand Slam winner had daughter Olympia in 2017. Basically, however, Maria’s story should receive much more attention. Not only does she fly to tournaments sporadically, she also tinkers around at many ITF tournaments, the series below the WTA Tour, in which she has already won 16 titles. Every year Maria also appears on bigger stages, only in March did she win her second WTA tournament in Bogota, in singles. She’s also good at doubles, she’s won four times in this discipline.

Her success at Wimbledon is also so special because this place is closely linked to her own path. She played at Church Road in the first round when she was pregnant with Charlotte. In her first Wimbledon participation after the daughter was born, she reached the third round in 2015. Now, with a second child, things are back on track, leading Maria to conclude before her game against Sakkari: “I should have more children.” She laughed out loud. She already radiates a wonderful lightness.

She also got to know the dark side of life. In 2008 she suffered a pulmonary embolism due to a thrombosis, shortly afterwards her father Heinrich, to whom she was close, died of cancer. Her career as a tennis pro was not progressing well until she met private tennis coach Charles Edouard Maria in 2012. This relationship had a great impact, it was as if Maria had found her purpose after moments when she had struggled with her job.

“Family comes first. And tennis comes second,” is how Maria describes her approach to everyday life

Serena and Venus Williams were her neighbors in West Palm Beach when Charlotte was born, and the scene’s famous tennis sisters even threw a baby shower for Maria. She is well connected and respected in the tennis cosmos, even as a third-row player. “Family comes first. And tennis comes second,” is how Maria described her approach to everyday life on Friday.

She and her husband are always trying to create more awareness that the WTA Tour needs to do more for mothers. She also spoke about some problems in Wimbledon, so the time of the match was hardly taken into account. With children, it is always important to ensure their care, which is only offered at Grand Slams. Another point that Maria regrets.

She thinks it’s “a shame that there isn’t childcare at the bigger tournaments like in Indian Wells or Miami”. That would also be good for the children of the pros. “It would be nice if everything would change a bit,” said Maria. “You could help families to come back. I think I’m a very good role model to be back on the tour with two children. And to play tennis at a high level again.”

Maria also cannot understand that players who are taking a break due to pregnancy are treated like injured players. However, she never presents her criticism with the tone of a complaint or accusation. Rather, it sounds pragmatic. It is also significant how she separates tennis and family. “I wouldn’t cry in front of my kids over a tennis match,” she said with a smile.

After the win against Sakkari, however, a few tears flowed. This moment touched her. And she would never argue about tennis with her husband Charles Edouard, who is also her coach. “He sets the line, I try to implement it,” she said after the Sakkari match, in which she acted tactically brilliantly.

Your tennis game is different than 99 percent on tour. Maria doesn’t keep hitting her opponents with her slice shots because she can’t topspin. She just noticed that she plays more successfully that way. “In general, I know that everyone is stressed,” she explained. The opponents are not used to tennis like theirs. “So of course it’s an advantage for me.” Especially on grass, on this fast, very special surface, she could “hurt” the others. Sakkari’s mini-comment after the match spoke volumes: “Praise to Tatjana. She played very well. She played her game. I couldn’t get my game plan together.” She was in a really bad mood. Tatjana Maria had struck, the game plan destroyer.

In her first Grand Slam round of 16 against Latvian Jelena Ostapenko, she will remain true to her style, which will now become interesting again: whether the Latvian, who quickly becomes impatient, who practices a kind of table tennis, will play Tai Chi tennis Maria’s okay. Maria herself always reaches her limits when others overpower her, play too fast. However, she doesn’t have to train her parade shot every time, “I can also play the slice at night. I don’t necessarily have to train it,” said Maria, emphasizing: “My slice,” the sharp scythe, “will stay.”

The coach criticizes Oršić: He must be better. He came from Zagreb, where football and everything is different

Messi and Co. in crisis before Bayern duel: "This is insufficient"