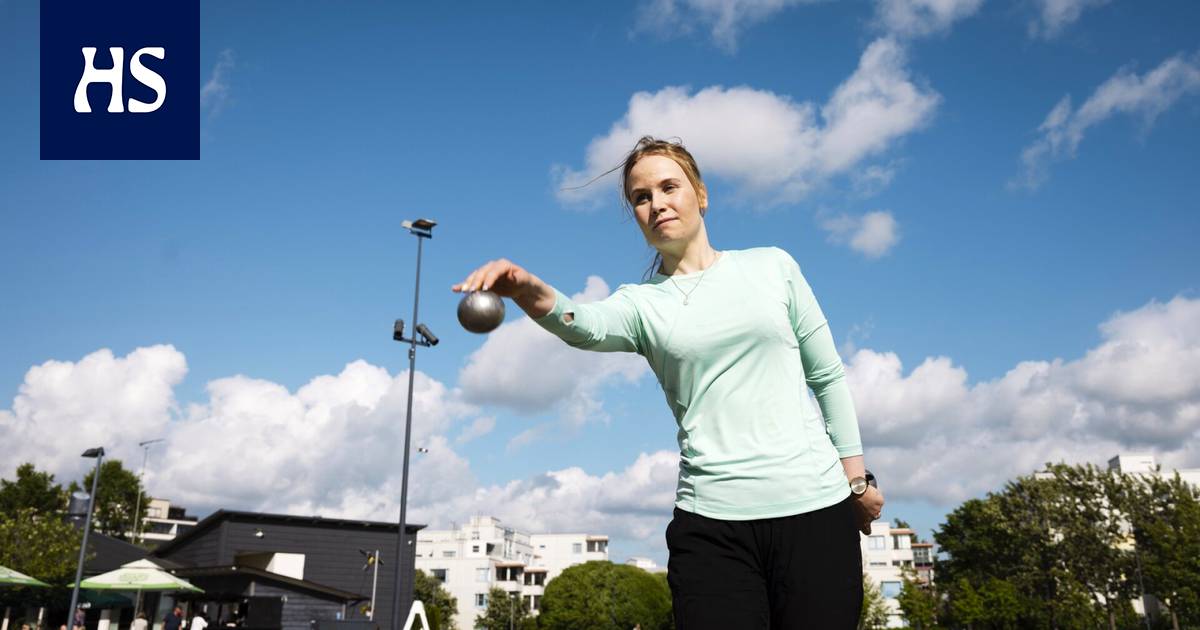 Tiia Salo is usually in the role of shooter in petanque. He tells how the throws are more successful in the cabin race as well.

Click! There is a clatter when metal hits metal. The sound tells of a ball weighing 690 grams hitting a similar ball waiting on the sand. Before the hit Tiia Salo shot the ball in a beautiful arc towards its target.

Salo is also a shooter.

“I was 11 years old when my father started playing and enticed me to join. It was father-daughter quality time. I went to the first WC when I was 12 years old, and in the same year I went to the Junior European Championships”, says Salo.

The sand of the beach park in Järvenpää is familiar to 22-year-old Salo, even though official competitions are no longer organized there. Salo, who lives in Hyvinkää, represents Petanque Sport Club Järvenpää.

“The races were once again a top experience, as participating in prestige races always is. We got to experience success as individuals and as a team, even though we didn’t get to show our best game. This is good for continuing to hunt for next year’s representation,” says Salo.

“I like to keep the game tactically simple. In my own games, I shoot a lot if the throw just goes well.”

The usual many people know how to cheat, but very few shoot.

Petanki shooting is exactly what it sounds like. The sport is anything but easy.

There are five different tasks in the shooting competition, in each of which you shoot, i.e. throw, from four different distances between six and nine meters. There will be a total of 20 throws, and each throw can be worth 0, 1, 3 or 5 points. So there are a total of 100 points in the division.

A shooter is also needed in the competition of teams of two or three. At that time, in addition to the shooter, the team has a setter. The setter aims for the same bullet near the snad, and the shooter removes the opponent’s bullets. Salo is usually in the role of a shooter.

“I like to keep the game tactically simple. In my own games, I shoot a lot, if the throw just goes well,” says Salo.

Tactic is an important part of the game, at least when there are skilled players on the field. Shooting with lumpy balls found by chance in the warehouse is only remotely reminiscent of the games of summer cottage residents.

“We don’t always try to throw close to the snad, but leave the ball further away. In this case, by shooting, you can’t leave your own bullet right next to the snad.”

There is also a difference in throwing styles.

There is quite a range of styles in cottage petanque. The worst mistake is often the position of the throwing hand. The ball should be held in the palm with the palm down and the knuckles up.

A brisk backward swing of the hand brings power to the throw. This way, the ball can be thrown in a higher arc with a lower twist, and the ball stops much more precisely in the desired place. The tops also throw the ball with a side twist.

“No one throws in the ‘mölkky style’ at the games. The throw is much more controlled when you throw straight,” explains Salo.

“It’s worth taking a look at the ground you’re throwing at. Then at least they don’t throw stones on purpose.”

Own tactics also affect what kind of distances you should throw. According to the rules, snadi must be thrown 6-10 meters away from the starting circle, but throwing close is not always the easiest option.

“I have noticed that six meters is quite a challenge. I easily put on the brakes, and the throw doesn’t go technically right. I like to play at distances of 7-9 meters.”

If the snad throw fails, the opponent may place it at any distance.

“If you notice that the opponent can’t really fly to ten meters, then we’ll take him there.”

Tactical in addition to the eye, you also need an ordinary eye. Before the throw, the setter examines the sand and makes a light descent mark to aim for.

If the bottom is soft or there are stones among the sand, try to throw the ball closer to the snad than on a hard and flat surface.

“A hard and uneven road surface can throw a bullet to the side from almost any point.”

“I have come across the most interesting fields. The value competition fields are united by the fact that a large stone (diameter 3–4 centimeters) has been brought there. A good player knows how to read the field,” says Salo.

This is Salo’s second tip for those playing pétanque in the cottage yard or on the yard road.

“It’s worth taking a look at that country. Then at least they don’t throw stones on purpose. You have to be aware of what you are throwing at.”

The feet must remain inside the throwing ring until the ball has hit the ground. Picture: Rio Gandara / HS

Racing tank and cottage petanque are quite different from each other. Real balls are balanced and wear-resistant, unlike the ones bought from gas stations or supermarkets.

In addition, the place where the cottage petanque is thrown is not necessarily the most favorable for success, but the forest road can often serve as the stage for deciding the kingdom of petanque.

“It’s often quite a lottery game. The hard and uneven road surface can throw the ball to the side from almost anywhere.”

It can be a good idea to avoid high throws if you don’t want to repeatedly dig the ball out of a ditch full of nettles.

“It’s fine to throw a typical petanque in such a way that the ball rolls a little longer.”

Then just set and shoot.

Read more: Kristian Kuoksa throws a Frisbee further than perhaps anyone else in Finland for two reasons – this is how the trick succeeds

Read more: Jasmin Suomalainen set a huge Finnish record in darts – the sport has rules that are worth learning

The size of the ball is chosen according to the thrower’s hand. Picture: Rio Gandara / HS

■ Game formats: Two teams of 1–3 people. If there are 1-2 players, the players have three balls. If there are three players, each player has two balls.

Another game mode is shooting. Its rules can be found in the Finnish Pétanque Association from the pages.