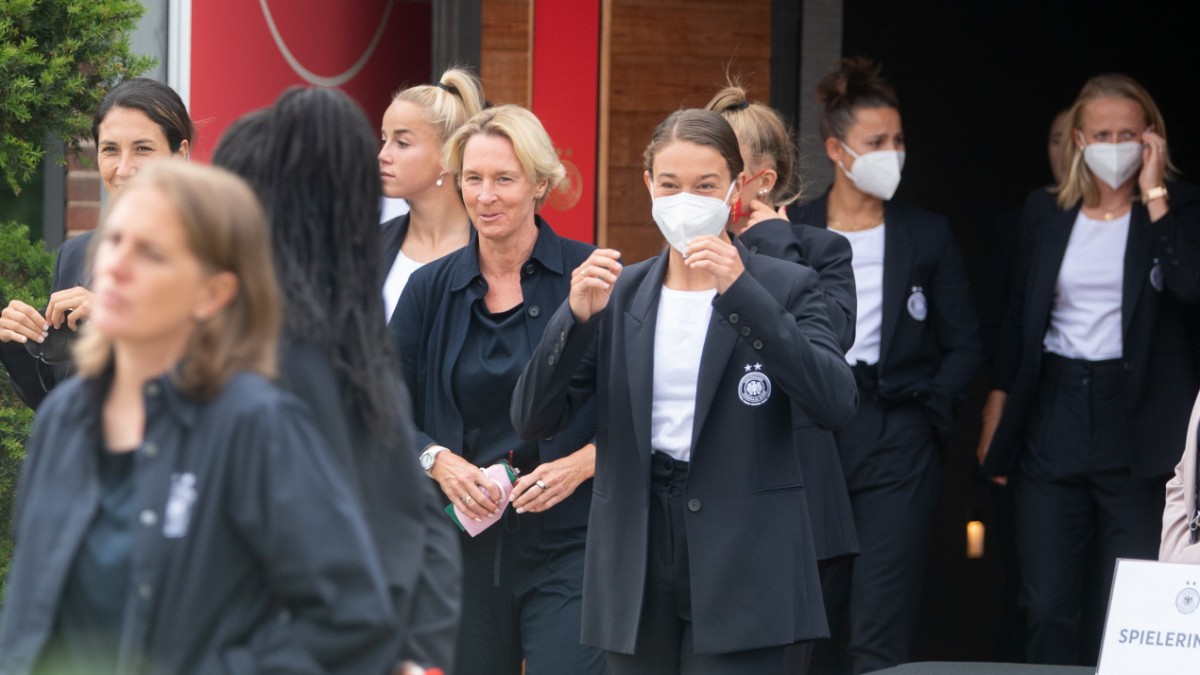 The man looked quite dapper in his dark blue suit, tie, and well-groomed beard. However, he was still unable to enter the hotel by the tiny side entrance despite this. The black gate was open, but not for everyone. It had privacy tarpaulins attached specifically for that purpose. The gateman had to show other equally well-dressed individuals a different way to get to the hotel, where a wedding was reportedly taking place on Sunday, throughout the course of the day. Until finally, at 5:20 p.m., the German women’s national soccer team—the sole organization given exclusive admission through this gate—arrived.

The large white bus traveled down the small street and stopped at the gate between thick bushes on one side and a strong brick wall on the other. The delegation’s national coach Martina Voss-Tecklenburg was the first to emerge and welcomed those who had arrived a bit earlier at the base for the European Championships in England. The journey had begun in Frankfurt via charter plane. The 54-year-old was followed by one national player after another until skipper Alexandra Popp formed the climax with a welcoming, carefree “Hello!”

The environment the German selection found itself in on Sunday is not unusual. For the international match versus England in 2019, she stayed at the Hilton London Syon Park. A lodging location that brings back pleasant memories: At that time, Wembley was nearly packed with nearly 78,000 people, and the Germans won 2-1. On July 31, the final will be played at this stadium, where they would also like to return. This tournament should go more smoothly than the previous ones. It was already ended in the quarterfinals of the 2017 European Championship against Denmark and the 2019 World Cup against Sweden.

Ideal base camp till the semifinals would be the four-star hotel to the west of the English city.

Even if European title number nine and World title number three failed to materialize, the overall environment was superior than that of prior major competitions. Prior to 2017, the national team stayed occasionally in the same hotels as the competition and in some cases right in the midst of the city. 2022 matches the current circumstances with lovely surroundings and the fundamental idea that the base camp should be the four-star hotel to the west of the English city until the semifinals. The neighboring Brentford Community Stadium with 17,000 seats will host the group matches against the European Championship runner-up Denmark this Friday (9 p.m., ZDF) and title contender Spain (July 12). Before they can advance to the quarterfinals, they must go to Milton Keynes to play Finland on July 16.

After passing through the black gate, Linda Dallmann declared, “I think this is a place where we can and will feel comfortable. “That is crucial, especially during a competition. It’s simpler because we’ve been in this situation before.” The national team has access to a separate section, a side wing with balconies, a patio, and a garden, where the players stay in single rooms.

If it weren’t for the incessant roar of aircraft heading into Heathrow, you wouldn’t think you were in a city on the grounds of the Duke of Northumberland in the 56-hectare Syon Park, which borders the Thames. The surrounding area of the castle-like Syon House appears to be the perfect place for a retreat to get ready for the approaching duties, with its expansive meadows, big trees, and lake.

“This European Championship will be really close, and it will also depend on game luck and little details. Cool opponents who can actually do something will be ours “In an interview with SZ, the national coach made the statement. It has been a while since Germany has consistently won tournaments as a matter of course. In fact, completing the difficult group phase is your team’s top priority. Therefore, the first target is quarterfinals. We understand that our group won’t be simple, said defender Kathrin Hendrich. We don’t have to hide, though.

The crew this time had three years overall, which gave them a lot more time to get to know one another.

One thing has changed between 2017 and 2019: The national team did not have a lengthy collaborative preparation session for either the last European Championships with Steffi Jones (ten months) or the World Championships with Martina Voss-Tecklenburg (five months), and the squad had also changed. The DFB ladies had three years of preparation behind them this time, which culminated in June with three training camps and a 7-0 victory over Switzerland. “In the end, our goals were surpassed. We had a ton of issues to work on, “said Voss-Tecklenburg just before departing. We made good use of the time by using it productively.

The defensive was not necessary in theory because the Swiss were scarcely a concern. However, it turned out that the Germans cast better votes, the game went better, and it felt stricter. In the next days, everything that hasn’t gone as planned should be resolved in order for the start against former Wolfsburg attacker Pernille Harder of Denmark to be a success. On Monday, the Grasshoppers Rugby Football Club fields hosted the first practice. There can only be one winner, and that’s us, if we bring our strengths to the field and the zeal we displayed against Switzerland, said Svenja Huth on Monday.